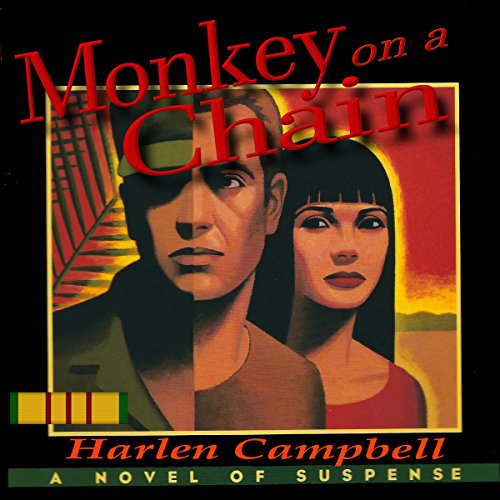 Monkey on a Chain

Nearly two decades after the fall of Vietnam, the knot of corruption and deceit that Rainbow Porter thought was safely buried in the alleys off Saigon's Tu Do street begins to unravel. An old comrade is blown apart. His Vietnamese daughter, April Bow, appears at Rainbow's mountain sanctuary with a cryptic message and a hidden agenda. The careful feelers Rainbow puts out to his old friends return disquieting news - a fortune is missing, a dead man may have resurrected himself, and the heart of the storm is sleeping in his spare bed. Violence threatens to explode with every step as April and Rainbow follow a trail of greed and guilt which seems to reveal, with every surprising turn, a deeper connection between them.

Rainbow Porter has retired from Viet Nam and the many corrupt business deals he did there during the war.  He and his associates made millions, all of it successfully laundered and taxed.  He’s had years of peace and quiet, until April, the daughter of one of his associates shows up, running from the murder of her adopted father.  Rainbow’s retirement has just come to an end.  Someone is out to kill April, Rainbow, all of his associates.  Who and why is the question.

Rainbow was the enforcer of the group of soldiers turned businessmen in Vietnam.  Violence doesn’t scare him; it is how much he enjoys it that does.  He and April begin their journey across the country and parts of Mexico to discover why the old network of friends has begun to unravel.  Why after nearly two decades of peace?  Slowly the clues lead them to even more questions.  Who is April’s father and how is she involved?  Nothing is as it seems.

Monkey on a Chain holds the listeners attention throughout.  The setting of Viet Nam may seem like ancient history to younger listeners, but for anyone over 50, the unfortunate war will bring back memories of its tragedy and broken lives.  The mystery portion about money and vengeance is often convoluted and somewhat difficult to follow.  It isn’t really that important.  The story is more about the relationships the soldiers had with each other and their shared connection to April’s mother in Viet Nam.  In this, the author does a good job.

Brett Archer performs the book with his gritty voice, like a wizened soldier telling you his story deep in the night over a bottle of whiskey.  The violence is just one of those things you had to do.  He does a great job and the listener feels the personality of Rainbow through his voice. He is a very good match for story.

Overall, this is an entertaining story.  Part mystery, part war, part political corruption, part love story.  Depending on your age and experience, you will relate differently to the memory of the Viet Nam war.  Human tragedy, however, is universal.  Well worth a listen.

Audiobook was provided for review by the author.

[If this review helped, please press YES. Thanks!]