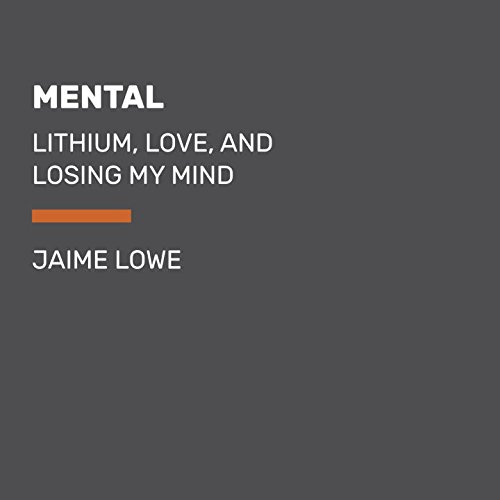 "Lowe writes with verve and rhythm and willed forthrightness about her endless search for stability and sanity, and about wondering which self - stable or unstable - is the real one, worthy of love." (Jia Tolentino, The New Yorker)

"I love intense, messy, self-aware stories about humans and all their brokenness and fallibility; I love books that intermittently make me laugh and cry; and most of all, I love when those stories in those books are emotionally written, and make me think about and remember them for days. Jaime Lowe's new memoir of mental illness delivers all of this.... Through it all, there's honesty and steady-handedness, humor and beauty, reflections on, and a coming to terms with, what it means to be vulnerable and different walking around this world." (Jennifer Romolini, Shondaland.com)

A riveting memoir and a fascinating investigation of the history, uses, and controversies behind lithium, an essential medication for millions of people struggling with bipolar disorder.

It began in Los Angeles in 1993, when Jaime Lowe was just 16. She stopped sleeping and eating and began to hallucinate - demonically cackling Muppets, faces lurking in windows, Michael Jackson delivering messages from the Neverland Underground. Lowe wrote manifestos and math equations in her diary and drew infographics on her bedroom wall. Eventually hospitalized and diagnosed as bipolar, she was prescribed a medication that came in the form of three pink pills - lithium.

In Mental, Lowe shares and investigates her story of episodic madness as well as the stability she found while on lithium. She interviews scientists, psychiatrists, and patients to examine how effective lithium really is and how its side effects can be dangerous for long-term users - including Lowe, who, after 20 years on the medication, suffers from severe kidney damage. Mental is eye-opening and powerful, tackling an illness and drug that has touched millions of lives and yet remains shrouded in social stigma.

Now, while she adjusts to a new drug, her pursuit of a stable life continues, as does her curiosity about the history and science of the mysterious element that shaped the way she sees the world and allowed her decades of sanity. Lowe travels to the Bolivian salt flats that hold more than half of the world's lithium reserves; rural America, where lithium is mined for batteries; and lithium spas that are still touted as a tonic to cure all ills. With unflinching honesty and humor, Lowe allows a clear-eyed view into her life and an arresting inquiry into one of mankind's oldest medical mysteries.

What made the experience of listening to Mental the most enjoyable?

Thank you for sharing your story. I was led to your book by a friend that works with your father. My husband is BP2. I find stories like yours are always helpful to others who suffer from, live with, or should just know what it's like to live with mental illness.

What was one of the most memorable moments of Mental?

Your in-depth information on your lithium, research, and then delving into the new drugs was so very helpful and informative, thank you.

What does Jaime Lowe bring to the story that you wouldn’t experience if you just read the book?

Her personal narrative with inflections and dramatization where she knows it belongs.

Best book on audible about mental health. Hope she records her ODB biography for audible!

Lowe's recounting of her journey through mental illness is both harrowing and inspiring. I was hooked immediately, from the first chapter. Lowe's writing style is distinctive and brilliant. I have never encountered such dazzling metaphors. Lowe allows the reader to truly visualize and envision what it means to be unwell. There was simultaneous critique and appreciation for psychiatric medication, giving a realistic portrayal of both the benefits and side effects of medication. I have recommended this book to a number of folks and will come back to listen to it many times, if only for inspiration for my own writing.

Typical creative non-fiction structure, but without anything to keep the reader (listener) interested. Narration obnoxious. Not my cup of tea.

Jamie's fabulous writing pulled me through the entire book. I am grateful she had the courage to write her story so that others could more deeply understand the condition to create empathy and compassion for those that suffer with bipolar.

Recommend for Healthcare Providers, and anyone else

This may be my favorite book of all time. I’ll miss JL’s voice. She has such a strength in storytelling and making her experiences clear and vivid to a listener. Bipolar I is a condition that’s not common for providers who haven’t lived it to empathize with. I’m about to start a residency in psychiatry and it feels like going in blind for most of us. Memoirs as open and honest as these are invaluable to us, helping us understand what the journey of an illness can feel like outside of the IP/OP soundbites. I’ve been close all of my life to others struggling greatly with their mental illnesses. Reading this, I felt less alone. Thank you so much, Jaime. I’m going to donate a copy to my hospital library.

I can't get a refund

Following the. refund process round and round ultimately dead ends at a page that says I have no books in my purchase history. I've listened to the first chapter and don't want to listen to any more because it is melodramatic, and the author narrates it self-consciously and with voice fry.