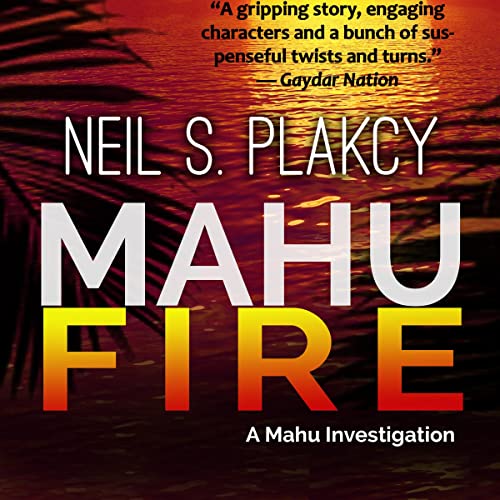 Mahu Fire, the third Mahu Investigation from Lambda Award finalist Neil S. Plakcy, begins as openly gay Honolulu homicide detective Kimo Kanapa’aka attends a local charity event in support of gay marriage. When a bomb disrupts the gala, Kimo, his family, and friends are thrust into a deadly contest between the forces of good and evil.

A wave of religious fundamentalism sweeps through O’ahu, at the same time as violence against gay and lesbian-owned businesses is on the rise. Coincidence? Kimo doesn’t think so. Working with hunky fire inspector Mike Riccardi—day and night—Kimo digs through the ashes to discover a motive for the attacks, as well as who is behind them.

Mahu Fire showcases a handsome, sexy hero who struggles to overcome personal troubles and makes private sacrifices for the public good. Throw in an exotic tropical locale, plenty of aloha spirit, and a dash of surf culture, as well as a slam-bang ending that puts Kimo and the people he cares about in danger, and you’ve got the makings of a thrilling mystery.

Plakcy has won the Left Coast Crime award for best police procedural, and been a four-time finalist for the Lambda Literary Award. Perfect for fans of Joseph Hansen, Michael Nava, and John Morgan Wilson.