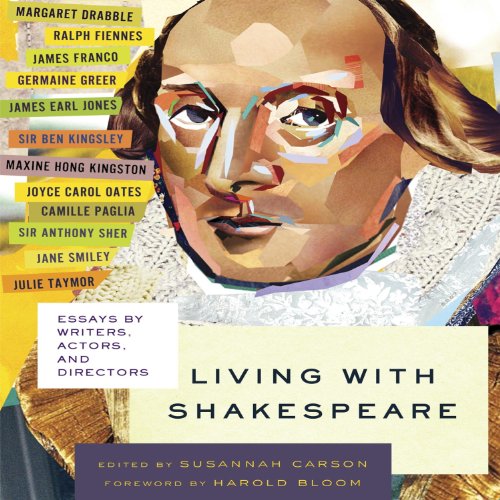 Why Shakespeare? What explains our continued fascination with his poems and plays? In Living with Shakespeare, Susannah Carson invites 40 actors, directors, scholars, and writers to reflect on why his work is still such a vital part of our culture.

We hear from James Earl Jones on reclaiming Othello as a tragic hero, Julie Taymor on turning Prospero into Prospera, Camille Paglia on teaching the plays to actors, F. Murray Abraham on gaining an audience’s sympathy for Shylock, Sir Ben Kingsley on communicating Shakespeare’s ideas through performance, Germaine Greer on the playwright’s home life, Dame Harriet Walter on the complexity of his heroines, Brian Cox on social conflict in his time and ours, Jane Smiley on transposing King Lear to Iowa in A Thousand Acres, and Sir Antony Sher on feeling at home in Shakespeare’s language. Together these essays provide a fresh appreciation of Shakespeare’s works as a living legacy to be read, seen, performed, adapted, revised, wrestled with, and embraced by creative professionals and lay enthusiasts alike.

A treasure-trove of goodies for lovers of Shakespe

If you enjoy Shakespeare’s plays you’ll love this audiobook. It’s a potpourri of essays from actors, directors, writers and academics that reveal insights into the plays. Inevitably some essays are more engaging than others but that will depend on your particular interests. Hearing actors talk about a performance I’ve seen was fascinating and often revealed just how much thought and effort an actor has put into his or her interpretation. There are some humorous contributions that leven the more serious contributions. such as the essay by one of the Reduced Shakespeare company’s founders and another by a comic strip writer.

Don’t be put off by the pedantic and self-reverential first chapter by Harold Bloom that seems in the wrong place as the next chapter is an introduction to the recording by Susannah Carson. However, Audible tell me that the chapter order is correct.