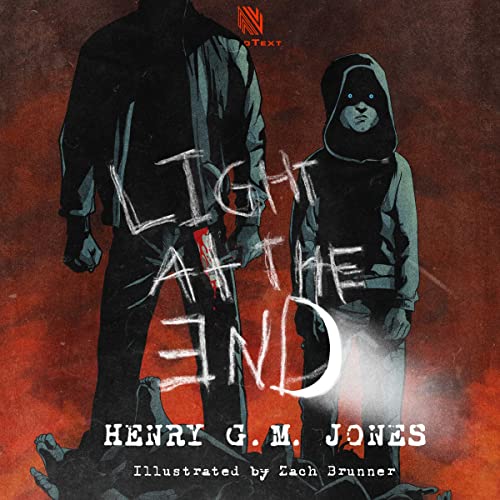 Light at the End

A stunning debut novella that severs the heart with horror and sutures it with hope.

Gordon would give anything to have Wyatt back. He'd risk and sacrifice all he holds sacred to hear his child's voice again. Nothing will bring that voice back. The dead are dead, and they do not speak, but they listen. They hear. And sometimes...they heed the call. The dead cannot touch, but they can guide. They cannot ask, but they can answer. They have no voice...but they can lie.

Wyatt's restless spirit returns to point the way to his killer. Gordon failed his son. He can't bring him back, but he can bring him justice. Whatever it takes, whatever the cost, he'll pay it. Anything for his boy. Anything.

“Light at the End is a bloody tale of vengeance that transcends life and death. Henry Jones has crafted a unique blend of James Ellroy and Don Winslow, with achingly real characters driven by heartbreaking loss towards the hope for redemption and forgiveness." (Graham McNeill, New York Times best-selling author of A Thousand Sons)

"Henry Jones has taken one of the hardest subjects any writer can face - endangered children - and written a story as heartfelt as it is breathtaking and inventive. Light At The End will astonish you as it wrings you out." (Smith Henderson, author of Fourth of July Creek)

"Light At The End is a powerful debut, both wrenching and thrilling. Henry Jones has crafted a harrowing tale that blends action and phantasm which will break your heart and mend it again." (Ivy Pochoda, author of Visitation Street)

"Light at The End is an old-school crime noir, and my favorite kind of ghost story, too. It is, at turns, loving, terrifying and heartbreaking. I couldn't ask for anything more." (Geoff Herbach, author of Stupid Fast and Hooper)

“A genre-bending gut punch of revenge and redemption. Jones wields a sentence like a meat cleaver, cutting to the emotional bone. A must read for fans of crime drama and the supernatural.” (Steven S. DeKnight, Executive Producer, Spartacus & Marvel’s Daredevil)

"To be a writer you have to have a God complex. But you also have to have a Satan one. Because the devil is in the details. And Henry Jones has just served up a piece of fugitive-style noir so detailed, so impressive and insightful and plotted, that the title, Light at the End, well, you just hope hope hope hope it’s true. No matter what you’ve done. If you like crime, and I do. Probably too much. If you love stories that matter, and they’re the only ones I care about, then read this. You’ll thank me every time you do. And Zach Brunner’s illustrations are pitch perfect. Pitch black perfect." (Jim Krueger, Eisner Award Winning writer of Earth X, Justice and Foot Soldiers)

About the author: Henry has written for film, television, video games, commercials, some other things he forgot, and he made up fake reviews for a dining app. This is his first novella. Lucky you. If he wanted you to know more about him, he'd have penned an autobiography.

About the illustrator: Zach is a New York-based illustrator who has been drawing professionally for the past ten years. His career has spanned from commercial storyboards to comics to concept art.

Gordon has lost his son, Wyatt, to death. The overpowering need to have his son back is overwhelming. Wyatt’s spirit is restless and Gordon realizes he must give his son justice. Gordon begins his journey of justice and revenge.

Light at the End was written and narrated by Henry G.M. Jones. You might shy away from the combination of this beginning the author’s debut story and the fact he narrated it. Don’t. This is an amazing listen. Not only was this well-written and emotionally compelling throughout, it was also excellently narrated.

Editing, quality, and production were on par with most books I have listened to.  It was clear, no issue with sound or quality.

This book was believed to rate higher than the standard five-star rank. Therefore it has earned and been awarded the prestigious Audiobook Reviewer’s Choice Award.

Disclaimer: This Audiobook was provided free of charge by the author, narrator, and/or publisher in exchange for a non-bias, honest review.

Great story and performance. Once you start you can’t stop. Fast pace with a lot of twist. Well done Henry Jones!

Henry has a great voice for audio book narrations. I truly enjoyed the book. Hoping he narrates many more in the future. Similar cadences to Will Patton.

Stop what you are doing & read now!

Just finished and weeping in my car in a public parking lot - good times.

Such a powerful, poignant and emotional story about love, loss, vengeance and what it means to be human. One of the best stories I have read/heard in a really long time. And hats off to the writer who also narrated capturing all the rage, pathos and humanity embeds within the story.

If THE SIXTH SENSE had a child with SE7EN and wrote a book it would be LIGHT AT THE END!

A must must listen!

Fantastic soul tearing book that will make you hug your loved ones just a little harder. Henry G. M. Jones’ written and spoken prose will keep you wanting for more. Bravo Zulu to this fantastic Author!

What a great book

I'm really hoping that there will be more book in this series. I'm not sure that I would say this book is a horror book I would say it's more supernatural. All and all great book go ahead and buy it.