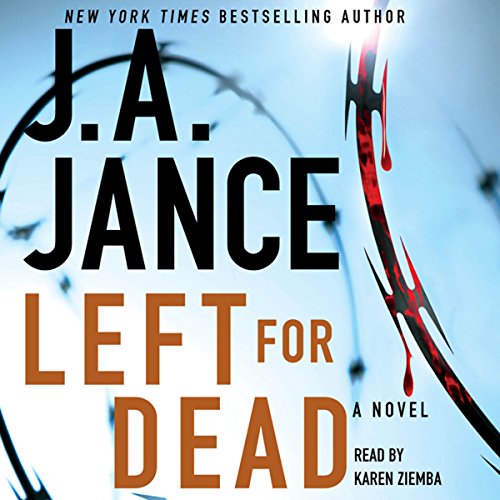 When Santa Cruz County deputy sheriff Jose Reyes, Ali’s classmate from the Arizona Police Academy, is gunned down and left to die, he is at first assumed to be an innocent victim of the drug wars escalating across the border. But the crime scene investigation shows there’s much more to it than that, and soon he and his pregnant wife, Teresa, both fall under suspicion of wrongdoing.

Ali owes Reyes a debt of gratitude for the help he gave her years earlier when she was dealing with a troubled friend. When she’s summoned to his bedside at Physicians Medical Center in Tucson, it’s impossible for her to turn away. And knowing Reyes as well as she does, Ali finds it hard to believe that he’s become mixed up in the drug trade, despite evidence to the contrary. Upon arriving at the hospital, Ali finds that her good friend, Sister Anselm, is there, too - working as a patient advocate on behalf of another seriously injured victim, an unidentified young woman presumed to be an illegal border crosser, who was raped and savagely beaten.

Ali becomes determined to seek justice in both cases and secure safety for both victims. Together with Sister Anselm and a conscientious officer who won’t let the case drop despite pressure from above, Ali digs for clues to find the true culprits. Fast-paced, tension-filled, and intriguingly complex, Left for Dead is J.A. Jance at her riveting best.

I absolutely loved this newest installment

What other book might you compare Left for Dead to and why?

Left For Dead is another great book by J.A. Jance, her seventh in the Ali Reynolds Mysteries. In all of J.A. Jance's books there is a strong sense of family, not just in the stories plot but in your reading experience. This sense of family is increased when you read another book in the series so my recommendation is to read others in the series as well.

Easy to listen too

When friends come to the help

Karen Ziemba does a great job narrating this series. Ali is off to help a friend who was in the police academy with her and also helps her friend Sister Anselma (sp?). Meanwhile her parents sell the cafe, and she is trying to decide on the new winners of her scholarship. It was nice to learn from this story what is going on with characters from previous stories in the series such as the last recipients of the scholarship and other fellow police academy students. The attempted murder of Jose the sheriff deputy, the murder of the postman and a rancher lead us on a tangled web to discover who did it. Over all it is a pleasant visit with friend in the series but I wish Ali would get back on the job at the Sheriff department it helped stabilize the story.

Karen Ziemba stresses me out

Would you consider the audio edition of Left for Dead to be better than the print version?

Karen reads this story so fast and aggressively she puts me on edge. I liked the story though

J. A. Jance's writing is top notch and the story was easy to follow (if not for the distraction of Karen's speed racing reading.

This book and the newest release Deadly Stakes were ruined for me by the pursed, very fast reading of Karen. It is like she is in a race with someone to read as fast as she can. One single, aggressive, on the edge of her seat tone of voice and speed reading ruined them for me and I sent the new release back. I tried three times to listen and found myself feeling stressed out and on the edge of my seat just because of her reading. Could not listen.

Let someone else read it

WHERE WAS THE EDITOR!!!?

Maybe as part of the series but this was the weakest yet. The entire rambling entrance of character after character along with overly complicated background stories left the plot movement flat. If you can't reveal the characters as you go along, bit by bit, maybe there are too many! Really hard to stick with...

What was most disappointing about J.A. Jance’s story?

no, she was fine as always but she wasn't given much to work will here...

Do you think Left for Dead needs a follow-up book? Why or why not?

Yes. I'm partial to audiobooks and I know many others are as well.

Would you recommend Left for Dead to your friends? Why or why not?

Yes, to continue the series. It had a nice level of surprise and suspense, although fairly predictable

Yes, when Rose found out her parents did not care what kind of life she led after she ran away.

What would have made Left for Dead better?

Writing to an audience of adults. I have read books for Young Adults that don't talk down like Jance does in this book. Quit adding things like, "We were all so tired we would have no problem going night night>" Really?

What was most disappointing about J.A. Jance’s story?

Would you be willing to try another one of Karen Ziemba’s performances?

No...her voice is irritating and one note. She should read children's books because that what I felt like when she read that book!

Anger...because I wasted a credit on it! I have tried to make it through the book 3 times, and quite frankly, I don't think I'm going to make it.

J.A. Will you please find Ali Reynolds a real job instead of having her flit around having the occasional roll in the hay with B and thinking she's just another person when really she is staring to come off as a snob!

Every time you think you know where the story is going, new info changes the direction of the plot. You will not know which killer(s) will be caught until near the end. But listen to the end because it is worth it.

Love the story and the reader. The story keep me in suspense all the way until the end.

Love J A Jance and her books but this reader was awful, emphasizing the wrong words, etc.

Many wonderful plait twists - kept me riveted. Her beat Allie yet! Even a funny reference to Moana B!