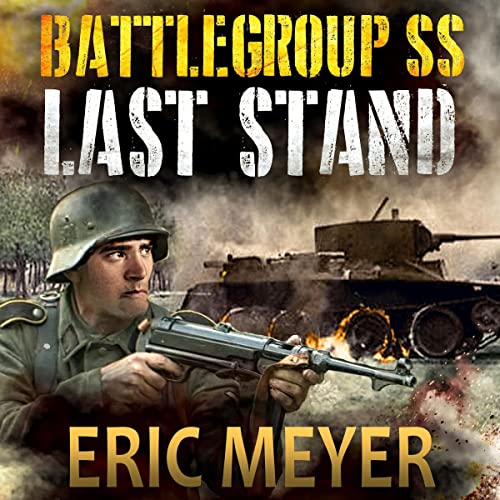 Last Stand: Battle Group SS is an account of an epic last stand at the end of WWII. The inhabitants of a small town attempt to fight the Russian hordes as they rampage toward them.

Leo Speer’s family are gone, killed in a bombing raid that obliterates everything he loves. Seeking revenge, he joins the German Army, where he quickly achieves the rank of Oberleutnant. His military career is short-lived. He is a doctor, not a butcher, and after continually refusing to follow orders, he’s assigned to a punishment battalion, a fate worse than death.

As the Eastern Front collapses, Leo is inducted into the SS and posted to take command of Elsberg, a small town on the eastern border. He commands a unit of 300 men, a mix of SS, Wehrmacht, young boys of the Hitler Youth, and old men of the Volksturm. They are faced with a Soviet Shock Army of 50,000 men, artillery, and armor.

They must hold out. The townspeople need time to treat and then evacuate the sick and wounded. He has to buy them that time by spending the only currency he has left: their lives. Speer knows it will mean the sacrifice of every soldier, Hitler Youth, and elderly Volksturm. Yet they prepare to fight what every man knows will be a battle to the death. One that will go down in history as a shining example of bravery and sacrifice, and perhaps mitigate some of the worst excesses of the Nazi regime.

A full-length novel by the best-selling author of the popular SEAL Team Bravo stories and the Heroes of Afghanistan, Raider, Echo Six, and Devil's Guard titles.

I like the story it’s a fun war story of impossible odds. The down side is the narrator. It’s not unlistenable, however his voice is weird and so deep. He holds syllables and makes words sound weird. He also mispronounces regular normal words. Hull is hall and so on. Like how does one pronounce “the bullet pinged on the tanks hull” as “the bullet pinged on the tanks hall”?