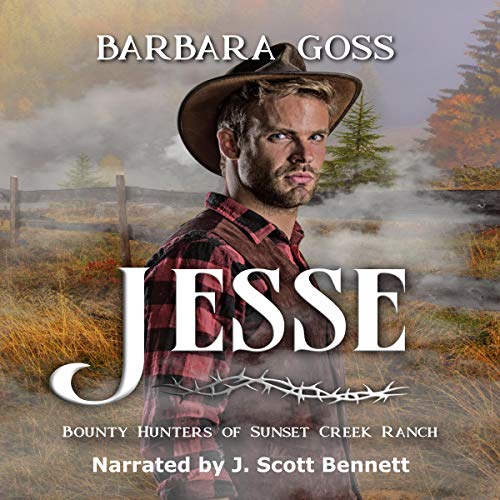 Fake friends are like shadows: They follow you in the sun but leave you in the dark.

Jesse, a scarred man after being a bounty hunter for 10 years, lives like a recluse. Suddenly two women enter his life, a raving beauty named Delia, and a bubbly woman, named Charlotte, who loves riding and shooting. One is out for his money and even his life, and the other is out for his heart. Jesse discovers one of his friends is behind a scheme to kill him and steal his land and money by using a woman. He needs to find out which of his friends and which woman is deceiving him. He marries one woman - but was she the right one?

Barbara Goss has written a clean sweet story. It had plenty of action and love.
J. Scott Bennett was the perfect narrator for this one. He has such smooth voice and I love to listen to him!

Fun! Fun! Fun! I love Barbara Goss and this book has all the things in it that I love about her writing. A good romance, some suspense, a strong woman and a lot of faith has this one coming in as one of my favorites! Jesse is a bounty hunter. Between jobs, he is home and kind of seeing Delia a local woman who works in the saloon. When his friend Seth asks him to be his best man for his mail order bride wedding, he is more than happy to oblige. And there he meets Charlie. Seth's new sister-in-law. These two hit it off. But now what will happen with Delia? Will Charlie stay? Will she be happy with a bounty hunter? Will either woman be happy his lack of faith in God? This book has it all. Delia is a spitfire, and this just gives a glimpse of what she is like! Charlie is quite the woman. Perfectly suited for Jesse, a little tomboyish and all woman. And Jesse is a wonderful man, trying not to cause any hurt feelings, figuring out where his life will take him. But what is the most exciting is the underlying suspense of his one. It's got a few unexpected twists and turns and kept me wondering how things were going to turn out! Another wonderful listen by Barbara.

Her narrators always suit her books perfectly. J Scott Bennett enhances this one with his calming voice. I always enjoy his narrations, as he knows his character and tunes into their personalities. He brings his romantic suspense to life and made my ears happy!

Was hard to get into

This book got better towards the end of the story, I thought. Had a hard time staying focused while listening to it.

I just love Barb Goss books, and this one did not disappoint. I love how she shares background information within the story more as conversation, than as fact. She builds the characters and their relationships with each other very well and I especially love how she shares her faith. It's clean and refreshing to read a book that isn't full of sex or language, which tends to make me cringe since most people over use it.
I listened to the audiobook version of the story and let me tell you...J. Scott Bennett is one of my favorite narrators! He does so many different genres of books, but my favorite are his western style. His voice is perfect. He portrays each person for me within the character that the author creates. He tells the story and keeps me entertained.
Barbara needs to keep writing and Scott needs to keep narrating.

Who should he choose?

Jesse is a bounty hunter. It’s all he knows how to do to earn a living. He took a break from his job to settle down on a piece of land and build a home. He wouldn’t mind getting married. Two women enter his life. They are very different from each other, but which one is the right one for him?

Always enjoy her stories, the characters seem real, and facing real problems. He has been a recluse and now two women vying for him. Which is true, can he be sure, he married one. Enjoyed. Given audio for my voluntary review

and the audio by Bennett.

You can never go wrong with a Barbara Goss book. I loved it. It was fun and I loved the characters and story. As always J. Scott Bennett is amazing in his narration of this book

I listened to the audiobook and really enjoyed this story. The narrator is one of my favorites and makes the story come to life. The characters were great and the story line was exciting. I couldn’t figure out there for a while what woman Jesse was going to pick. A good romance, with some suspense and a great faith thread going on too. Very interesting story. By the way I really liked Charlie and how she was strong but yet very soft inside. When things took a turn for the worse Charlie didn’t want to sit around and do nothing. But trouble follows so you will have to read or listen to the book to find out what happens. I recommend the audiobook because hearing it really enhanced the imagination.
I received a copy of this audiobook from the narrator but was not required to write a positive review. All opinions are my own.

I love Western stories like this one.
They take you back to the olden days where the men were brave and strong and protected their women.
J. Scott Bennett is the best Narrator ever!

It’s a sweet romance story of hope and home, family and friends, and finding one’s place.
Narrator did a great job!

I enjoyed listening to J Scott Bennett, a very narrator who brings it all together.

We have a mix of drama and romance. With a bit of suspense. Jesse is a bounty hunter, who wants to settle down . Trouble is there is two women, who Jesse must choose from.

I have now both read the book and listened to the audiobook and loved both versions.
The first thing that grabbed my attention was the cover. It is so different to all of the other covers coming out at the moment that I couldn't help but notice it. Besides that, it has a really nice looking young man looking straight at one with quite a serious look in his eyes.
But, that is not what I am supposed to review, or is it? Never mind...
I enjoyed this story so very much. It held my attention all the way through, has interesting characters and I loved Jesse's integrity. I also loved the way certain facts got uncovered and that all the situations got neatly tidied up before the end of the story.
This was really a very exciting and entertaining story and I am so glad to have read it and J. Scott Bennett has done has done his normal and very enjoyable narration which added to my enjoyment of it.
This is my voluntary and unbiased review having both read an Advance Reader Copy (ARC) of the book and listened to the audiobook.