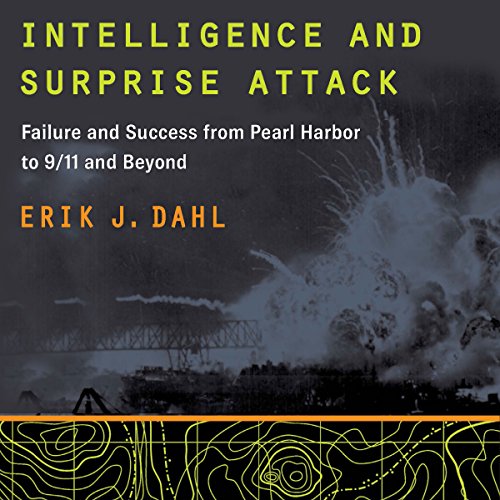 How can the United States avoid a future surprise attack on the scale of 9/11 or Pearl Harbor in an era when such devastating attacks can come not only from nation states but also from terrorist groups or cyber enemies?

Intelligence and Surprise Attack examines why surprise attacks often succeed even though, in most cases, warnings are available beforehand. Erik J. Dahl challenges the conventional wisdom about intelligence failure, which holds that attacks succeed because important warnings get lost amid noise or because intelligence officials lack the imagination and collaboration to connect the dots of available information. Comparing cases of intelligence failure with intelligence success, Dahl finds that the key to success is not more imagination or better analysis but better acquisition of precise, tactical-level intelligence combined with the presence of decision makers who are willing to listen to and act on the warnings they receive from their intelligence staff.

The book offers a new understanding of classic cases of conventional and terrorist attacks such as Pearl Harbor, the Battle of Midway, and the bombings of U.S. embassies in Kenya and Tanzania. The book also presents a comprehensive analysis of the intelligence picture before the 9/11 attacks, making use of new information available since the publication of the 9/11 Commission Report and challenging some of that report's findings.

The book is published by Georgetown University Press.

"A seminal work of original scholarship...should be a part of every community and academic library Security Studies & Intelligence collection." ( Midwest Book Review)
"Erik Dahl's Intelligence and Surprise Attack reflects the experience of a practitioner and the rigor of a scholar. It is a serious work that deserves attention in the world of ideas and the world of action." (Thomas G. Mahnken, U.S. Naval War College)

While in-depth, the audiobook does not bog down. The narrative keeps clipping along throughout the chapters. Well presented, also.

Correct pauses and emphasis on every chapter. Very interesting. I learned a lot of important things

Would you consider the audio edition of Intelligence and Surprise Attack to be better than the print version?

NO! The narrator sounded like my GPS was reading the book. No intonation or character.

I like the detail Dahl goes into on different intelligence successes which most authors/researchers fail to include.

A fascinating book, you may be better served to read the paper copy.

The Complexity of Intelligence and Applicatiom

Would you listen to Intelligence and Surprise Attack again? Why?

I would listen to Intelligence and Surprise Attack again if I wanted to reinforce the reasoning of how to cut through the fog of intelligence data, and direct proper response actions.

What other book might you compare Intelligence and Surprise Attack to and why?

None come to mind. This book is unique and stands on it's own.

What does John N. Gully bring to the story that you wouldn’t experience if you just read the book?

I feel I am hearing an intelligent conversation and description of the subject matter from John Gully. Kind of like, "This is what you need to know and why". It makes me want to listen to more. I feel I am getting the real deal. No bullshit, no fluff.

Good intelligence and proper actions will keep us safe.

Disclaimer. I was given a copy of this book in exchange for a fair review. Typically, I listen to thrillers. This book piqued my interest due to the current situation in the world today. Do we have good intelligence? Can we stop a surprise attack? Do our leaders know what they are doing? Are the massive surveillance systems we have in place actually keeping us safer? Is there bad intelligence, and wrong decisions are being made? Think weapons of mass destruction in Iraq. How about the mess in Libya? How about the nuclear issues with Iran? Is there good intelligence, but bad decisions and actions? Think Pearl Harbor. The base questions is do we have the proper intelligence, and are we properly acting on it? This book examines many facets of data collection, and how decisions and actions are taken. The major benefit of this book is to cut through the fog of information to provide a good assessment of intelligence how to properly act on this intelligence. I appreciate the author's ability to make sense of a very complex subject.

This book is excellent. Dahl presents the facts without much bias, opting for the logical reasons behind terrorist attacks instead of the "doomed to fail" approach. He is methodical in his presentation of the facts and his conclusions. I found the book quite interesting and would recommend it to friends and family, no matter their level of understanding of the topic.

I listened to the audio version and I found John N. Gully to be very clear and easy to understand. His speed as great.

**I received a copy of this book in exchange for an honest review.**

This was an extremely detailed timeline of surprise attacks dating from Pearl Harbor to the terrorist attacks of 9/11. It discusses the intelligence factor of these attacks, whether intelligence dropped the ball or was missed entirely or not acted on even though there may have been advanced warning.

While the audiobook was incredibly good, at times it was a little tedious. That doesn't take away from my five stars though because it was informative and did pose some very interesting facts. One of the earlier points made was concerning the intel surrounding Pearl Harbor. My question is if they did indeed know this was an imminent threat, what could have been done to prevent it aside from evacuation. I'm unsure whether or not we had the proper technology to have stopped it. I just don't know.

I also thought the timeline of events building up to 9/11 was very interesting. Overall, I thought this was a great audiobook and would definitely recommend it for anyone interested in this subject. Erik J. Dahl provides great examples and extensive research throughout the timeline regarding intel for all these events.

John N. Gully did a fantastic job narrating this audiobook. I liked the style he used, informative and reporter like which came across great. He spoke clearly and kept a steady pace. His work was flawless.

As both a non-American and someone with little to no knowledge or background of the Intelligence industry I found this book highly engaging and thoroughly enjoyable. It is well researched, while providing the right level of information and explanation for 'entry level' understanding.

Right from the start Dahl sets out a clear roadmap of what the book aims to achieve and how it is going to get there. He provides a thesis and then what each chapter will contain and how it pertains to that thesis. It straight away gives a good idea of where he is going and helps the reader start to put things together.

Dahl, while referencing reports and dozens of other studies on intelligence, works through a variety of Intelligence 'successes' and 'failures' (although as he states those terms are argued about and are sometimes hard to pin down) starting with Pearl Harbour and moving through things like Midway, the Korean War, embassy bombings, the NYC 'Day of Terror' and September 11. The looks as the event and the intelligence leading up to each event, as well as how those in charge dealt with said intelligence.

Many argue that it is lack of specific information that causes Intelligence failures. While this is often the case, Dahl argues (and shows through research) that it is also often a failure of willingness to act on the Intelligence (both strategic and specific) that causes failure. Intelligence itself is not enough for success, you need people to act on it.

I really enjoyed the mix of history and analysis.

Gully does well with the reading. He is clear, precise and easy to listen to. I enjoyed his work.

Where does Intelligence and Surprise Attack rank among all the audiobooks you’ve listened to so far?

Middle of the Road

Would you be willing to try another book from Erik J. Dahl? Why or why not?

Brings out all of the criticisms about President Bush to include Bush originated 9/11 but leaves the Bill Clinton pretty much alone. For example, no comment about the decision to have the FBI take KSM in Qatar instead of SEAL Team 6. When FBI contacted Qatar government, KSM was warned and escaped. He was the mastermind behind 9/11 attacks and there is question if 9/11 would have happened had he been captured. Of course FBI and government have pushed back against this, makes them look bad. As Hillary Clinton was the Sec of State at the time the book was written not hard to believe.

Good book putting forward solid concepts but the narrator sounds like a robot. Buy the paper copy. Don’t bother with this it’s painful