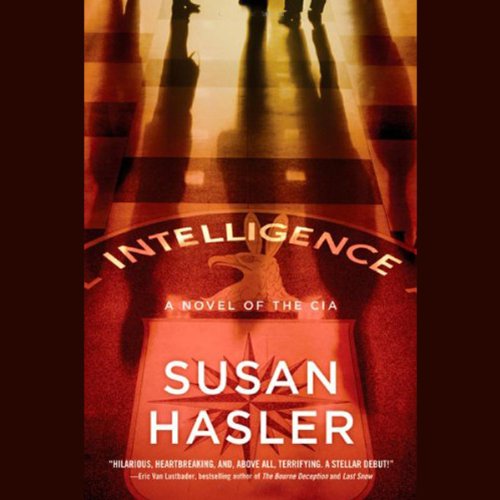 Intelligence: A Novel of the CIA

"A biting satire of the agency [Hasler] once called home….It’s a very funny book about a deeply unfunny slice of recent history. Read it and weep – but you’ll be laughing, too." ( The Washington Post)
"Often laugh-out-loud funny, Intelligence even manages to squeeze in a genuinely sweet romance. Susan Hasler does for the folks at the CIA what Joseph Wambaugh accomplishes with cops: she gives them human dimension. Sometimes sad, sometimes stupid, sometimes scary and at other times heroic, Hasler’s characters always seem achingly real." ( January magazine, Best Crime Fiction of 2010)
"There have been many books written about the CIA, some of them by ex-agents of the clandestine organization. But none of them have been anything like Susan Hasler’s Intelligence. For one thing, it’s refreshing to get a female point of view. For another, Hasler’s mordant wit makes reading this novel an unalloyed delight. Not since Catch-22 has a novel with such trenchantly mordant wit illuminated the inherent insanity of institutionalized war. Intelligence is funny, sad, and frightening. It’s a book to keep you up at night, one you won’t soon forget." (Eric Van Lustbader)

A team of intelligence agents tries to prevent an impending terrorist attack, but is thwarted by bureaucratic hurdles in this darkly humorous debut by former CIA agent Susan Hasler.

Maddie James and her colleagues are terrorism experts working in a crumbling intelligence agency. They are certain another big terrorist attack is coming, but in a post-9/11 election year, the administration is stressing its victories in the War on Terror, and few want to hear the team's warnings.

Maddie is given a team of five analysts to focus on the impending threat. The crew labors through bureaucratic obstacles, personal problems, and a blossoming romance between its senior members, Doc and Fran. They come heartbreakingly close to stopping the attack, but fail to predict a surprising twist in the terrorists’ plot.

In the wake of tragedy, the administration pins blame on Iran, despite a lack of evidence—so Maddie and her team try to investigate. With dark humor and a razor-sharp tone, they fight back against office politics, government cover-ups, and blackmail in order to set the record straight. A keenly crafted debut that could only be written by an ex-CIA agent, Intelligence will please fans of Wag the Dog and Primary Colors.

Not your typical spy novel....

Apparently the type of people who prefer typical spy novels want their spy heroes to be generally flawless, exceedingly clever and handsome, and to ultimately prevail in any given scenario (regardless of how unlikely the plot contortions this requires). This is not a typical spy novel, and frankly, I'm glad.

This is an extremely well-produced audiobook with a terrific and varied voice cast (so much better than having just one person do different voices for the various characters!), that combines the genres of spy novel and political satire almost seamlessly. The novel presents a compelling picture of the complexities and challenges of working inside one of our country's major intelligence agencies, including both the problems of bureaucracy and the difficulties of keeping at least one step ahead of terrorism, while also retaining a dark sense of humor about the whole business. And, if you have a somewhat dark sense of humor, this book is not just clever, it's laugh-out-loud funny.

It also presents a slightly fictionalized account from a CIA insider about the events leading up to, and immediately following, the terrorist attacks of 9/11/2001. The details in the book are consistent with what we've learned in the months and years following the U.S. invasion of Iraq, but are presented from a perspective that has not really been present in political discourse.

This is one of the best audiobooks I've ever heard - it's entertaining, funny, insightful and informative. Highly recommended!

This is a well paced novel told from many points of view. The characters are fun, interesting and well developed.The plot is "ripped from the headlines." Subtle jokes take you by surprise and make you laugh out loud.

Unlike the usual spy novel, this one paints a picture of the most secretive government agency as anything but glamorous - a place where the carpet squares are peeling, the server is sluggish, and workers covet the cubicle with a window.

It is about time someone wrote a book from the alchemist. point of view. Love it I could relate to their point of view. Haven't most of us worked with people like the characters potrayed in the book.

This is a humorous book, the various narrators were excellent,the story started slowly and in my view only became interesting about half way through the first period. I bought this book on the strength of earlier readers reviews and the book certainly lived up to their assessments . Well worth a read

An ex-employee takes an axe to her former bosses

Susan Hasler is a very bitter ex-CIA employee. She lays out her agenda in the foreword of this novel: she felt the Bush Administration ignored intelligence, concocted their own story, and turned the CIA into political apparatchiks in the wake of the 9/11 attacks in order to engineer an unnecessary war with Iraq.

Whether you agree with her assessment or not, Intelligence is a sharp, sometimes funny book but one in which the author doesn't even try to be subtle about her axe-grinding. As a veteran CIA agent, she writes about the "fictional" CIA and intelligence community with enough verisimilitude that those who are not actually familiar with how the military-intelligence complex works will be horrified and hope that she's exaggerating things, while those of us who are will groan and nod knowingly. Okay, Hasler does exaggerate a few things, but honest, folks, this is pretty much what life as a fed is like.

The plot is straightforward: terrorists plan and execute another attack, this time at a baseball stadium. Their plan is clever and fairly low-tech, something any organized, intelligent group could engineer with a little practice and preparation and not a lot of money or special equipment. In the wake of a second terrorist attack inflicting mass casualties on American soil, the Administration (not named in the book) proceeds to pin the blame on Iran and begins dismissing or destroying any evidence that suggests otherwise.

The protagonists of the novel are a group of intelligence analysts who almost, but not quite, figured out what the terrorists were planning before they did it, and are now desperately trying to get the truth out before the country goes to war with Iran.

Although Hasler's purpose in writing this book was explicitly to exercise her own demons over 9/11, she actually put out a fairly tense political thriller. In the days leading up to the attack, we wait to see whether or not it will actually go off, and after it does, we see the main characters battling their bosses, the intelligence agency, and Congress, all of whom are against them.

The writing is only average, as is the plot, but the characters were quite human and exactly the sort of people you'd meet working career fedgov jobs. You want to believe CIA analysts are these super-sharp geniuses with supercomputers at their command, like you see on TV, but really they're just normal folks with kids and mortgages and tons of baggage, and going in to work to stop terrorists tends to become just like any other office job... except when things go wrong.

Regardless of your political views, you'll probably find much of the book disconcerting, and you may want to project your politics onto the author's message in terms of who's to blame, but the fact is, these games play out this way regardless of which party is in power.

The multi-cast audio performance worked very well for this book, which shifts POV frequently. Each character had a distinctive voice and personality which helped a lot in keeping straight who was talking.

Too close to the truth

This is an excellent story. It smacks of the reality of what probably happened during and just after 9/11. The multiple narrators was a nice touch.
Except for prolific profanity it would have been perfect. This is not a story that the whole family will want to listen to.

this is only my second audio book and it'sso great to listen to. the cast of narrators are so good making this brilliant story impossible to stop listening too. Its serious - oh so serious. yet it has parts that have had me laughing out aloud gripping my stomach ! . This is the best story i've ever listened too. I'de recomend it to everyone

Written by one of the key figures in the CIA prior to 9/11. Susan Hasler quit the CIA after 9/11. She'd tried unsuccessfully to get the government to act on information her agency had discovered about the plot.

This is a suspense novel. Plain and simple; read this with a mind to how the scenario would have played out prior 9/11 and it will send shivers down your spine. Buracracy at its worst.

One of the best audios I've heard yet

With Susan's many years with the CIA she gave us a look of what really happens with in those walls. Excellent story that can be true. Witty....insightful.....edge of your seat narrations by a host of narrators. I truthfully hated to have the story end.

I enjoyed this book immensely and couldn't wait to get back to it.
The "acting" style of narration, where each speaker was done by a different voice truly enhanced the presentation.

There are many things this book is not. It is not an action/thriller tale. It was not written by a high-level player on the national-security scene. And, in the dubious interest of so-called "fairness", the author has not checked her opinions at her word processor.

This book is a hamster-eye view of those who run on the wheel deep in the CIA. The characters are regular people with regular foibles, even the bosses. Problems ensue when the bosses are asked to tailor the analysts' product to the policymakers' chosen party-line. Bosses being bosses, they cave in to the pressure - not that they really have a choice. Hasler presents a very believable view of how this kind of pressure can actually help the terrorists: by diverting resources better used in fighting them.

Another reviewer commented on the author's politics. The issue is bigger than mere "politics". It's about the safety of the American people at home. In a very entertaining way, Susan Hasler has shown the peril of taking our eyes off that prize.