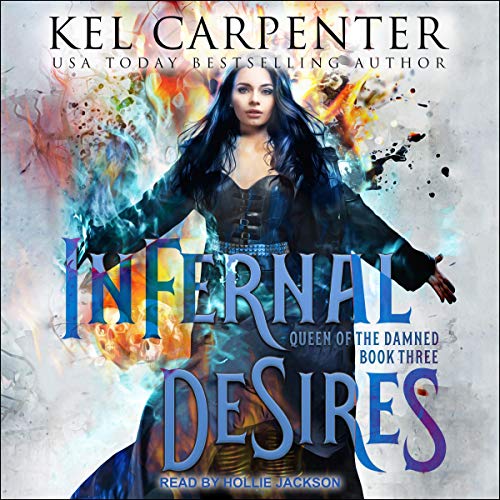 They say there's no rest for the wicked, and New Orleans never knew how true that was until I came to town.

Nobody told me that when I entered the transition, the very gifts of my demonic lineage would be used against me. Nobody warned me that the flames of hell would burn from within. Or that I'd be driven to lust and madness, my chaotic magic becoming more wild and unruly than ever before.

The only way to save myself - and the world - was to give the beast what she wanted: control.

As if transitioning wasn't enough, my presence was now known, and my enemies were mounting. While the beast was intent on claiming our Four Horsemen, there were things to be done. People to find. Demons to kill.

And when they make a deal with the devil - let's just say that neither world will ever be the same again.

Long live the queen. If I can survive becoming immortal, that is.

I waited til I'd listened to all four books..... and, unless you like really funky sex scenes spelled out in great detail … you might want to skip this book and just go to book 4, if you've already listened to 1 and 2 in the series. IThis book mostly consists of the female lead moaning for sex and a lot of in depth descriptions of very funky sex scenes -- multiple partners at a time, multiple orifices at a time -- and the consequences thereof in terms of putting the other characters in danger and in need of rescue -- I have to say, I loved the first two books, if the author had continued on with the same sassy, woman in control, "prove you are worth my affection" attitude, and continued requiring the men to learn to treat her as an adult capable of rational thought and reasoning, and then finished off book 4 with her acceptance of them and the sexual activities, I'd have five starred all four books all around even with the funky submissive sex … luckily, book four completed the series, as I don't think I could have waded through any more "I love pain" comments, whining for sex, biting til the partner bleeds, etc etc to get to the (actually very satisfactory) conclusion of the book series in book 4.

The books are way too short!! Fantastic book and performance. I cannot wait to listen to book 4.