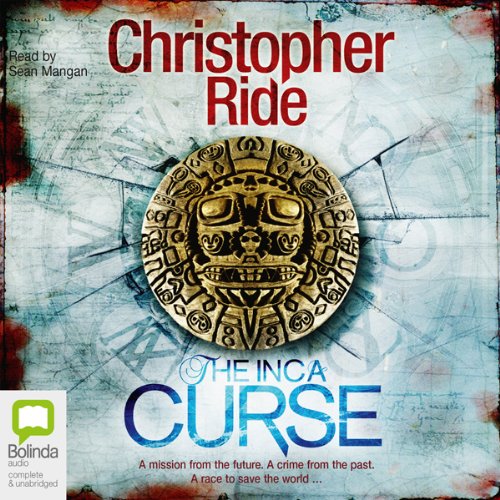 Wilson Dowling is the Overseer, a man transported from the year 2081 to carry out a series of vital missions encoded in the Dead Sea Scrolls. His latest assignment had seemed simple enough - to lead the American explorer Hiram Bingham to Machu Picchu, the Lost City of the Incas. However, he discovers that history has gone dramatically off course. The Golden Cube of the Sun God - safely hidden at Machu Picchu for hundreds of years - has been stolen. Whoever possesses it could potentially unleash a dangerous power that is beyond their comprehension - and their control. Not only that, but without it Wilson can never gain transport home.

Pursued by a tribe of fierce female warriors, the ancient guardians of the Lost City, Wilson races to find the deadly treasure before he is stranded forever in the past. And before the entire world is thrown into chaos.

Just OK story, annoying if you know the Andes!

I should say, "Just OK story, annoying if you know much about the Incas, Quechua, or Spanish", but the character limit on titles doesn't let me.

This is an OK story, full of implausibles, but, heck, one doesn't look to time travel stories for plausibility. It goes on a bit too long, and is kinda predictable, but it did keep my interest enough to finish. Sure, the baddie was over the top and ridiculous, the characters shallow and stereotyped, the history and culture warped, and the deus ex machina essential… but listenable, like a fast-food meal.

OK, as a Quechua speaker, I am familiar with misuses (and some here are fairly comical)of the language by authors, and bad pronunciation by narrators. This happens a lot, though its also true that many conscientious authors and readers have made the effort to contact me or someone else to do things properly.

But, as a Spanish speaker as well, I was shocked at the level of mispronunciation here. It's quite annoying when, for example, frequently-used words like "plaza" are mispronounced ("plot-za"). There were many, many examples, but plot-za sticks out because it was used hundreds of times in the book. Please, narrators, make an effort!

I loved Chris Rides first two novels...and although this one had the same characters, it just wasn't as good. I think the biggest thing missing is humor. Unlike the first two books, Wilson doesn't seem to enjoy anything in life in this one. It is a dark, hopeless quest that he finds no light in. I wonder if Ride had the feeling of "I HAVE to write another book about Wilson" and it translates into the book with the main character feeling "I HAVE to time travel again to save the world"? This novel is also missing the geographical range of the other two, meaning it all takes place in one small spot. You would also need to at least read the first novel to understand what all is going on. There are quick references to the FASCINATING time travel theories and mechanisms that are all laid out in the first book, The Schumann Frequency. Sadly, in this one, nothing new is discovered about the mission, nor any skirmishes with fellow time travelers, just half naked giant amazon women. The research is excellent and its fun to follow along on Wikipedia. I don't know if I would recommend this to someone because its fairly lengthy to end up with Wilson having nothing substantial. The FIRST BOOK works because you are learning about the characters and time travel and the mission. The SECOND BOOK works because of the unanswered questions and unexpected severed relationships from the first book. This book doesn't contribute anything substantial to the characters in my opinion.

Huge Matthew Reilly fan, and after finishing all of his books was craving another similar to that type of story and adventure creativity.
I drive for long hours daily and must say loved every second of this! Highly recommend it to everyone!

The Inca Curse by Christopher Ride and Narrated by Sean Mangan is the most Fantastic book I have ever had. The Narrator has the most beautiful voice and the way he says all the place names is so amazing, he really makes you become so involved in the story. It is seeped with true History as well. I am definitely reading any books by this more than fantastic Author.I enjoyed having it on audio only problem is I wish my journeys to work was longer!

Enjoyed this second book immensely and Sean Mangan is one of my favorite narrators who always delivers a quality performance. Please adapt more of Christopher Rides books for Audible.

great read I couldn't put it down. Can't wait to read the the next one.

About 30 minutes in and you are “off to the races”

Ancient Incas, time travelling and a brilliant multi dimensional story made this one impossible to stop listening to, plenty of laughs as well as totally cringe worthy moments too

I'm no literary snob - yup, I like well written literary fiction but I'm also keen on a good page turner with an energetic plot. However, I just couldnt get past this book's abundance of dated tropes and clichés. The ruggedly handsome hero, the impossible drama, the physical prowess, the stunningly beautiful and athletic amazonian woman warrior with no clothes and an inexplicable soft spot for the hero - these were all a bit of a cringe but when it got to describing one woman as having "a magnificent blonde fringe" I fell about laughing, gave up on it and returned the book.

Escapism in the form of time travel and good vs evil. Enjoyable except for stupid "every man's fantasy" sex scenes with Amazonians. Cheapened the book and writer.

I loved this book from font to back intriguing and very descriptive I could visualise it for me it was an accidental pick but so glad I did. Great performance between a time traveller and ancient times hidden city and much more. Highly recommended listening.