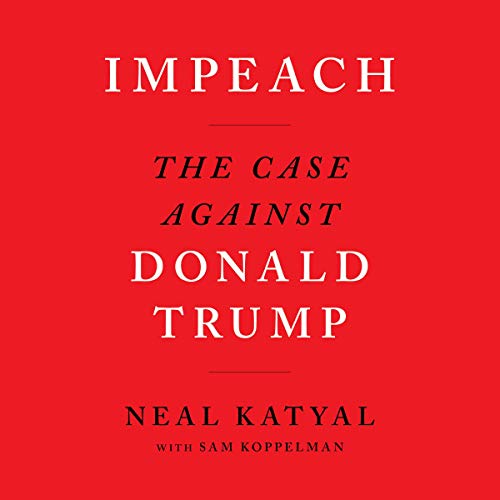 Why President Trump has left us with no choice but to remove him from office, as explained by celebrated Supreme Court lawyer and former Acting Solicitor General Neal Katyal.

No one is above the law. This belief is as American as freedom of speech and turkey on Thanksgiving - held sacred by Democrats and Republicans alike. But as celebrated Supreme Court lawyer and former Acting Solicitor General Neal Katyal argues in Impeach, if President Trump is not held accountable for repeatedly asking foreign powers to interfere in the 2020 presidential election, this could very well mark the end of our democracy. To quote President George Washington's Farewell Address: "Foreign influence is one of the most baneful foes of republican government." Impeachment should always be our last resort, explains Katyal, but our founders, our principles, and our Constitution leave us with no choice but to impeach President Trump - before it's too late.

Neal Katyal makes a very complex process easily understood and why impeachment is so rarely used...in the Trump case there clearly was no other choice.

I now have a complete understanding of the history of impeachment and why Donald J Trump should definitely be impeached.

I really wish Neal Katyal could present the case for impeachment to the Senate. For certain, President Trump would definitely be removed from office. Thank you Neal and Sam for this easy to understand great book. I feel like I’ve just heard a case presented to the Supreme Court judges.

This book captures the Democratic hypocrisy and blind spot to the very ideals they smugly and cynically cite.

As the author states, “If Democrats impeach a duly elected Republican for purely partisan reasons today then republicans can push to do the same thing to a Democrat tomorrow.” This is so true, and as the Democrats have made clear from BEFORE day one, the ONLY concern of the Democratic representatives has been to overturn the will of the people in electing President Trump at every moment. I am genuinely and deeply concerned for President Trump’s comments and behavior, but I’m far more concerned and disturbed with the desire and willingness of the Democratic leadership to sell out America’s values for their selfish, cynical, transparent, all consuming hunger for power. They have shown their proclivity and willingness to renegotiate and redefine all words and labels at the altar of their greed and lust for power. My main protest to this book is its dishonesty. It doesn’t hold Democrats, nor their words, nor their behavior accountable to this standard.

This book is a must read for anyone interested in understanding the importance of this very serious protection built into the .Constitution. The author explains the history and rational of the rounding fathers and how this relates to the situation we find ourselves in today.
I highly recommend this book and wish to thank the author for explaining the legal concepts in non-lawyer language.

Great book full of facts about the impeachment.

I highly recommend this book, it goes through the facts in the impeachment cases and these laws and history that allow impeachment.

Most memorable, "The Impeachment Clause directs attention to'particular' misdeeds, not the ambient badness of a presidency."

Impeaching a president is complicated, confusing, and extremely rare.

Impeachment breaks down both the big and small details of the process and it's legal and constitutional basis in a straight forward and easy to understand way.

A must read for all who want to understand what Impeachment is and why it's painfully necessary in modern American cira 2019.

Neal Katyal has written a very special book here. It is painful to read because no one in their right mind wants the country to go down the path of impeachment. But in this case we just have just no alternative.

This little book, written by an attorney, former prosecutor, and expert in constitutional law states the case directly, unbiasedly, and powerfully. I hated reading it. Tore my guts out. But it is the clearest thing I’ve read yet that lays out the case, including underlying documents, that makes it clear. This is not a book for EVER Trumpers. It IS a book for people trying to understand what has brought about this current constitutional crisis and the only constitutional way to address it.

Neal Katyal demonstrates why he is one of the finest litigators in the country and why he is considered among the most successful advocates when it comes to arguing cases before the Supreme Court. Impeachment: The Case Against Donald Trump is reasoned, balanced, and forceful. It is a must read for anyone interested in the facts of the case against Donald Trump and why we simply cannot wait for November 2020: perhaps the most important point of all.

This is the info you need right now

Just finished listening to this wonderful book. It lays out the facts concerning the current impeachment inquiry, as well as history of the impeachment process as set out by the founders in the Constitution. Well written and resoundingly patriotic. Five stars!