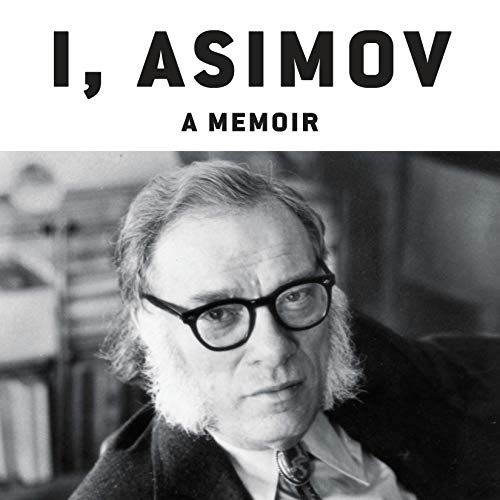 Arguably the greatest science fiction writer who ever lived, Isaac Asimov also possessed one of the most brilliant and original minds of our time. His accessible style and far-reaching interests in subjects ranging from science to humor to history earned him the nickname "the Great Explainer". I. Asimov is his personal story - vivid, open, and honest - as only Asimov himself could tell it.

Here is the story of the paradoxical genius who wrote of travel to the stars yet refused to fly in airplanes; who imagined alien universes and vast galactic civilizations while staying home to write; who compulsively authored more than 470 books yet still found the time to share his ideas with some of the great minds of our century. Here are his wide-ranging thoughts and sharp-eyed observations on everything from religion to politics, love and divorce, friendship and Hollywood, fame and mortality. Here, too, is a riveting behind-the-scenes look at the varied personalities - Campbell, Ellison, Heinlein, Clarke, del Rey, Silverberg, and others - who along with Asimov helped shape science fiction.

As unique and irrepressible as the man himself, I. Asimov is the candid memoir of an incomparable talent who entertained readers and listeners for nearly half a century and whose work will surely endure into the future he so vividly envisioned.

This great book is now an unabridged release!

The reader of this book, Jon Lindstrom, did a fine job. But I have read the print version of this book several times and I always “heard” it as I was reading, in Asimov’s voice. So, when I heard someone else reading it...without the New York area accent...without the irony and delicious sarcasm that Asimov himself had when he read his own books or talked about himself, I was disappointed. Lindstrom has a serious, gravely voice. Perfect for a contemporary mystery, for example, but wrong for this book...at least in my mind.

Some of the reviews of this book complain that Asimov was too boastful, that he was too self-centered, and conceited. He would, I believe, agree completely. On the other hand, he accepted himself as he was and with perhaps a smidgeon of self-deprecating humor, was happy with who he was. He was good...and he knew it.

Asimov fans who loved the earlier autobiographies or the autobiographical interludes in books like “The Early Asimov” will love this one as well.

As prolific as he is many of us readers think of Asimov as transcendent in many ways. Somehow superhuman. Turns out he sees himself that way as well. There are so many things to like about this guy and so many things about him that I find distasteful. I can't decide if I would have liked to have known him or not. The thing is we are all that way. That is what makes us human. What I admire most about Isaac Asimov after listening to his memoir is that he knew all of this. As much as he thought of himself, and he tells us time and time again how much he admired himself, he knew he had faults and didn't try to hide that fact. I don't agree with a lot of his opinions but I respect that they were his opinions. I freely admit to not having read much more than his science fiction, which is a small part of his contribution to literature, but I'm grateful for his stories as I have enjoyed them immensely.

As for this book,..It's as well written and fun to listen to as his Sci-Fi and the reader did a fantastic job.

Memoir of a self-absorbed narcissist.

The memoir is interesting because of the information he provides about other writers and history.

Had I known Isaac Asimov was such a self-absorbed, self-centered, narcissistic egotist I would have never read any of his short stories or books. Actually, I wish I could get my money back.

The pathetic part is that he's proud of being "A legend in his own mind" who continuously thinks he's smarter and better than everyone else.

This memoir makes it clear and obvious that he's little more than an adult child with delusions of grandeur.

This memoir was not even honest about his death which was from HIV related kidney failure.

He'll Always be Remembered in my Heart

When I first started hearing this I thought:boy what an arrogant egoist. But the more I listened, the more I realized that it was said by a sensitive humourous soul. As the book went on I started to grow fond of him and by the end I was truly in love. The reader was so good that I had to keep reminding myself that it wasn't Asimov speaking. The book really touched me
Thank you Audible for having it in your library.