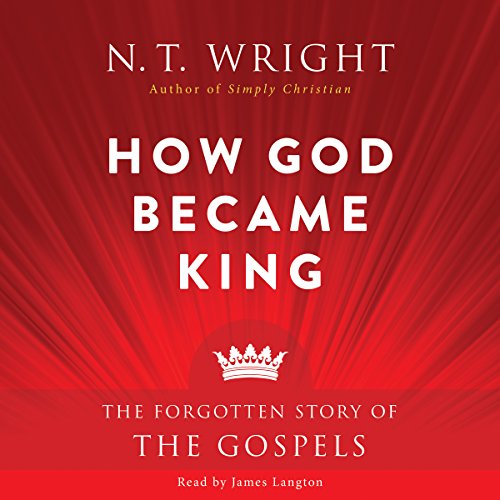 New Testament scholar N. T. Wright reveals how we have been misreading the Gospels for centuries, powerfully restoring the lost central story of the scripture: that the coronation of God through the acts of Jesus was the climax of human history. Wright fills the gaps that centuries of misdirection have opened up in our collective spiritual story, tracing a narrative from Eden to Jesus to today. Wright's powerful rereading of the Gospels helps us realign the focus of our spiritual beliefs, which have for too long been focused on the afterlife. Instead, the forgotten story of the Gospels reveals why we should understand that our real charge is to sustain and cooperate with God's kingdom here and now.

Echoing the triumphs of Simply Christian and The Meaning of Jesus, Wright's How God Became King is required reading for any Christians searching to understand their mission in the world today.

I originally bought How God Became King when it was on sale for Kindle nearly three years ago. At the time I was at the end of a long NT Wright kick and picked it up. Last week it was released as an audiobook and I decided to re-purchase it in that format (not whisper synced unfortunately).

Part of what drove me to pick it up again is the recent public discussions of the Benedict Option and several private discussions about poorly catechized Christians. I vaguely knew that How God Became King was at least in part about how Wright viewed the creeds (even though I wasn’t sure what that meant.)

The problem Wright is addressing in How God Became King is that we usually tell the story of Jesus, especially when we use the creeds, by saying that Jesus was born (became incarnated) and then died and was raised again. The incarnation becomes important only for the ability for Jesus to die and be raised again.

Wright’s concern is that we have used the creeds to interpret the gospels, or just as problematically, used the creeds as our sole syllabus for determining what should be taught about Jesus and the Christian faith. Section one of the book is mostly introduction to the problem (and if you have read much Wright, a lot of repetition.)

Section two uses a central metaphor of four speakers. In order to hear properly the speakers must be in balance and tuned. Wright thinks that two speakers are turned up way too loud, one is turned two low and one is in the attic and completely unplugged. The too quiet speaker is the story of Jesus as the climax of the story of Israel. Jesus apart from the story of Israel turns the Old Testament into a series of character studies, laws and poetry. The Old Testament then become interesting but less important because of the cultural distance and doesn’t really matter to a New Testament church.

The second speaker, which is too loud, is story of God coming back to his people as he always promised. This speaker focuses on God’s promises and prophecy, but because the first speaker is too low, does it in a way that removes the historical people of Israel and helps Christians of other times and places think that all of those Old Testament promises were actually primarily for the modern Christian and not for a historical Hebrew audience.

As a note, the main theme of the book is that Jesus came to begin his reign as king of this earth. So as Wright explaining Jesus as King throughout the book, he keeps saying that while Jesus’ death and resurrection is also for our sins as individuals, it is not only for our sin. More importantly for Wright, Jesus’ death and resurrection is the way that Jesus becomes king. But King of a kingdom of a different sort than what anyone could have predicted. What is important about this, is that Wright is not, as more than several have charged, dismissing the reality of sin. Wright emphasizes the reality of sin and the brokenness of the world as a result of that sin not only in this book but throughout his writing. However, because a whole stream of Christianity has emphasized Jesus dying for our personal sins as the entirety of Christ’s work, any detraction from that, can be seen as denying, or at least minimizing the role of sin in the world. Wright is not attempting to deny sin, but to refocus our understanding of Jesus as King and Messiah.

The fourth speaker, which in Wright’s metaphor is not just too low, but unplugged and stored away in an attic somewhere, is the story of Jesus’ kingdom clashing with the kingdom of this world, in this case the kingdom of Caesar.

This fourth speaker I think is a good illustration of how Wright uses hyperbole, sometime to the detriment of his message. There is a whole moment right now of ‘Jesus is Lord means Caesar is not’. And this is just one example. In part because I have read so much NT Wright, I think his propensity to understate where the historic themes that he believes that he is re-discovering have been all along, is grating. I really do value Wright’s ability to bring many of these themes to a popular, or at least to a broad academic and clergy audience. These are necessary corrections, but in his overemphasis of the correction, there are many that dismiss him because he writes like he is talking about something that no one else has been talking about for generations.

And as I almost always say, NT Wright is repetitive. If you have read any of his previous works, then you will hear repetition here. That is a necessary part of his method. That may be irritating for the frequent Wright reader, but I think it is part of what is necessary. It may seem odd that I think he needs to be repetitive, but I think that he needs to be less hyperbolic, because both are part of how he believes that we need to be changing the paradigms of how we read scripture. But it is a matter of style that I am disagreeing with, not content.

My last note is that the final chapter is about how we should understand the Creeds and the message of the four books of the gospel. Wright thinks we need both creeds and gospel. The creeds helps build some boundaries on how we read the gospel (reading the gospels so that Jesus is not divine or God or the father is not the creator is not creedal and therefore not an accurate reading.) But Wright also believes that it is the gospels not the creeds that should be the starting point for how we teach and catechize those that are new to the Christian life. The gospels, not the creeds are the dominant and primary voice of what it means to be a Christian. And I think that is also useful for me.

As I have been thinking about what it means to be a Christian when orthodox Christianity is no longer culturally dominant, I think catechesis becomes very important. We can no longer assume basic understanding of scripture or knowledge of the story of Christ. My bias was to start with the creed. I still think that the creeds are important and necessary. But Wright has made his case for me that it is the four books of the gospels that need to be primary.

(originally posted on my blog: Bookwi.se)

Massively Helpful Book On The Kingdom Of God

Dr. N. T. Wright, is recognized by church leaders world-wide as one of the leading New Testament scholars. In, "How Good New King" Wright demonstrates how much of the Church as misread and misapplied the Gospels by reducing them to only being a backdrop for a Pauline view of salvation. My Th.M thesis was on the Kingdom of God, so needless to say, I have read volumes of books on this theme, bit Dr. Wright's is by far the most thorough work I have come across. And amazingly what Wright had done is to take an academic, scholarly subject and effectively make it accessible to non-academic in a way that is exciting and profitable. Jesus' message was the Kingdom, our mirage should be the same as Jesus'. If you desire to understand the Kingdom of Good, and to know how you should live in the light of it, "How Good Became King"is the book you are looking for.

A Road Map For A Life Of Faith

I appreciate this book that explores the gospels and their meaning in light of how a first century person would have understood them. Some things have become so clear and now better understood that it is giving fresh wind to my sails of faith!

NT Wright is a must read. This book is a great way to enter into his exploration of the gospels and their intended purpose. Wright examines the theme of the Kingship of God and its centrality in Matthew, Mark, Luke and John. Great book if you want to see these books through 1st century eyes.

interesting and thoughtful, not coherent

His central point was clear but his evidence wasnt stated in a concise manner, and I often thought that he moved on to either his next point or next piece of evidence before flushing out the one he was on. This resulted in a scattered listening experience, and it was sometimes hard to follow. It would likely have been easier to understand if I'd read the book. As a result of these flaws, Im not sure I was able to face his arguments squarley enough to come to a conclusion, one way or the other, about their validity. So, while it makes sense that Jesus came to rescue and reclaim the whole world through becoming king, I dont know that I agree with the assertions regarding credalism, or Protestantism (about which his arguments were presumptuous, although I have no doubt that he has flushed his assertions about protestantism out in other books) and I got the idea (possibly incorrectly) that he was saying that Jesus' kingship would result in the gradual renewl of this world, but he never integrated that into, or explained how, that fit into the remaking of the world as described in Revelations. in all, thought provoking but it left me with a sense of incompleteness.

Great deep dive into the Gospels

Another great deep yet approachable book from NT Wright. I learned a lot about the Gospels and the context in which they were written. I bought this book because I noticed a lot of Christian sermons and books talk about "the gospel" without much reference to the four Gospel accounts. This book addresses that issue head on using a very helpful analogy of four speakers (in typical Wright fashion). The book might be a little hard to understand for someone new to the Bible because he assumes you are familiar with a lot of things.

You need a Christian background , but if you have one you will discover a Jesus more important and a more satisfying nurturing Christianity . The narration is wonderful!!!

This brings some things to light you wouldn't have considered. I really like the style of this author. I've enjoyed and learned a lot from several of his works. Although he is a renound scholar, he doesn't come from a arrogant condescending perspective like some others for example Diarmaid MacCulloch.

N.T. Wright's has challenged and inspired me to continue on my journey in understanding who Jesus is and what was His life on earth all about.

very up building and encouraging

helped me understand how to read the Gospels more clearly and worship Jesus as king of his rightfully earned kingdom.