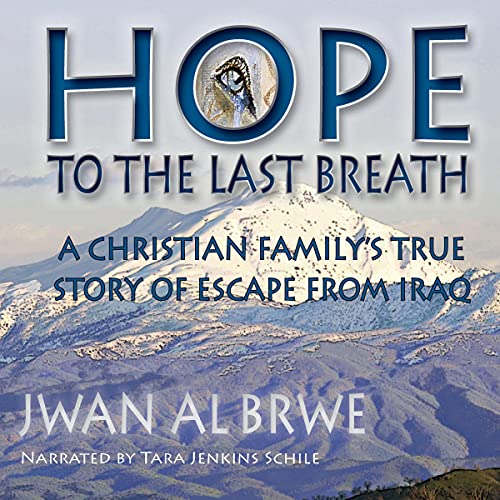 Courage, high adventure, and a deep faith in God’s goodness are all part of this story of an Iraqi Christian family’s harrowing escape from death and destruction in their native country.

Victimized by a conflict they didn’t create, they risk everything for the possibility of peace and freedom. On foot with little food and water, they fight their way through the rugged mountains separating Northern Iraq from Turkey before being abandoned with thousands of others on the Turkish border. Never giving up, they use every means possible, including human traffickers, in an attempt to satisfy their thirst for freedom. A tribute to the enduring strength of the human spirit. In addition, Hope to the Last Breath offers an inside look at Iraqi family life rarely seen in the Western world.

An introduction in the author’s own words: we didn’t choose or cause the troubles that came to Northern Iraq. Our family wasn’t involved in politics. We had no part in the dispute over autonomy that bred such animosity between the regime in Baghdad and the ethnic group that dominated our region. As is so often the case for refugees, we were caught up in a conflict between others. Our life had been simple and beautiful. But one morning that peaceful existence came to an end, and we were forced along with many others to take flight in order to save our lives.

In 1991, the war between Iraq and Iran had been over for several years but we continued to suffer the consequences. We had not known peace for almost a decade and when the fighting ended the people were celebrating in the streets. But just when we believed that peace and tranquility were back, the conflict re-erupted, this time within Iraq as the central government sought to reestablish its control over the North.

We live in a world where the plight of refugees is seen on a daily basis. But so often all we know is the end of the story. We see the refugees arrive at their destination, desperate for help, all their resources gone, hoping - even begging - for a chance to find freedom and peace. What we don’t see as clearly is what went before - the conditions which drove them to take such chances with their lives. Are they escaping from oppression, the threat of death, grinding poverty, or all these things? Every story is different. Sometimes the stories are told in a short time span, other times they unfold over many years and require many attempts before a land promising freedom can be reached. Some refugees die trying to escape the intolerable, while others are so frightened by the bitterness of being strangers in a new land that they decide to stay put despite all they are suffering.

My family’s story has many chapters. We tried again and again to escape the brutality of our home country and secure for ourselves a life of peace and contentment. Our story is one of endurance, of physical bravery, of danger and death, of great suffering, and survival. Sometimes we had to be reckless with our health and safety. I hope none of you will ever face the trials we did, but if such times ever come to you, I want you to know that in the end it was all worth it. May God always be with you. - Jwan Al Brwe.

Jwan Al Brwe was born into a large Chaldean Christian family in Duhok, Northern Iraq. The Chaldeans are an ancient people of Iraq, dating back to Nebuchadnezzar and the Babylonian Empire in Old Testament times. To this day, their native language is Aramaic, the language spoken by Christ, who still gives hope to her and her family.

Hope to the Last Breathに寄せられたリスナーの声