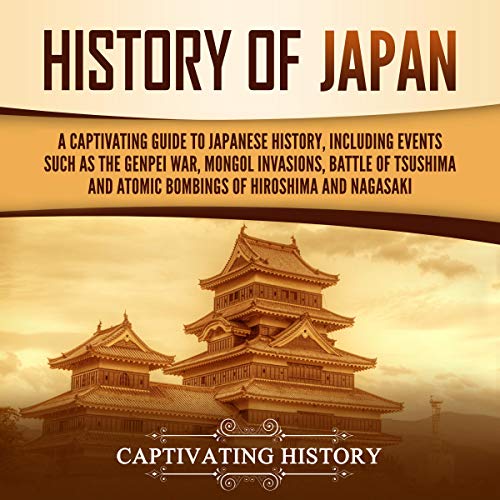 If you want to discover the captivating history of Japan, then pay attention...

Japan is one of the most adaptable countries in the world. It is capable of very rapid change, even after crises that would halt the progress of other nations. When the shogunates collapsed in the 17th century, the feudal system disintegrated. Within a year’s time, though, railroads replaced ox carts. During World War I, a first-rate economy sprung up on deserted farmlands. During World War II, the modest islands of Japan burgeoned into an empire with one of the most powerful navies in the world. After the devastation of that world war, Japan emerged as one of the most modern countries in the world. The Japanese have survived frequent earthquakes and tsunamis and rebuilt their cities using enviable technologies.

The Japanese progressed throughout the eras because of the emperor, but they also progressed despite him. These are people who never let go of their sacred history, and their story is told and retold in art, film, literature, and even graphic novels across the entire world. Terms such as shoguns, samurai, haiku, anime, and manga are familiar to many in the Western world today. Westerners also learn flower arranging, martial arts, meditation, and enjoy a variety of visual and digital art forms because of the unique culture of Japan.

In History of Japan: A Captivating Guide to Japanese History, Including Events Such as the Genpei War, Mongol Invasions, Battle of Tsushima, and Atomic Bombings of Hiroshima and Nagasaki, you will discover topics such as:

So if you want to learn more about the history of Japan, scroll up and click the "add to cart" button!

Great work about the subject!!!!. Of the great value for me were the extracts of Japanese poetry.

A comprehensive overall coverage, however, a bit light on coverage of Japan's involvement in the world wars, especially on it's an aggression on China during WWII.

A good introduction to Japanese history. I wish there were more maps and illustrations though, and an introduction so if you know a lot about Japan you might want something else.

While wide-ranging and detailed subjects in this book might make some readers confused. But the authors' intention to cover many aspects that defined Japan as she is nowadays also making this effort worthwhile and the book worth reading.

A good basic history of Japan for the price. Given the thousands of years of history of this complex society, this work is best treated as an introduction that can lead you to detailed works on periods or subjects.

Very comprehensive and well written. A little more detail than I needed in some of the early chapters but an excellent review of Japanese history.

A comprehensive account of Japanese history for the general reader. In addition to the major political and economic developments, it provides an excellent introduction to Japanese art, literature, architecture and other cultural milestones in their historical context. An excellent introduction for anyone planning to travel, work or study in Japan.

Kind of a fanatic on the most powerful man EVER! I'll soak any information about him that I can.

I enjoyed this book

I enjoyed this book - it covers the entire history of Japan, politics, and culture. Mason does seem to be a bit biased against the US (in WW II) and for Japan, which kind of soured the reading experience.

Fascinating and very well written. I purchased this book because of an upcoming trip to Japan and me not only learned a good bit of the country's history but also gained more of an understanding of the people of Japan.

Recommended before going to visit.

This AUDIBLE was well written and well-paced. The writer didn't wait too long on any one topic.I'd suggest the audible to anyone who requires visiting Japan and spend their time travel easily and enjoying, instead of being uniformly culturally challenged.

The progression in telling of Japan's history was well organized and the writer was able to constantly relate the history and culture of Japan to influence/impact to/from other countries.

Japan as history has proved persistence and determination. As the author reasons, many times thus nation had declined and was supposed to fall, yet changed its difficulty into progress, financial and cultural.

It retains the user focused on the most important historical times and encourages the user to better understand, for many mysterious and confusing nations, that from a warrior nation became a peace-spreading nation.

The writer brings sufficient detail to the table to stop it from being dull, coupled with passion and a simple style which makes it worthwhile.

A comprehensive history of Japan

Japan though this audible happens a little bit for the things it leaves out and the fact that it concentrates too much thought to almost complex cultural events without spending equal energy to the political and military community. I would suggest this audible for a good start to learning about Japan.

For me it was a lot of work.

An ideal present for a person just giving interest in Japanese or Asian history. Contracts with the major points, the dynamic twists, and turns, in Japan through its history. It also dispenses with the culture, the religions, the growth of city life, the arts, the political and technical changes with just the right amount of knowledge.

My Mother loved it !

The audible also guides to light why people think you're Buddhist if you're Japanese. Very interesting. I agree with the other commentator that it concentrates on the imperial history, apparently the most well-preserved and shown, and available. This is also the most maximum of what they teach in Japanese history classes.

I learned about the guides and concepts in Japanese history, described simply and in detail.

Everything I got was a masterpiece. Including both political, military and, leading, cultural details, this audible is a must-have for people engrossed in the history of Japan, both for those with and those outdoors anticipation.

About the worst book I've purchased on a country I am fascinated by.

Robotic and plodding. Dreadful, like being in grade 2 again.

Book was brief butfine, audio not so great

Reader was monotone and coughed near end of 4th chapter on tape, seems to be poorly edited. Now, not saying you're not allowed to cough, but if you're going to put something out and take monetary compensation for it, shouldn't you at least make the effort to clean it up and make it somewhat professional?