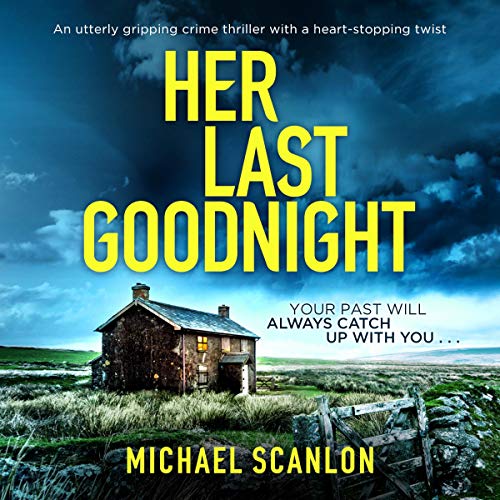 Eddie stands at his door anxiously waiting for the woman to arrive, touching the engagement ring box in his pocket for luck. He doesn’t hear the footsteps behind him until it’s too late…

Detective Finnegan Beck is called to a crime scene - a remote house near the rural Irish town of Cross Beg - where a dog lies whimpering beside his beloved owner’s body.

At first it looks like a burglary gone wrong. But Beck spots something his colleagues didn’t. The victim, Eddie Kavanagh, was wearing his smartest clothes. He’d brushed his hair. And, on closer inspection, a small velvet box containing an engagement ring is discovered in his pocket, along with a letter to a nameless woman, which seems to suggest she’s in danger.

Those who knew Eddie have no idea about a female friend though - there’s been no one in his life since a girl who he’d loved and who’d broken his heart decades before. Now Eddie leads a quiet, solitary existence, rarely going further than the fields behind his house to walk his sheepdog Max.

So who was the woman Eddie was waiting for? And did his connection with her ultimately lead to his murder? When a beautiful young woman is then found beaten to death, murdered exactly as Eddie had been, Beck has to ask - is the danger over? Or is it just beginning?

An absolutely addictive and atmospheric crime novel that will leave you gasping for breath.

Best of the First Three Books

I am truly enjoying this series. I primarily read books by Irish authors, read by Irish narrators, and I particularly appreciate it when the same narrator is employed for an entire series. Ruairi Conaghan doesn’t have a wide variation in voices, but does an entirely adequate, and enjoyable, representation of the characters. I, personally, don’t need an unflawed super hero of a main character. I rather enjoyed Beck’s backstory of childhood trauma that continues to affect his personal and professional life. His excessive alcohol abuse is part of that ongoing story and getting to know Beck as a person, not just another Miss Marple-type solver of murder mysteries. Finnegan Beck is flawed in oh so many ways, which just makes me want to root for him all the more. We just have to suspend belief sometimes, however I do love the addition of the instantly, albeit utterly irrationally loyal Max to Beck’s life in this and, hopefully, future books. I am indeed looking forward to many more novels in the Detective Finnegan Beck series.

“I prayed to be delivered from the maelstrom”

Relevant Themes Artfully Explored. This, the 3rd in the Finnegan Beck series,is excellent. The exploitation of women, denied agency over their own bodies is adeptly relayed. The pernicious and deeply ingrained entitlement, culturally sanctioned, that men exercise over women is laid out with precise emotional impact.
A parallel theme of the lasting damage from childhood trauma, in the case the man character’s, is told with sensitivity and without resorting to cliche.
Interesting characters and cracking dialogue. A plot that keeps you trying to guess what’s next.
I definitely recommend this.
Bravo Michael Scanlon.

I love this series! Detective Beck is a fascinating character and the stories are well told and plotted. Can’t wait for the next one.

Interesting but not my favorite

The third book in the Finnegan Beck series left me disappointed. The case itself is fascinating with many different aspects. But Beck himself is a mess. Yes, I know, flawed characters make for good stories but sometimes it’s too much. I felt his struggles detracted from his abilities and results on the case. The narration of the audiobook was wonderful to listen to.

I gave this book high ratings because throughout it is believable and a convincing insight into A little explored aspect of the Irish psyche which has resulted from a history of religious repression.
On a more mundane level it is a ripping read and an excellent thriller.
Highly recommended and looking forward eagerly to the next book.

I do wish all the detectives in books went so lonely and drank so much. That aside this is a great yarn. I will read more.

It's quite possible I've found a new favorite author. and now I have to wait for a new release. Great story again and really enjoying the ongoing characters. highly recommended. And Ruairi Conaghan is just a brilliant narrator. Could listen to him all day.

Exceptional narration of a gripping tale

Underrated descriptive offering. Above average. Captivating. A powerfully characterised narration not to be missed. Narrator Ruairi Conaghan is outstanding. He takes you there. Highly recommended.