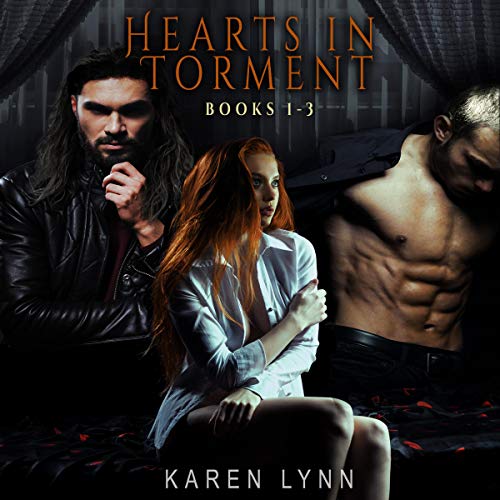 A War of Hearts - book one

Logan is poison, and Kristen knows it. His lust for drugs, sex, and danger has spiraled out of control. Yet every time she tells herself it’s over, his seductive power draws her back. Caught in a vicious cycle of love and hate, she is on the verge of insanity. Until Jake - a man ready to die for her.

A Sea of Smoke - book two

Kristen is in serious trouble. Trouble that starts the day she betrays Jake. Turns lethal the moment she trusts Logan. Trust that stems from desperation and misery.

Yes. Kristen made a terrible decision. She chose the wrong man. And now, the countdown begins.... Eight more months to freedom.

Except there are three little problems: Logan is a killer. Kristen is at his mercy. And Jake is 2,000 miles away. Devastated, heartbroken, and hungry for revenge.

Too many secrets.
Too many lies.
The inner demons are back with a vengeance.

Kristen is a survivor, only this time she’s gone too far. She left a mess behind. A mess that’s impossible to clean up. When Logan took the heat, it seemed the perfect solution. Redemption for him. Freedom for her and Jake.

Enter the twisted world of toxic love if you dare for an unforgettable emotional roller-coaster ride. You will never be the same. But remember, it is intended for mature audiences 18 and up. It is not suitable for minors and those with a sensitive disposition.

Would have been good if not a cliffhanger!

I was given a free audio copy of the 1 through 3 parts of this series. It is a good story full of dysfunctional people and issues and situations that should make everyone’s head shake. There are more than one bad guy in the story but the main one I even started to like and then I found after listening for days this ends in a cliffhanger!! No forewarning nor nothing stated that I found telling me that. I HATE CLIFFHANGERS AND WOULD HAVE NEVER AGREED TO LISTEN TO THIS HAD I KNOWN! The author was concerned from the beginning whether I’d take the time to listen to these. Wouldn’t you think she might have brought up there was more to the story. So even though I liked what I listened to so far I won’t waste anymore of my time on this author. I feel that is misleading since most people I know are fond of cliffhangers. When I asked after I was done listening the author did mention that some of the reviews on the separate books mentioned it was undone. I don’t think its up to the readers to inform readers/listeners that it’s a cliffhanger.

This story will take you on an emotional roller coaster you will likely never forget! Great storyline but IMO too long with no HEA.
The narrator has a great voice that’s loaded with emotion. That being said at times it was a little difficult to distinguish between characters.
This story was not for me but I know many have enjoyed it. This is only my opinion and I encourage you form your own opinions.
This is for books 1-3 (box set) that continues on to book 4.

This is the first time I have listened to this narrator and my first experience with this author and I would say that I enjoyed them both. I was thrilled to see that books 1-3 were included with this box set but it does still end with a cliffhanger so just be prepared.
this story is not for the faint of heart and involves a twisted love triangle between three people who all display good and evil traits. It seems as if no one is the innocent party in this interesting game that they are playing. Everyone has lies and secrets that they are keeping and it will keep you guessing up until the end.

This is a great story with a well thought out storyline. It definitely took me on a rollercoaster of emotions. The narrator does a great job telling the story. I look forward to reading more from Karen Lynn.

best listen in a while in romance

being able to listen to all 3 books at once is amazing. I got hooked on the first book. the story will have you wanting more and Jake is the best book boyfriend to have.

I love a good dark romance, and anything that's psychologically thrilling. This, however, I didn't find to be truly dark. There are certainly dark moments, but many non-dark stories needs those in order to get to other parts—this has more of that going on than being befitting of the title 'dark', at least in my opinion.

Still, it's got all the makings of a great read: antagonists you'll love to hate. A protagonist who ... you may or may not find yourself rooting for, but will sympathize either way. The author does a great job of really bringing out emotions in the reader and getting characters' real feelings across as well.

For me, this trilogy had some continuity issues I couldn't live with.
However, this author has demonstrated many strengths, and a true talent, so I'd totally read more from her and will be looking into the rest of her catalogue.

Wow this books takes you on a rough and tumble trip. Love, lust, drugs, obsession, money which is most important? Which will win?

This series is intense I find myself loving characters, finding them sympathetic, and hating them all at the same time. I am immersed in their lives and waiting for the next book.

This bundle is definitely a long listen but well worth the time. I really enjoyed this story, it kepts me interested and questioning throughout. I definitely look forward to book 4!
the narrator does an excellent job bringing this book to life! I look forward to more from the author!

I absolutely loved this! This was my first read/ listen by this author and it was so good!

Get ready for a wild ride with lies and betrayal and all the drama!

This series will definitely keep you on the edge of you seat the whole time!

I’m sure it was an exciting listen, just not for me.

I should have researched the box set before accepting the U.S. code. Thank you, Karen Lynn! So that was my fault. My favorite genre is detective murder mysteries, both U.K. and U.S. Narration by Claire Riley is well-done, however the plot never grabbed my attention. I apologize to the author for not doing my homework before accepting a code. I’ve learned an important lesson.

The author was so good writing the characters that I wanted to repeatedly punch Logan in the face with a brick really, REALLY HARD, and Logan isn´t even real

I don´t have any triggers, what I know of, but I really dispised/hated Logan in everything he did in the story from the first book. I had to take a break a few days before I could continue on the second book. It was the same between the second and third book as well.
It took me a few chapter in to understand everybody involved, after that it was just go with the flow.

Great job - narrator Claire Riley, only (little) negative - could have had more different voices on Logan and Jack.
The author Karen Lynn are new to me and I´m looking forward to listen/read more of them both.

This book was frustrating for me and tormented my heart to finish. I cannot say that anyone of these characters were likable but yet had to keep going to see how it ended. Of course it left me hanging in the end so that I need to also read book 2

I wanted to put this book down plenty of times. The stubborness and tension in these people’s relationships are frustrating to the max! There are however a couple of twists you couldnt see coming and I am looking forward to the culmination in the third book.

Another dark continuation of the tumultuous relationships between Christen, Jake, Logan and Gina. Although still frustrating with all the conflicting backwards and forwards there were some unexpected twists leading to a cliffhanger ending!

intense. unpredictable twists and the story is far from boring. i liked the characters and the narration was really good. well written.

The characters in this book are nothing short of a raging hot mess. This book has abuse, loads of cheating and straight up dependency on everyone but themselves. If you are looking for screwed up and crazy flawed characters in your books than this is the book for you!

I agree with others that less drama and angst would have made this book an easier read. The changes on view points at times were confusing. It made me have to use my brain when I just wanted to zone out into a different world.

The story well written and well paced, and I felt that the narration was good. I enjoyed the narrators voice and she certainly brought the characters to life. I also like the interchanging point of view from the characters and I always knew whose mind I was in.

Unfortunately I struggled to relate to this story as much as I hoped. I do like dark novels and a good romance or dark love affair but for me there was almost too much drama, most of which was avoidable ie the multiple cheating and lies and not enough suspense or edge of my seat thrills.

Kristen, Logan and Jake are caught in love triangle fuelled by lust, jealousy, betrayal, and sometimes downright obsessive love. The burning question that everyone wants the answer to is who will Kristen choose, her dangerous husband Logan who despite his flaws she lives with her whole being or Jake, an upcoming artist who craves her love and is insanely jealous of her husband Logan.

If you enjoy a lot of drama with a dark romance theme, this story is well written and narrated and be prepared to read a roller coaster of emotions!

Well written story that plays with your emotions, one minute I felt annoyed with Logan the next Chrissy.  This is about some very dark, confused and obsessed characters stuck in a complex love triangle where they expect sex and drugs to be the resolution to all of their issues.  The narrator did a really good job on staying consistent throughout this long book and really brings the characters to life.

From a slow start coming a steamy well balanced romance thriller, lots of danger and sex at the same time as an emotional roller coaster absolutely loved it

I wouldn't class this as a thriller.
If you like turmoil drugs and sex then this book is for you.

The characters were Infuriating, the story too descriptive and boring . I can’t believe I listened to the complete trilogy, but that me, once I start something I have to finish!! But was disgusted to find out that the never ending story continues with other books which I will NOT be purchasing. Sorry!

The right amount of romance, darkness and spice! Characters are relatable, well brought to life (I just hate Logan so so bad! )
Narration is really good.
It isnt your usual vanilla romance, which I personally like.

couldn't get into it

struggled to listen to it. just found it didn't capture me from the start. listen till the start of chapter 1.

Team jake or Logan.. Or perhaps Tony mayb... 😬😤 How long must we wait to find out.. i struggled with daily activities, i went into FULL story time mode, how could christen .... possibly be so oblivious to whats going on.. & how painfully, frustratingly beautiful she is at the same time, Y did it end.. I no right 😄 49+ hrs & WANTING MORE.
&..
F⚘🌺🌼🌻🌷s for Claire Riley's awesome story telling abilities..
U feel all she reads & go deeper with every word Spoken / written.