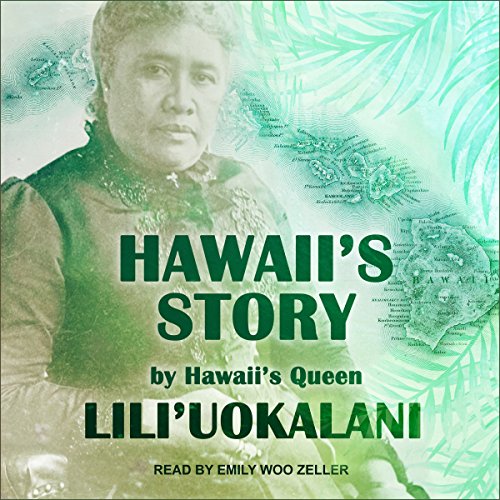 In 1893, Liliuokalani, the Queen of Hawaii, was deposed and five years later her nation became an incorporated territory of the United States.

Published shortly after these momentous events, her book Hawaii's Story by Hawaii's Queen is an incredibly personal history of the islands that she was born to rule. Liliuokalani covers from her birth in 1838 through the reigns of her forebears to her own turbulent time as Queen of the Hawaiian Islands.

Written to explain to the world the injustice of her situation and to reclaim the sovereignty which she had lost, the Chicago Daily Tribune claimed that "no scholar or lawyer could have state[d] it more effectively." But despite her persuasive prose Hawaii never again regained its independence or its monarchy.

Hawaii's Story by Hawaii's Queen is a fascinating history of one of the United States of America's smallest but most unique states as it was going through significant change at the turn of the 20th century.

Queen Liliuokalani was the last reigning monarch of the kingdom of Hawaii. She ascended the throne in January of 1891, upon the death of her brother, King David Kalakaua. For years after her overthrow, the Queen sought redress in the Congress and courts of the United States, but her efforts failed. Her autobiographical history Hawaii's Story by Hawaii's Queen is the only work by a Hawaiian monarch and provides insight into her fight to regain her throne and life on Hawaii during the late-19th century.

This is a wonderful book. I have a hard copy and it is great. Unfortunately, the producers and narrators don't know much about the Hawaiian language. The narrator mispronounces almost all of the Hawaiian words. It's worse than nails on the blackboard. I can not relax and listen because her pronunciation is so horrible. This was a terrible waste on the part of the production staff and the narrator. And a real waste of my money.
Painful!

Been meaning to read this book for years. If you find this book interesting you'll also find a tour of ʻIolani Palace in Honolulu fascinating too. I can appreciate that the narrator took the time to learn the Hawaiian language pronunciation, but as someone who grew up in Hawaiʻi, the words didn't sound quite right and were a little distracting. I wouldn't go so far as to say they were wrong, they just sounded slightly off. I think if I wasn't from Hawaiʻi I probably wouldn't even notice.

I was excited to know that the history of our Queen was Audible. However the tone and mispronunciation of the Hawaiian names, words etc was difficult to listen to and therefore I did not finish the audible. I went back to rereading “Hawaii’s Story Hawaii’s Queen”. It’s too important of a story to suffer through without correct Hawaiian pronunciation.

I tried so hard to listen to this book, but the narrator’s style made it impossible. The first word in every sentence is explosive and so loud!!! It isn’t as apparent in the sample but it tore me from sinking into the story as it feel like an assault.

I loved the book, the story, the insight into the Queen's point of views and her version of Hawaiian history. What I like was the terrible audio engineering. The reader did a good job, but the compression of the recording has been set to an extreme without any envelope shaping, which results in a hearing damaging recording. It's almost impossible to listen to this recording without hearing protection because of the harshness some syllables. Almost each sentence begins with a ear damaging peak of sound. very disturbing and as written above, impossible to listen to without hearing protection or strong EQing if your device is capable of EQing. Sad, it could be a wonderful piece of audio work, but the mixing and mastering has been poorly executed.

Great Voice narration. Read several other history books, this was a skewed point of view compared to others books. She seemed to perfect, was trying to play the role of a Martyr. Did like the details whennit came to name dropping.

This should be required reading for all Americans

If you’ve ever been to Hawai’i and loved it- and let’s face it, if you’ve been to Hawai’i, and there’s not something wrong with you, you’ve loved it ;) -you should read this first-hand account of exactly how American business, aided by America’s government, forcibly took control of the Hawai’ian islands and imprisoned its rightful and duly elected monarch. Emily Woo Zeller reads the text beautiful and accurately, and her Hawai’ian pronunciation is very good. A+ from me.

History from the Indigenous perspective is enlightening and often enraging. This should be required reading in American schools.

Story of a nation wronged.

Fascinating story of the overthrow of the Hawaiian monarchy...written by Queen Liliuokalani. A true travesty of justice and a shameful blight on American history.
The narration was excellent and draws you into the story. Historically accurate and having lived in Hawaii for several years, it brings a new understanding of the sovereignty movement.

I found this book quite an interesting look behind the curtain of the Hawaiin monarchy. And Lili’ukolani’s details of the overthrow become quite gripping with drama. Well worth a listen and excellently narrated