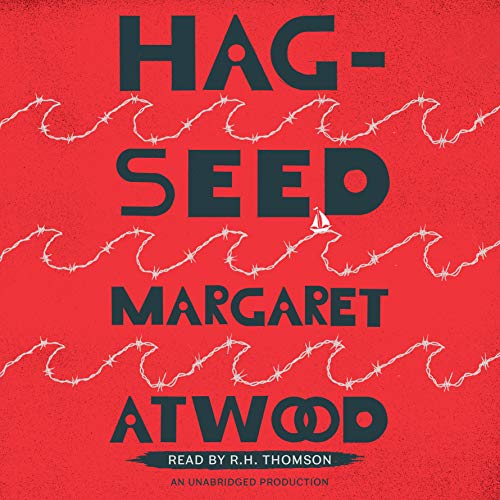 The beloved author of The Handmaid’s Tale reimagines Shakespeare’s final, great play, The Tempest, in a gripping and emotionally rich novel of passion and revenge.

“A marvel of gorgeous yet economical prose, in the service of a story that’s utterly heartbreaking yet pierced by humor, with a plot that retains considerable subtlety even as the original’s back story falls neatly into place.” (The New York Times Book Review)

Felix is at the top of his game as artistic director of the Makeshiweg Theatre Festival. Now he's staging a Tempest like no other: Not only will it boost his reputation, but it will also heal emotional wounds.

Or that was the plan. Instead, after an act of unforeseen treachery, Felix is living in exile in a backwoods hovel, haunted by memories of his beloved lost daughter, Miranda. And also brewing revenge, which, after 12 years, finally arrives in the shape of a theatre course at a nearby prison.

Margaret Atwood’s novel take on Shakespeare’s play of enchantment, retribution, and second chances leads us on an interactive, illusion-ridden journey filled with new surprises and wonders of its own. P

“What makes the book thrilling, and hugely pleasurable, is how closely Atwood hews to Shakespeare even as she casts her own potent charms, rap-composition included.... Part Shakespeare, part Atwood, Hag-Seed is a most delicate monster - and that’s ‘delicate’ in the 17th-century sense. It’s delightful.” (Boston Globe)

“Atwood has designed an ingenious doubling of the plot of The Tempest: Felix, the usurped director, finds himself cast by circumstances as a real-life version of Prospero, the usurped Duke. If you know the play well, these echoes grow stronger when Felix decides to exact his revenge by conjuring up a new version of The Tempest designed to overwhelm his enemies.” (Washington Post)

“A funny and heartwarming tale of revenge and redemption...Hag-Seed is a remarkable contribution to the canon.” (Bustle)

The play on the Play's the thing


Felix Phillips, Artistic Director of the Makeshiweg Festival, is having a run of unfortunate events these days. Having lost his wife, then shortly thereafter his young daughter, he had thrown himself into a very ambitious and avant-garde production of his favorite Shakespeare play, The Tempest, only to have been betrayed by an alliance of plotting so-called friends to have him removed from his position. Felix storms off the set, and seems to disappear from the theater scene, all the while sheltering in his home (with the spirit of his dead daughter) and planning his big come back, and his revenge. Atwood sets up a Shakespearean revenge plot with subtle bits of comedy, the supernatural, and some reconciliation all worthy of the Bard's The Tempest.

Ten years later, Felix's former colleagues have lost connection with the man they double-crossed, but Felix has been watching them, noting every move meticulously. Now he resurfaces as Mr. Duke, the new Artistic Director of The Fletcher County Correctional Institute in Ontario, courtesy of the Literacy Through Literature program, financed by a city official that once conspired to take his job at the Makeshiweg. Of course, his project is to be The Tempest. He plans on doing his version and inviting the unsuspecting traitors to the opening performance. He casts himself as the play's Duke (Duke of Milan) that has been living in exile, Prospero, a powerful magician that has worked up some nasty tricks tucked up his sleeves. He'll have his revenge and he'll have his Tempest. But, Shakespeare and Atwood would never let such a plot go forth so smoothly, or predictably...double, double toil and trouble...

The real story and the best part of the novel take place at the prison. Duke's professionalism and love of the theater shine through his interactions with the prisoners in spite of his vengeful plan. Aware of the population's histories, he allows them only swear words they can pull from the play they are doing (Hagseed=the witches son Caliban; Poisonous bunch-backed toad!; scurvy companion; abortive, rooting hog! ). Profanity not directly from Shakespeare earns them penalty points. It makes for imagining some funny scenes. Unforeseen by Mr. Duke when he conjured up his plan was how Shakespeare's writing would positively affect the inmates. The more they participate, the more they begin to understand his times and his themes and to respect him and his writing. Under the spell of the Bard, they begin writing their own takes on the play, mostly rap, which are at times both profound and profane. It's brutally clever, wild and tightly strung.

As with The Tempest, Hag-Seed contains multiple storylines within storylines and multiple lessons that softened the sting of revenge and dark intentions. Trying to summarize Atwood's distinctive style is a ridiculous endeavor. While her strong political themes and parallels clearly steer her stories, without quoting her it's impossible to grasp the effectiveness of her imagination and emotions in each scene. Atwood always demands a good hard bit of reexamination, to adjust the focus from dystopia or fiction into the present real moment. It is usually in retrospect that the full vision of Atwood's novels comes into view, at least for me. (This wasn't like her dystopian The Handmaid's Tale, but it does deserve a good look back.) Hag-Seed wasn't my favorite Atwood novel, though I do recognize the brilliance (and I love The Tempest). I personally prefer her more dystopian and political novels, and I know that I could not have gotten through this if I had tried to read the text.

The play's the thing, and here it is clearly outlined and explained as Mr. Duke redirect's his own version. Even if you aren't familiar with Shakespeare's play you'll be kept on course (but a quick Wiki look would be a great help). In the case of Hag-Seed, the play may not be the thing -- it may be the narration of Atwood's writing. R.H. Thompson is a-maz-ing! He raps the lyrics of the prisoners with complete conviction and jaw-dropping talent. How he did it so perfectly, I don't know, but this is a case where he could quit his day job. This is the performance of the year in audiobooks!

This is a brilliant, inventive story—not surprising from Margaret Atwood, I know, but it surprised me anyway. I was enthralled from beginning to end. This story was so complex and so human that it read as a holy text to me. All the craziness, love, spite, tenderness—in short, all the vagaries of being human—were there. It was brilliant.

In the beginning, I didn’t like the narrator and considered abandoning the audiobook. He was just so theatrically-enunciated and absurd! But as the chapters unfolded, his narration changed; first, it changed as the main character changed, and then, it changed as the characters changed. By the end, his voice was wielded with such skill that he made me gasp, and cheer, and cry. A superb voice actor, indeed.

I have not one single quibble with anything about this book or its narration. I’m going to listen again, right after I finish re-reading The Tempest.

I'm not sure who, aside from English teachers and theater buffs, would be the audience for this novel. But, as a member of both subcultures, I loved it! I teach The Tempest each year to my seniors, and I am thinking quite seriously about having them read Hag-Seed in tandem with it. Margaret Atwood is one of the great writers of our time! Phenomenal work!

If you could sum up Hag-Seed in three words, what would they be?

Favorite Shakespeare text, possibly favorite modern author, how could it not be a win!

The narrator was beyond compare.

The English teacher in me loved this book on multiple levels. The literary allusions felt like inside jokes, and Atwood's clever working in Shakespeare's work through several layers of the story made me happy. The theater teacher in me applauds the recognition that literacy can be taught in many modes and the most insightful students are often the most surprising. Brava!

Couldn't wait for it to be over

I was hoping that this was going to be really enjoyable. Just wasn't. Extremely unrealistic as far the plot and I didn't care for the parallel to the Tempest, wasn't the best written. I hate the rap songs that were in some 1950's "Rocko" Mafia accent. I'm survey this will appeal to some (Shakespeare Fanatics) , but not to me. I really like Atwood's prose, but not on display here.

A little tortuous and over long. Like a literary equation that had to be solved and examples of every possible explanation wrung out. Impossible to care about the characters-/ciphers all.

Both the story and Thompson's narration were fantastic !! An inventive spin on Shakespeare's Tempest.

Great Re-telling of The Tempest