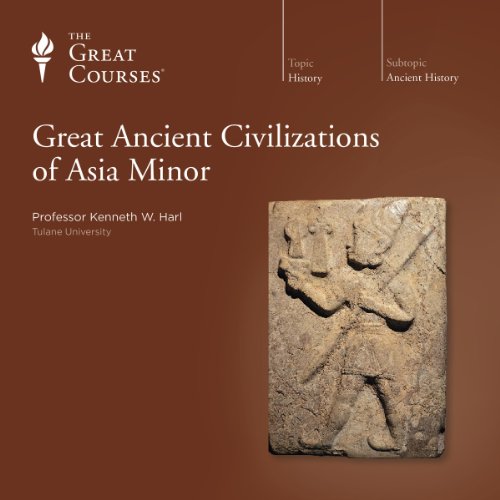 Embark on an unforgettable trip into the historical glories of the past with these 24 lectures that immerse you in the history of an often overlooked region of the ancient world.

With Professor Harl as your guide, you'll plunge into the history of Asia Minor's great ancient civilizations and come face to face with eye-opening historical milestones. Among these: the rise of the Hittites, the legendary Trojan War, the birth of Western philosophy, the fiery Greek and Persian Wars, the victories of Alexander the Great, the dawn of the Hellenistic Age, the spread of early Christianity, the golden age of Byzantium, the birth of the Ottoman Empire, and much more.

Cultural change and continuity are the main themes of these lectures. You'll come to see how each successive civilization inherited and modified the political, social, religious, and economic institutions of its predecessor. In fact, the scope of Anatolian history can be best understood as a series of major cultural and religious rewrites: first by the Hittite emperors; then by the elites of Hellenic cities; next by their Hellenized descendants in the Roman age; then by Christian emperors and bishops in the Byzantine age; and, finally, by Turkish rulers and Muslim mystics.

There Ain't Nothin Minor about this Asia!!! : )

This was a great overview of a history of Asia Minor (or Anatolia), what today would essentially be the area of the modern Republic of Turkey. Far from being an obscure topic about an obscure region, this little area is packed with history and was a major player throughout it.

You will go from prehistory and the earliest Hittite Civilizations through the continual cycles of change the region experienced. As the natural crossroads of East and West, this region continually felt the pulls of the great cultural traditions of both East and West, a dynamic which continues right up to the present. This area was constantly "remade" as it went through phases of Greek, Roman, Celtic, Byzantine, and eventually Barbarian Steppe culture. The series ends with an look at how those Turkic speaking barbarians entered and remade this peninsula one last time into what would eventually be the heartland of the Ottoman Empire and the foundation of what we know as the modern Republic of Turkey.

The Professor is amazing. I have listened to many of his works and he offers his listeners traditional history at its very best. If you enjoy a good history book or class, you will learn from and enjoy this series.

Dr. Harl is clearly "into" his field of study, and his awareness of the interconnectedness of Ancient Turkey with Mediterranean countries, ancient Mesopotamia and further east, made this a fascinating series of lectures covering the times span (approximately) of about 1700 B.C. to 1700 A.D. He was (auditorily) an animated speaker who kept my attention throughout, and I stole time to listen to his lectures wherever I could. My only regret that this series of lectures was limited to a total of 24. I do, however, see that Professor Harl has more in-depth lecture series on each of the parts discussed in this overview, and I will have to make that my next goal.

A Little Too Broad

This course was not exactly what I was expecting. From the title, I was expecting the course to focus on the ancient past more than it did. This course spans from the earliest civilizations of Asia Minor up to the Middle Ages. Since the course only has twenty-four lessons, this meant going through some major topics pretty fast. While I felt the scope was too broad for this course, Professor Harl is one of the best Great Courses professors and his skill as a teacher overcame the deficiencies. I learned a lot from the course, even if I would have preferred a more narrow focus.

I’ve been purchasing all of Dr. Harl’s lectures. He does a wonderful job of voicing the narrative of civilization as man attempts to solve one great problem after another, and spices it with humorous stories of the all too human failings we are heir to. Good stuff.

Anything by Kenneth Harl is going to be entertaining and informative; this lecture series is no exception.

Prof. Harl is excited about Asia Minor and his excitement is contagious. He goes into enough detail for us to understand, without bogging down unnecessarily.

Unfortunately, I just could not get into this course and found my mind wandering way too often. I hope it wasn’t a case of the lecturer’s style not resonating with me because I have already bought a number of his other courses because the topics he covers really interest me. Maybe this was just a specific sub-par effort but the reviews are extremely high so a lot of people don’t feel that way.

I purchased this course because it covers the many civilizations that came to occupy this region of the world but I felt the professor didn’t do their stories justice. I wished he’d spent more time introducing the peoples in a chronological/narrative manner but instead he seemed to assume listeners knew specific events and had a foundation of knowledge and the lectures instead felt like a fast recitation/rapid fire of many civilizations and facts in some cases without discussion of a greater meaning/bigger picture. At times I felt lost trying to keep up and maybe that’s why my mind gave up and kept wandering. I feel like the best history Great Courses are those that explain the basics and facts and then provide any additional details or insight.

The abrupt endings to lectures without a conclusion, “winding down” comments, or preview of the next lecture were jarring. The sudden round of applause at times to mark the end of a lecture caused me to jump once or twice---no idea he was finished!

Additionally, the professor used a lot of “filler” words including “Uhh” and “Um” which became very distracting as the lectures wore on. In one lecture I counted 44 in the first 4 minutes. 300+ for a 30 minute lecture just makes it way too distracting.

I am going to try "History of the Ancient World: A Global Perspective" next in the hopes of a better understanding of these civilizations.

Harl does a fabulous job conveying the subject matter and explaining the Asia Minor History. This is my third course of his and he is passionate about the material and that makes listening to him all the more exciting.

Speaking style not to my liking

I found the "uh..uh...uh" and "uhs" distracting. The speaking style was not engaging and I found my mind wandering often.

woah, i was supprised this got so late into antiquity cause i haven't even read julius caesar, suetonius, josephus etc yet. but then we just charged right through the crusades. should really be titled "Asia Minor from Ancient Civilizations to like, Yesterday.."

These are great lectures, but told awfully quickly and tersely. Some people may find, like me that its hard to maintain attention and your mind wanders off. BTW lecturer sound like Agent Smart in TV series, Get Smart.

Should have kept to its title

The history of Anatolia is a topic of great interest; indeed, hardly any region of the world has seen greater changes over the last few thousand years.

Compressing all that into 24 lectures can only ever scratch the surface. The course is misnamed in referring to 'Ancient Civilisations'. 'Ancient' might arguably end with The Bronze Age, but in my book it would pretty much end with the Hellenistic period, or the Roman at a stretch. It certainly wouldn't include later Byzantium, the Holy Roman Empire, Seljuk Turks, Crusaders or the Ottomans, all courses in their own right. A 36 or 48 lecture course that kept to the earlier periods would be far more rewarding.

The combination of a shallow survery and Prof Harl's rather dreary presentation meant that I didn't really engage with this course.