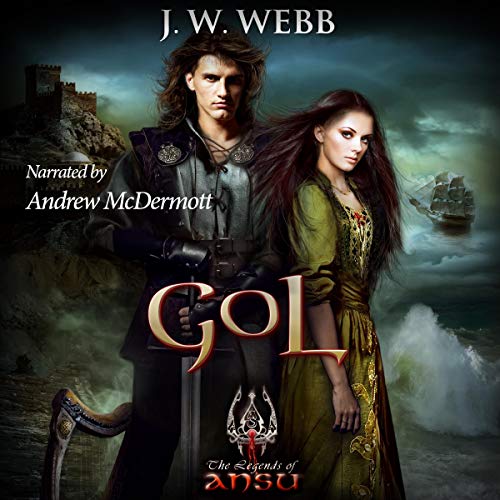 In a world about to be destroyed, star-crossed lovers Lissane and Erun will do whatever it takes to escape the destiny in store for them - and the families sworn to keep them apart.

When a vengeful sorcerer unleashes a Fire Demon to destroy his rivals he sets off a chain of events that will eventually destroy Gol, a war-ravaged continent at the other side of the world. Unaware that time is running out Gol's scheming barons overthrow their king and strive to seize control, unleashing a bloody civil war. Baron's daughter Lissane, and commoner Erun find themselves caught in the web of murder, treachery, and sword and sorcery threatening to destroy their existence.

The lovers plan to flee Gol before its foretold ruin. But Baron Barola already has plans for his daughter and sends his brutal sons to deal with Erun.

Gol mingles, mystery, myths, and legends with gritty action and snappy dialogue, woven to an epic tapestry of dark fantasy. The novel introduces the listener to the Legends of Ansu, a spell-binding new fantasy series that will appeal to fans of Game of Thrones. If you like tough action featuring gritty characters set to a vivid fantasy backdrop of war, treachery, and vengeance, then you are going to love this new tale by JW Webb.

Pick up Gol to discover this exciting series today.

Great story. Spans many genres. Fantasy, scifi, romance, action. I love the authors work and this one is definitely one of his best. Perfect narrator for the story as well.

So funny story about this book, But first, I was gifted this book by the author in exchange for my humble opinion. Well I requested the book be gifted to me because I thought it was a prequel to a Legends of Ansu fantasy series written by the same author that I had already read book 1 of, lol but alas it was not. With that said though, I now have a second series to finish reading by Mr. Webb. JW Webb has a great talent for building characters that you become invested in. You want to know about their lives, struggles and adventures. This book is a history of the past of a people I have yet to get to know, but I am impressed by their ancestors. Erun and Lissane are so real in their lives as you listen you can believe and that is a great quality for me. This book ran me through the gauntlet of emotions, anger at the treatment, joy at the reunion, sorrow at the devastation. Over all a great start to a new series that I shall be reading. Thank you for the honor of your gift.

Gol is a brilliantly-written and thrilling fantasy, with intriguing elements. The storyline is engaging and entertaining, loaded with action and fascinating characters. J.W. Webb is an excellent storyteller with an incredible imagination. The world-building and character development are excellent, immersing the listener.

Andrew McDermott conveyed the characters, their personalities, mood, and animations, bringing the story to life. Overall, this was a fantastic listen, one I recommend. I was given a free copy of this audiobook at my request and have voluntarily left this unbiased review.

I really enjoyed it! There's plenty of action, drama, romance and suspense to keep you entertained. The narration was great. The author does a great job with the character builds and plot. I have read so many books by this author and have grown to love her writing style! I can't wait to read the more books in this series! I was given this free review copy audiobook at my request and have voluntarily left this review.

Enjoyed story and the narrator.
These books have been enjoyable very good to listen to.