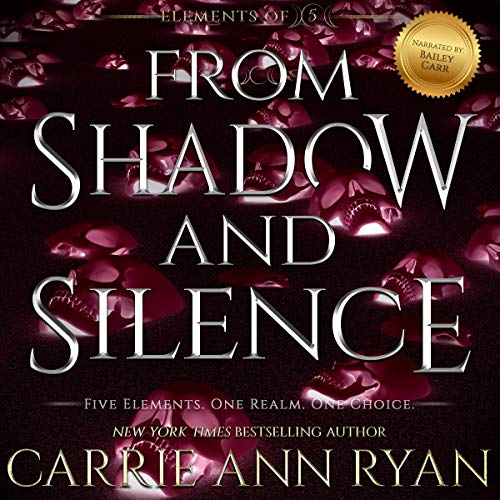 The end of the centuries-long war is almost here, and the fate of the realm rests on one girl’s shoulders. The Gray has gathered his forces - and has Lyric in his clutches. The enemy’s plan to control the kingdoms has been revealed, but traitors from both sides might alter the course of fate.

Lyric must return to Easton and the others before all is lost. Battle lines must be forged, and surprising alliances cast. The prophecy has never altered, and life comes at an ultimate price. Not all who fight will survive, but in the end, it will come down to the choice of a Priestess and her soul.

I don't usually listen to YA but I'm glad I gave this series a try. The characters are very well developed as is the world in which they live. The world-building is fantastic and I was able to envision the scenes as they were being described. The story kept me interested but Bailey's voice and narration kept me invested. It's a great storyline and I would definitely recommend it for those that love PNR or Sci-Fi.

I have loved this story from the beginning and was sad that it had to come to an end. These characters have grown on me and I am hopeful that we will get to revisit them. Lyric finally finds her place and the final showdown is here. Her, Easton and their friends will risk everything including their lives to save the realm and those that live in it. Lots of action and emotion in this story. I loved the narrators as well. Dive into this world in book one and you won’t regret it !

From Shadow and Silence

This story takes place in an interesting world with good characters and plenty of action.

The Narrators are good

This is the first YA series I have ever tried. I found myself so invested in these characters. I loved Lyric and Easton and all the other characters. It was such a wild ride and I enjoyed all of it. When you dig into this series start with book one. This is one of those that need to be consumed in order of the way it was written. After you start, you won't be able to stop.

The description of this book was on the spot:epic! The end of a very exciting series. There was so much drama, romances, and action, a century old war... This book wraps everything up beautifully. I enjoyed From Shadow and Silence so much! The narrators were awesome too. Thank you Ms Carrie Ann for another great series.

Amazing ending to a great series!

From Shadow and Silence by Carrie Ann Ryan is the fourth and final book in the Elements of Five series and it was full of surprises and had me captivated from start to finish. Narrated by Bailey Carr and Holter Graham, they brought the world of Elements of Five to life. All books do need to be read in order and it is so worth it. With new allies and enemies, our heroes are fighting for what they believe and stand for. I do not want to give to much away, but his was an enthralling paranormal story with a great story and characters. I could imagine this world and what our characters were facing while listening. This was a great ending to an amazing series and one I highly recommend.

Beautiful end to a series

Omg this final book had me.on the edge of my seat. I absolutely love the storyline and the way Carrie Ann Ryan made this story come to life. All the characters and the main characters I absolutely loved to read and all the twists. I love the ending. Beautifully written. Such a amazing finish to a amazing series.

What a amazing Narration from Bailey Carr and Holter Graham. I absolutely loved listening to them narrate this final book in series.

Exciting conclusion to this amazing series!!

Everything finally comes together in this exciting, action-filled last installment in this breathtaking YA series. I’ve been so curious to see how Lyric and Easton and all their friends—and enemies—would fare once the prophecy came true. I was not disappointed. Wow. The author did a great job throwing in some curveballs and surprising me with some of the plot twists. I love the mix of fantasy, action, and romance elements in this series and the way the characters, main and secondary, grow throughout their (mis)adventures. Lyric has really matured along the way, and I love her and Easton as a couple. I’m hoping this is not the end because I would love to read stories focused on the secondary characters we got to know and love.

Narration: I love Bailey Carr’s voice for Lyric and her narration reflects Lyric’s gentleness and determination both. I also very much enjoyed listening to Holter Graham’s performance of Easton. Both narrators do an amazing job with all the different voices for the extensive cast of characters.

At the very beginning of this wonderful series three friends, Lyric, Braelynn and Emory found themselves transported to The Mason Realm, a Realm divided into two Courts ruled by the Queen of Obscurité and the King of Lumière, two Courts who have been at war since The Fall. A war orchestrated by The Grey, an evil force so strong is it even possible to defeat him?

At the end of the last book a battle was fought between Lyric, her mate Easton (King of Obscurité) and all their friends and allies old and new against the King of Lumière and his allies and although many losses were suffered they won. Then Lyric and Braelynn, her familiar and best friend were taken by the Grey to the shadow realm.

The Gray believed he had the upper hand that Lyric was contained but she and Braelynn were stronger than he knew and they managed to get back to their friends and allies and a much relieved Easton. More of the prophecy was made known to Lyric making her believe that they could win the war against the Grey if they found more allies but that in the end, she would die.

Now the Prince of the Lumière, Rhodes and Easton the King of the Obscurité are allies, and together they search for more to join their family/ranks and they set out across both realms looking for more allies and defeating enemies as they go. This journey is not easy and it's not without loss as they work to unite the whole realm under one banner in order to be able to defeat the Grey. Enemies become friends, and the battle to end all battles is fought.

There is so much more I could tell you but that would involve spoilers and I don't want to do that, I want you to be on the edge of your seat, as I was on mine, waiting to see what the outcome was going to be. What I will tell you is that this was a wonderful conclusion to this interesting and intriguing story. All our questions were answered and peace was restored to the Mason Real.

As for Lyric, Braelynn and Emory even after everything, their friendship remains strong although none of the girls is as they were before.

The narration of this wonderful series by Bailey Carr and Holter Graham is consistently excellent, each character, and there are many, is easily recognised and the emotion they imbued lifted this excellent story to an even higher level.

I was given this audiobook as a gift and am voluntarily writing my review.

This is the last book in the series and must be read in order. Lyric has finally understood how to use her wielding with her mates help as well as the other friends she has made along the way on her journey to her destiny.

The journey hasn’t been easy there has been many challenges along the path but it’s helped her grow and become the Spirit Priestess.

Overall, from the start of the series until the end it keeps the reader interested and turning the pages.

The narrators were a perfect choice for the story.

Book 4 in Element of fire by Carrie Ann Ryan
Lyric has been through a lot many battles and lost many friends family.
Lyric and Easten are finally a couple but still have major struggles especially with The Grey trying to destroy and kill everyone.
Absolutely loved this book and even made me cry.
Gutted that this is the last book in series but the conclusion was done so well.
Absolutely loved the audiobook especially Bailey Carr but I won’t lie Holter Graham isn’t a favourite of mine but still loved the book.

What an epic conclusion to a series that I have loved and adored. This is one series where it is best to listen to them all in order as it gives such a strong connection to the characters and the world that Carrie Ann Ryan has developed.

Can’t wait for more from Carrie Ann Ryan as her writing is spectacular, there is intrigue, unique storyline’s and characters that I connect to and wish were real.