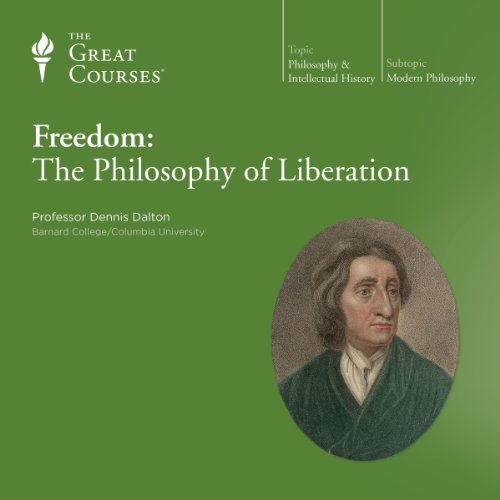 Professor Dalton explores the meaning of freedom and examines the progress of both personal and political freedom. These eight lectures are a guided tour along the byways of the philosophy of liberation, beginning with its ancient roots and ending in 20th-century America.

Throughout these lectures, you'll follow the progress toward personal liberation and spiritual freedom found in the lives of those who were often consumed by fierce and difficult struggles for political freedom. And you'll see that the results achieved along the way are not separate mysteries but truths linked by the same path.

But you'll also learn that the philosophy of freedom was never intrinsically American and has its roots in diverse ancient cultures. For example, you'll learn about the ancient Hindu philosophy of dual freedom as described in the Bhagavad Gita, the Greek philosopher Plato's study of freedom in the republic of Athens, and the major contributions Christian philosophy has made to the ideal of freedom. Traveling from the ancient world to the modern, you'll consider the lives and work of John Stuart Mill (the 19th-century philosopher who defined the meaning of freedom with extraordinary clarity), Mahatma Gandhi (the political leader who led the Indian subcontinent out of British domination), Martin Luther King, Jr. (who synthesized the teachings of Jesus and Gandhi to create a method of nonviolent resistance), and others.

Freedom: The Philosophy of Liberationに寄せられたリスナーの声

I'm a political philosopher, I teach at university and my specialty is freedom. This is indeed a great and entertaining course

What does Malcom X and M. Ganhdi have in common?

This is a great lecture. For the first four lectures, he takes the usual route to discuss freedom in the West: Plato, St. Augustine, Rousseau, Hegel, Mill. But I really enjoyed the last three parts of the lecture where he discusses the connection between Gandhi, Malcolm X, and MLK. It's a highly personal take on Malcolm X which I enjoyed hearing.

This course gives a basic overview of the philosophical concept of "freedom" or "liberation" as it has been developed mostly in the western historical context. The lectures begin with Hindu, Christian and Platonic concepts of freedom - i.e. freedom of a state to act without outside control, and spiritual freedom of a person from ignorance.

Quickly, the course then develops the more modern concepts of freedom - from tyrannical government or from oppressive classes - by introducing Locke and Rousseau. These ideas are continued through Hegel and Mill, with discussions of the liberal and nationalistic views of freedom which would be taken up in earnest in the 20th century on a global scale. One lecture is also devoted to Emma Goldman and the anarchist idea of absolute equality and freedom.


I have to say I was enjoying the philosophy immensely, and whilst the more discussions of the three activists were fascinating, I find myself feeling slightly cheated. Although they all had interesting ideas, such a shift in focus would be more suited to a longer course. Just under half the course is spent discussing these three 20th century figures, when there are a huge number of philosophers that were left out.

Having said that, the lecturer is absolutely brilliant. I am yet to find someone who can get me more interested and engaged with philosophy and his readings of quotes are incredibly exciting.

I definitely recommend this course, up to and including the Ghandi lecture. The rest is take it or leave it - still good but not the same as the rest.

I found this lecture series a refreshing look at some familiar characters but with a focus on Freedom which evokes thoughts of emergence, permission, will, belief, and power. I feel like I've just had an invigorating shower and want to stand up and be counted.