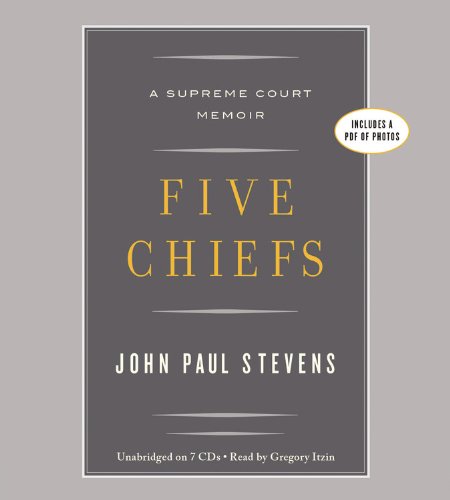 In Five Chiefs, Justice Stevens captures the inner workings of the Supreme Court via his personal experiences with the five Chief Justices - Fred Vinson, Earl Warren, Warren Burger, William Rehnquist, and John Roberts - that he interacted with. He reminisces of being a law clerk during Vinson's tenure; a practicing lawyer for Warren; a circuit judge and junior justice for Burger; a contemporary colleague of Rehnquist; and a colleague of current Chief Justice John Roberts. Along the way, he will discuss his views of some the most significant cases that have been decided by the Court from Vinson, who became Chief Justice in 1946 when Truman was President, to Roberts, who became Chief Justice in 2005.

Packed with interesting anecdotes and stories about the Court, Five Chiefs is an unprecedented and historically significant look at the highest court in the United States.

Half Biography, Half Memoir

"Five Chiefs" is an excellent book, though it often strays from the story it is trying to tell. The author begins by saying that his purpose is to tell a story about the Five Chief Justices he had the opportunity to know from the time he was a law clerk to his retirement from the countries highest Federal Court. While there are indeed many interesting stories and anecdotes about these five men, the chronology is often interrupted by Justice Stevens' appraisal of their legal philosophies. Particularly when it comes to Burger, Reinquist, and Roberts, Justice Stevens begins by telling us how they were as managers of the Court, and then proceeds to tell us how he disagrees with a number of cases they authored. While this is certainly interesting, it strays from the purpose of the book. Though I suppose when you've spent nearly half a century serving your country, you are entitled to take liberties as an author, and I think most readers will gladly forgive these tangents. :)

A few words of warning:

(1) This book is filled with legalese. While the author does a good job of explaining his legal discussion, it might be harder to follow for someone who doesn't have a legal education. If you ARE a lawyer by trade, then his discussions of constitutional law will be pretty straight forward and understandable.

(2) If you fall into the Scalia/Thomas camp of Constitutional law, you will not agree with the author on most issues. In fact, in this book he is often critical of the conservative block on the court. If this criticism will make you angry or motivate you to write a negative review for political reasons, you should avoid this book and select something more in line with your political views.

Overall: This book succeeds in the goal of providing a perspective on the five most recent chief justices of the US Supreme Court. While it is obviously not a biography of those individuals, it certainly serves as a valuable perspective on those individuals, as well as some of the other justices on the court. This is why I say it is only half a biography of those individuals. The other half is a memoir of Justice Stevens' own views and disagreements with the chiefs and other member of the Court. I hope that we will hear from Mr. Justice Stevens again in a full memoir, but until then, this book will certainly wet the appetites of lawyers and citizens alike.

If you could sum up Five Chiefs in three words, what would they be?

What other book might you compare Five Chiefs to and why?

The Nine by Jeffery Tobin because it too is a perspective on judicial history.

No. This book is not a novel, it is an historical presentation of the Chiefs and their presiding over judicial decisions. Therefore, I felt listening sometimes required an occasional break because it consisted of legal decisions and history (dates, times).

Enjoyed the book and learned new and interesting things about the supreme court justices.

The chapter numbers were not accurately portayed in the audiobook table of contents. Otherwise an interesting book.

Too much "you should've done it my way."

Anecdotes about the inner workings of the court and its insular membership are always enlightening. The book has a disappointing "what a good man was I" tone. Still, Justice Stevens place in history is safe. The narrator was a bright spot. He probably did not attempt to mimic the Justice, but the timber of his voice was pleasantly familiar and appropriate. It was almost as Stevens might have read it aloud himself.

This book seemed written for other attorneys, somewhat

I liked parts of it in which Stephens discussed the justices personalities and characters and the relation to their decisions. I also enjoyed hearing about the day-to-day process of the court.

Not that kind of book.

Could you see Five Chiefs being made into a movie or a TV series? Who should the stars be?

Not that kind of book.

I imagine attorneys and individuals who work closely with the justice system would find this very interesting. As a

5 chiefs from an interesting perspective

A bit text-bookish but interesting background on the various chiefs as well as some of the workings of the court.

While I found the book interesting there seemed to be a glossing over of the areas I thought would be the main basis of the book. for example the roe v wade decision is only spoken of briefly after discussion of how the coffee breaks were really good.