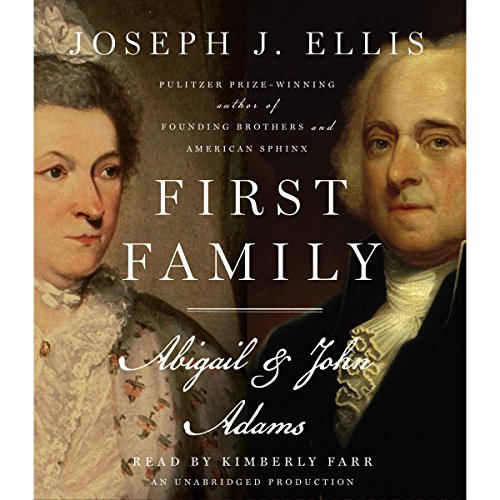 The Pulitzer Prize-winning, best-selling author of Founding Brothers and His Excellency brings America’s preeminent first couple to life in a moving and illuminating narrative that sweeps through the American Revolution and the republic’s tenuous early years.

John and Abigail Adams left an indelible and remarkably preserved portrait of their lives together in their personal correspondence: both Adamses were prolific letter writers (although John conceded that Abigail was clearly the more gifted of the two), and over the years they exchanged more than 1,200 letters. Joseph J. Ellis distills this unprecedented and unsurpassed record to give us an account both intimate and panoramic; part biography, part political history, and part love story.

After they married, the couple were separated nearly as much as they were together. John’s political career took him first to Philadelphia, where he became the boldest advocate for the measures that would lead to the Declaration of Independence. Later he was sent to Paris, where he served as a minister to the court of France alongside Benjamin Franklin. These years apart stressed the Adamses’ union almost beyond what it could bear.

John was elected the nation’s first vice president, but by the time of his reelection, Abigail’s health prevented her from joining him in Philadelphia, the interim capital. She no doubt had further reservations about moving to the swamp on the Potomac when John became president, although this time he persuaded her.

President Adams inherited a weak and bitterly divided country from George Washington. The political situation was perilous at best, and he needed his closest advisor by his side: “I can do nothing,” John told Abigail after his election, “without you.”

In Ellis’s rich and striking new history, John and Abigail’s relationship unfolds in the context of America’s birth as a nation.

I wanted to find out more about Abigail Adams and in the process found out so much more about the times in which she lived, her character, her contribution to the founding of our country, and of course, her relationship to her husband. This book has inspired me to listen to more about our founding fathers and their lives that I am now searching for other books of the people mentioned in the book such as Franklin, Hamilton, Jay, Washington, et al. The best part of the book however, was that it showed all these people as humans and the struggles, risks, loves, foibles, and especially politics - that surprisingly, were no different from our political traumas of today. To think that Franklin's home in Paris had a spy on his staff was astounding. It's a GREAT listen with wonderful narration. It's now one of my favorites and have listened to it over and over to pick up more and more.

I have read so much on John Adams that I didn't think this book would contain much information that I didn't already know, but it does. It is well written and tells you a lot about the Adamses in general, and their marriage in particular. John and Abigail (and John Quincy for that matter) left behind so many letters and writings that scholars still haven't been able to go through them all. Because of this, there is so much information about them that one or two books about them doesn't tell you even many of the basics. This book also shines a light on daily life in their day, which we can only see because the Adamses left behind so many writings. I highly recommend this book, along with the John Adams biography by David McCullough, the Abigail biography by Woody Holton, and the John Quincy biography by Paul Nagel. I have gone through all of these and they all contained a lot of information that I hadn't known before.

Fascinating glimpse into the past...

They had a long marriage, a fruitful partnership, and an an amazing love story. Their letters are truly a treasure, a time capsule worth visiting..

I CANT READ THIS AWFUL CRAP

After reading John Adams I was thrilled to find this book, which seemed like a perfect follow-up. What I got was a 3rd rate, unreadable, unprofessional piece of crap. When David Mccullough makes a point or comes to a conclusion (in John Adams) he tells you how he came to that conclusion and why and gives you the facts rite then and there to back up his point. You get used to this historical professionalism.
Ellis on the other hand goes on telling you John Addams is like this, and feels like that, and so on without anything to back it up. Its a glaring, disconcerting and angering experience to read Ellis after Mccullough. I found it so maddening and infuriating that I couldnt force myself past the first 2 chapters! If your going to have the audacity to try to tell me what someone 200 yrs ago was THINKING you better be able to back that up with something! like a diary entry at least.
Ive read an awful lot of history books and this is definatly one of the worst Ive come across. Bottom line? read McCullough's JOHN ADDAMS and pass this one by.

Remarkable, resilient power couple and family of the 18th century. The relationship between the Adams and Thomas Jefferson... both Abigail and John with Thomas was closer than history books relay.

Not deep, but nice

A good read (listen, rather), not a masterwork, but I enjoyed it. The narrator was a little dramatic, but at least not boring or annoying.

Two of histories interesting couples so very well matched and each brought out the best in the other.

couldn't take the narration, didn't finish because the monotonous tone of it all. the book I'm sure was written well

Engrossing love story of two true Americans who played an integral part in forming America. Abigail was a woman who could slide into 21st century America seamlessly truly a woman well ahead of her time. Great book, great American story and terrific narration!

The subject line says it all. A true disappointment. Not really a story of the lives of the parties, but rather a dull recitation of facts.

I acquired a hitherto non-existent interest in John and Abigail Adams through the TV series, which seems to have been largely based on the First Couple's letters. I loved the TV show (apart from the tricksy annoyng irrelavant camera angles...don't get me started!) but this book drills down in much more detail into a fascinating period of American (and World) politics and society.
As the author points out, the longer John and Abigail were apart, the more information the biographer can glean from their lives. Their loss is indeed our gain.
Mr Ellis manages to walk the line beautifully between John's preoccupations with his position in the National Pantheon (with which he was clearly very obsessed) and Abigail's concerns with domestic dangers and concerns. Three of their 4 children seem to have lived very damaged lives, and John blamed himself for "not being there", but Abigail's support for him and her outspoken,and very advanced political views, mean she was a thinker and activist in her own right.
A fascinating look at a fine couple, with just the right level of not too outrageous speculation to fill in the gaps in the voluminous correspondence.
Well read and presented, I can strongly recommend