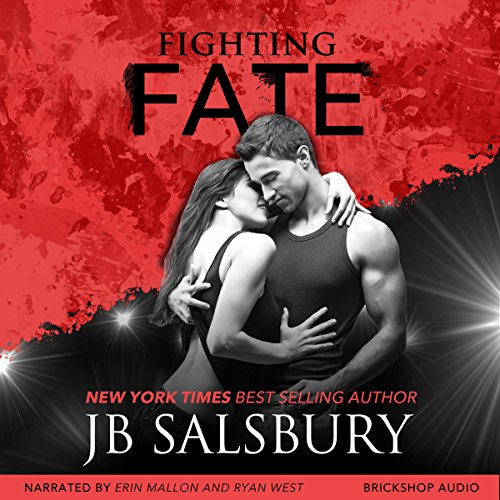 I live to hold her together.

Killian McCreery only has two dreams.

Fight for the UFL.

He's watched her give her time and her body to men who don't deserve to breathe her air. He's waited, and worked hard to become the kind of man she deserves. Hoping one day, when the time is right, he'd get the opportunity to make her happy. After a painful anniversary, he finally gets his chance.

But life has a way of sucker-punching its victims - striking when they least expect it, in the most devastating ways.

But I screwed up. Big time.

Axelle Daniels appears to be the typical college student - parties, hangovers, and men. No one knows that inside she's a mess, and no amount of booze or meaningless relationships have managed to fill the cracks in her heart. But Killian knows. He's been there since the night it all began and has never left her side.

When she wakes up one morning to find the consequences of her actions have caught up to her, even Killian's white-knighthood can't save her now.

Fate is put to the test when, for the first time in their five-year friendship, they no longer have each other to lean on. When he becomes a UFL superstar, she hardly recognizes the man he used to be. And she no longer needs him to hold her together.

With the foundation of their friendship gone, they'll discover that even a love that is meant to be needs to be fought for, and destiny is a choice.

This series NEVER let's me down!

JB Salsbury is an auto download for me. I really enjoy the world she created in the MMA ... and am now enjoying the younger generations. Not only do you get a glimpse into the lives of previous fighters and their wives, you get a fresh story developed around their offspring and new and upcoming fighters. So credit worthy .... the book description gives a very accurate synopsis and I totally loved hearing every word!

Can't do it anymore

Sorry folks, I couldn't get past chapter 5. I love the series, but some of the chapters could have been shortened to make the books shorter but still effective. I am going to keep it in my wish list to listen to later, but for now it's a no go. I love the narrators though.

I LOVE THIS SERIES. REALLY SWEET

Wort the credit. Well I love a V card novel and when the man is saving himself for the loose chick I'm always locked in. The story had such a sweet end and a Three's Company mishaps and misunderstandings it's makes for some fun making up. It's a keeper.

Loved Axel and Killian. There are parts where I wouldn't to knock sense in both of them but it worked out.

Loved Killians story of love, growth, loyalty and devotion! Axel pushes a d pushes but needs and loves. Super enjoyable read!
Love that the whole Fighting gang is in it too! ⭐️⭐️⭐️🤞🏻🤞🏻

So far, this book gave me all the emotions- anger, sadness, aww---. I was amazed that neither of them contacted the other to catch up, then made decisions based on their misconceptions.

Ahhh the Frustrations of Young Love

I read a lot of reviews on Goodreads with mixed feelings about how these two handled themselves and their feelings, especially during their year apart. I tried to keep in mind that these two are young and had troubled upbringings and bad, uncaring role models for the first 16+ years of their lives but I still had moments where I was shaking my head and thinking...'Seriously?" The naivety and cluelessness was a little much sometimes. BUT, with that being said I still really enjoyed their story.

Killian has always been there for Axelle and felt very protective of her since they met at 16 in high school. They've both had strong feelings for each other for 4 years, yes 4 years but neither has ever said anything to the other and always felt they were not good enough for the other. She felt he deserved someone stronger and confident and not so needy and needing to be taken care of (daddy/men issues due to the daddy issues). He felt he just wasn't up to her caliber as he still felt small and nerdy and not worthy of someone as sweet and beautiful as her. At times this became frustrating with the back and forth inner thoughts for 10+ hours of listening.

Axelle finally ends things with her most recent 'hook up' of the past 3 months and when Kill comes to her rescue again that night they FINALLY reveal their true feelings for each other and it is a wonderful, albeit brief, period of happiness for a few days. Life changing things come to light and once again old feelings of insecurities cloud Axelle's mind and she pushes Kill away and demands he take his opportunity to train and fight overseas. Little did she know her pushing him away after he begs her not too was the final straw for him and he goes without telling her and leaves the next morning. Of course the next day she starts rethinking her decision from the night before, but it's too late. They both basically cut each other out of their lives during this entire time. Now while Axelle goes through some heavy stuff and gets bullied by her ex (among other heartbreaking things I won't mention to not spoil things); Kill is trying to focus on his training and first UFL fight and getting bonded with his new training team/fighters and fights all his urges to reach out to anyone in Vegas so he isn't tempted to ask about Axelle. This causes some bad blood a little and creates a lot of mixed signals and feelings. It also doesn't help that one of the new fighters he is bonding with a a beautiful female fighter from France. They get close and pictures and rumors circulate which causes more misinformation at home.

When Kill does come home after a year in England he must decide if he will stay home or return to England and fight there for a 5 year contract. He thought his decision would be to return to England because he thought Axelle had built a new life in Vegas based on situations when he left, but he was totally wrong. When he realizes this he decides he needs her back in his life and now he must decide to stay in Vegas and try and win her back or take her answer of 'No, they've both grown and changed' and move on back to England. This ending kept you guessing up until the end, but loved the outcome.

On a side note, it does briefly go into the relationship with Axelle and her biological father. I had hoped in Blake and Layla's 2nd story that more would develop from that in Axelle's book and they do update you on that aspect. Although it was a disappointing outcome for me as I was hoping it would be a happier outcome for Axelle.

I highly recommend this book! Alex and Killer have a romance that needed to be told. It was perfect from beginning to end.

I've been waiting for so long for Axelle and Killian to get their love story and this audiobook was a great one to listen to. Still set in the world of UFL fighting, the story of Killian's break into the fighting scene during the most traumatic time of Axelle's life was riveting. You really want to pull for this couple to make it through all their difficulties and find a happy ending. Narration was excellent.

I did not want to write a review until I completed the series. I absolutely enjoyed the series up to this point with seven books and I am waiting to see what the next has to offer. They're all written very well with an amazing storyline. I love that each character has a story and how JB Salsburry brings them together. I also enjoy the fact that when he is writing the next book he is taking us back into previous books and storylines because they are all living simultaneously. I can imagine what each character looks like, what their lives were like according to what they are thinking in each and every character is absolutely sexy as He**!! And the sex is out of this world! Although they are romance novels it is not continuous sex but when it is it's absolutely explosive! This is the first series that I have read with this author and I look forward to more books in the future. Also the narration by Aaron Mallon and Ryan West was spot on!!!!!!!