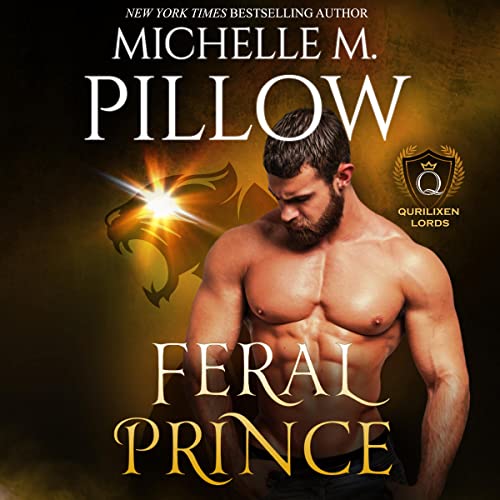 Prince Roderic hates the diplomacy demanded of his position as a cat-shifter royal. As the son of a diplomat, he’s all too familiar with the treaty surrounding the Federation military occupation, Shelter City. The shifters can’t simply ask them to leave, or they’d risk retaliation. Discretion is the key, which includes not getting caught mingling with those under Federation protection. So crossing paths with the beautiful Justina is a mistake waiting to happen. She’s frustrating and rash and doesn’t mind drawing attention to herself. But, as fate would have it, she’s also the one woman he wants to call his own.

For decades they have dealt with lies and deceit, but when the humanoid population under the Federation’s control begins hunting shifters out of desperation, he knows things have gone too far. It’s time to drive the Federation off his planet once and for all, even if that means losing his one chance at true love.

This is book 3 in Pillow's Qurilixen Lords series. A shifter romance read / listen that is sure to delight. I think this can be listened as a stand alone as well. Great action, interesting characters and a captivating storyline make this a thrilling listen. Put all that together with perfect narration by Ferraiuolo and you have a great shifter listen!

This book was given to me for free at my request and I provided this voluntary review.

I so enjoyed this story. The characters and storyline are exciting and fun. The storyline is full of adventure and romance with a little action and lots of interesting characters. The narration was good.

This book was good, the narrator did such an excellent job with the voices. I want to hear or read all of this series. Prince Roderic is a cat shifter and Justina is Cysgodian, when they meet for the first time is was like love at first sight. The banter between was so natural, but Justina is a realist and knows they can't be together. The Federation is supposedly taking care of Justina people but in reality, the Federation is starving and making them sick. There are so many twists and turns in this story. This book left me smiling!

Feral Prince is a wonderfully written sci-fi, fantasy romance and a fantastic addition to the Qurilixen Lords series/Qurilixen World. Michelle M. Pillow is super talented and creative; she has done a fabulous job with the world-building, storyline, and characters. The storyline is engaging, enticing, and steamy, capturing my attention right from the start. Prince Roderic's attraction to Justina was a distraction and totally undeniable. Despite the contrasting personalities, the chemistry was electrifying. Their story was super entertaining, and I really enjoyed it.

The audiobook is very well narrated. Michael Ferraiuolo captures and portrays the nuances of the characters' personalities and emotions, breathing life into Michelle's words. Feral Prince is a very well-written and fantasy romance, one I'm recommending

I don't think this book is a stand alone. You can understand what's going on but you still miss a lot. I really liked most of this book but there were a few times the story felt slow or annoying.

This is a sci-fy approach to the current state of the world. In this world shifters are real, space travel is possible, and earth was ravaged by a deadly virus. it only takes one to fight back.

This is the third book in the Qurilixen Lords Series, a dragon shapeshifter romance, and a spinoff of the amazing Qurilixen World. I like this series! Roderic and Justina's story is intriguing, and entertaining, filled with danger, and action. The world building is captivating. This is a great addition to the series. Michael Ferraiuolo did a great job with the narration.

4.5 Stars - Another Great Addition to the Series

Michelle M. Pillow has done a fantastic job on this third installment to the Qurilixen Lords series. As with each book we have the well written characters that are both endearing and entertaining mixed with a story line that will keep your attention from start to finish. Michael Ferraiuolo did a fantastic job bringing this book to life and made this as enjoyable to listen to as it is to read.

I received an ARC and a copy of the audiobook and am voluntarily leaving my hones review.

I like this series and I think this is my favorite book so far. While the other stories have been unique this one just seemed to pack more of a punch for me. We have heard about the city and how the shifters want to help and are trying on the down low in previous books. This one takes them even further into the city and just puts it front and center. The mind of this author has to be a crazy place because she comes up with the most diverse collections of stories I have ever read. This one doesn’t disappoint and the narration is good.

I love these Qurilixen shifters!!

Feral Prince by Michelle M. Pillow is another amazing addition to this series. Roderick & Justina's story is a perfect mix of funny, action, danger, adventure and steamy shifter romance. I become more addicted to this world with each story I read. Amazing audio narration!
I highly recommend this series!!

I want to start off by saying this has an amazing storyline that enthralled me from the very star hover the real showstopper for me was the brilliant world building. I felt like i was there and loved it.

There is also the narration, it was well paced fitting for the story and each character has fantastic personality.

This book quickly draws you into the storyline and has you rooting for the main characters. Whilst there is a good pace you don't miss out the important details. The calming nature of the planet's shifters and the desire to help the already disadvantaged settlers under an oppressive overseer I can see how the author has created such a range of books around this world. Excellent rebuilding skills.

Prince Roderick enjoys escaping his royal duties. On one such jaunt, he finds Flora and Justina outside Shelter City. When he is told that another shifter is hurt within the city, he ventures into Shelter City, despite it being against the rules, to help. When there he is horrified at the conditions that the people are living under and decides that the Federation must go.
This is another book in the much loved series in the world of Var and Draig. I am loving to see how the world and characters have grown from the first books on the world

Another great story from the Qurilixen world . This book follows Roderic and Justina fighting to end the federations rules and uncover the plot they are carrying out.

When the Qurilixen people offered to shelter what was left of the Cysgodian race. They did not fully realise that the faederation would use it to try and get a ffot hold on their world. Now years later Justina and her race are living in Shelter City. People are starving and sick. When Justina Meets Prince Roderic. She tells him they are not in the same story and to leave her alone.
This is a great read I love the Quirlrxen stories.
The narration is excellent

Another Great Addition to The Series

Action, adventure and romance as Justina and Prince Roderick battle against the corrupt Federation. The characters and the Qurilixen world are so unique and Michelle M Pillow knows how to weave a very entertaining story! Loved it and the fantastic narration of Michael Ferraiuolo who brings the characters alive!