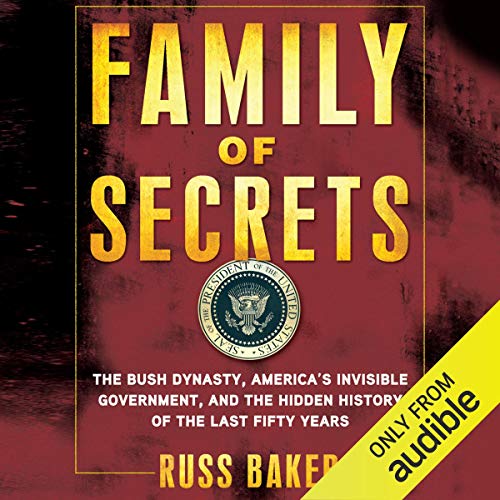 "A tour de force... Family of Secrets has made me rethink even those events I witnessed with my own eyes.” (Dan Rather)
“One of the most important books of the past ten years.” (Gore Vidal)
“Shocking in its disclosures, elegantly crafted, and faultlessly measured in its judgments, Family of Secrets is nothing less than a first historic portrait in full of the Bush dynasty and the era it shaped. From revelation to revelation, insight to insight—from the Kennedy assassination to Watergate to the oil and financial intrigues that lie behind today's headlines—this is a sweeping drama of money and power, unseen forces, and the emblematic triumph of a lineage that sowed national tragedy. Russ Baker’s Family of Secrets is sure to take its place as one of the most startling and influential works of American history and journalism.” (Roger Morris, former senior staff member, National Security Council, and author of Richard Milhous Nixon: The Rise of an American Politician and Partners in Power: The Clintons and Their America)

French philosopher Jean Paul Sartre said that "words are loaded pistols". In the hands of Russ Baker, they are hydrogen bombs. Throughout Family of Secrets, he explodes the myths and lies that powerful forces have perpetrated on the American consciousness. He digs beneath the surface in a form of journalistic archeology to reveal the hidden history of one of America's most powerful families, leaving no stone unturned. Moreover, he names all of his sources and documents the materials he relies on to unmask the hypocrisy behind the myth.

From Prescott Bush's ties to Nazi Germany to Poppy Bush's secret role in the Watergate scandal that ousted Richard Nixon, which was, in fact, a "silent coup", to George W. Bush's deceit in launching the war in Iraq, Russ Baker unmasks the truth with a relentless brilliance unmatched by his peers. His publisher, Bloomsbury, is to be congratulated for its confidence in Russ Baker at a time when most publishers are hedging their bets and looking over their shoulders in acts of self-censorship.

Baker's revelations about George W. Bush's private life is worth the price of the audiobook alone. Here is Bush, forcing himself on a Danish beauty, stripping to the nude, while getting another girlfriend he knocks up an abortion, and then later, as president, opposing abortion and cutting funding for organizations that provide information about birth control. How he managed to get the Danish beauty to go on record, as he does with other key players in Watergate and the Kennedy assassination, is nothing short of astonishing.

He traces the true history of Poppy Bush's career, from his early ties to the CIA he pretended never existed, while declaring himself "out of the loop", to his strange phone call from Dallas to the FBI on the day of Kennedy's assassination, pointing a finger at a suspect who was in fact totally innocent, to his manipulation of Watergate to get rid of Nixon. It's a secret story forced out of the shadows by the powerful documentation of Baker in this tour de force, which will keep you listening in astonishment.

What he discloses is America's War of the Roses, as powerful families fight to the death for ultimate power. The history of Lee Harvey Osward in the world of wealth, power, and intelligence that was Dallas at the time is amazing. The anodyne courses in political science and history at American colleges and universities need very much to inject Family of Secrets into the curriculum so young Americans can be more able to understand what America is truly about. It puts the dots together in a way that makes any further naivety among Americans impossible. What he tells us simply cannot be ignored.

Family of Secrets takes to what Cyril Connolly so aptly described as the "blood crossroads of literature and politics". After Family of Secrets, neither will ever be the same.

Still Relevant, Impossible to Put Down

Russ Baker is the only *real* investigative journalist I know who is working today. See WhoWhatWhy dot com for more of his work. This penetrating and insightful book tracks down obscure people and lost papers to pierce the veil of lies and disinformation surrounding the Bush dynasty's ascent to power. The same or similar techniques have their analogs in the current Obama regime. I was astonished at Baker's investigative prowess, firmly establishing Bush the Elder's long association with the CIA, his work in the anti-Castro movement, and use of Zapata off-shore drilling rigs to train anti-Castro rebels. 41's presence in Dallas on November 22 was no historical coincidence, nor was his involvement (at a discreet distance) in Watergate. This book illustrates the exercise of power by the financial elites better than any I have read. The sheer breadth of Baker's discoveries requires many digressions to link disparate persons and incidents. Listening to the audiobook while driving caused me to lose the thread of his reasoning at a few points in the middle of the book. Oliver Wyman is pretty good at voice imitations and does an excellent job of both 41 and 43. I found this book so interesting and well-written that I have purchased the hardcover version so I can re-read sections and cross-reference at my leisure. Great stuff!

Another resource to learn more about the Powers-that-be. This book goes into perhaps too much detail from an entertainment point of view, but for good reason, I think. The Bush clan has gone to great lengths to conceal its activities and the motives behind them. Thoroughly researched and well documented, we now have another resource for unmasking the demons behind money and power in the US.

I am no Bush fan, but even I couldn't handle all of the unsupported conclusions and inferences about EVERYBODY in this book ... no matter what their role or political persuasion. I couldn't make it past 1973.

The U.S. Presidency isn't a popularity contest, despite what society might want to believe. Getting there requires a concerted effort that isn't paid back in weeks or months. It takes lifetimes; in this case 4-5 Bush family lives worth of quid pro quo favors.

I enjoyed the authors ability to simply report his findings and let readers decide if they wanted to draw their own conclusions. Truth often is stranger than fiction, which I believe is the case here.

Should be read by all Americans

Russ Baker has done an impeccable job detailing the CIA connections of the senior Bush and his and George W's manipulation of government and the nation's resources into a private slush fund for the enrichment of themselves, their oil cronies, and the corporations who underwrite them. In the process, the American people are seen to be disenfranchised, robbed of their freedoms and fruits of their labors. This book is scary stuff and a public service.

Ok, so the JFK assassination part was fascinating. Not necessarily news, but certainly he gives the complete picture.
The book really fell apart for me in the following chapters. As a Libertarian type, I am not surprised by the tales of political intrigue, corruption, and demogoguery, but I was irritated by the authors' obvious leftist slant. The last few chapters seemed repetitive and unobjective.

Well researched and developed. Although I was often feeling pretty disgusted with the information, I always wanted to hear what was next.

Read/listen too it and make up your own mind.

I think this book exposes a couple of inconvenient truths about democracy and power:
- democracy needs powerful backers, not only populous but financial wise too
- democracy might not be as democratic as we would like to believe it to be
- why should the American rise to fame and superpower saga be anything different from the rise of any other "empire" in earlier history?

It is a tough world out there, but we the people must put our faith in our institutuions, political systems and the rule of law. The sad fact seems to be that we cannot expect the people at the helm of these institutions to be so, and the media which is subject to the same rules of economy and short sighted quarterly earnings doesn't seem to be helping much.

I felt shocked, but upon reflection, that was probably because in everyday life you don't like to reflect on the reality of the game.

Where does Family of Secrets rank among all the audiobooks you’ve listened to so far?

I'm easily bored by books in this general genre (politics, even though the topic interests me), but this one kept me interested throughout.

The JFK assassination part is obviously pretty compelling stuff. I also liked how the author documented small episodes (e.g. Ulmer/Zeppo, GHWB and his flying episodes) into his narrative. Helps tell the audible story. I'm about 2/3 of the way through.

Performer was OK, no issues one way or the other.

The author deserves kudos, for the exhaustive research it probably took to write this book. I was just thinking about it while listening. Lots of cross-checking, planning, interviewing, etc. Great job.

Power and privilege in America

This is the one book I would recommend to anyone seeking the how and why the rich continue to run our country with no restraints. A criminal cabal. Sociopathic. Unscrupulous. And all with a good old boy network. Russ Baker is at the top of the mountain of other excellent investigative journalists. The Bush family were the masters of the game. Baker reveals all the way back to the great grandfathers coming to power through the most unsavory methods. Baker very wisely barely addresses the family’s involvement in the 9-11 attack and subsequent theft of our constitutional civil rights. He wanted to get this published and if he dove too deep the Bush power machine would have squashed him. This book should be mandatory reading for all high school seniors to better arm them with how the world of power really works. Well done Mr. Baker.

If even half of this is anyway near the truth it's horrifying. Where is the REAL press and maybe the death of JFK was the death of freedom of speech

The Ruthless Politics Of The USA

This is a very well researched book and I would hate to think how many hours have gone into this work. It’s very interesting having things in context regarding G H W Bush being in Dallas on Nov 22 1963 and it really puts Watergate under a new light, I actually feel sorry for Nixon reading this but, he made a pact with devil and it came back to haunt him. Overall, an excellent book, when Fletcher Prouty talks about the infiltration of the CIA, this book really highlights that there is an octopus reaching every part of American life with its tentacles.