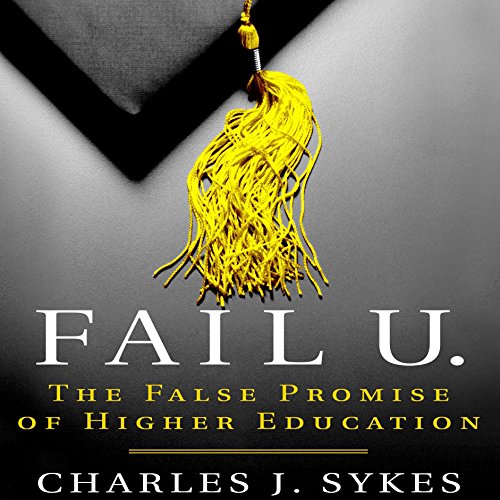 The cost of a college degree has increased by 1,125% since 1978 - four times the rate of inflation. Total student debt is $1.3 trillion. Many private universities charge tuitions ranging from $60-70,000 per year. Nearly 2/3 of all college students must borrow to study, and the average student graduates with more than $30,000 in debt. 53% of college graduates under 25 years old are unemployed or underemployed (working part-time or in low-paying jobs that do not require college degrees). Professors - remember them? They rarely teach undergraduates at many major universities. Seventy-six percent of all university classes are taught by part-time, untenured faculty.

In Fail U., Charles J. Sykes asks, "Is it worth it?" With chapters exploring the staggering costs of a college education, the sharp decline in tenured faculty and teaching loads, the explosion of administrator jobs, the grandiose building plans (gyms, food courts, student recreation centers), and the hysteria surrounding the "epidemic" of campus rapes, "triggers", "micro-aggressions", and other forms of alleged trauma, Fail U. concludes by offering a different vision of higher education - one that is affordable, more productive, and better-suited to meet the needs of a diverse range of students.

Provocative, persuasive, clear-eyed, and even amusing, Fail U. strips the academic emperor of its clothes to reveal the American university system as it really is - and how it must change.

I liked hearing the premise unfold. Universities do have problems, and it was nice to learn all the reasons why they have problems. The explanations for these problems in this book is excellent.

Although, I was disappointed in the ending. There isn't enough "so what" if you know what I mean. Only the last paragraph describe steps of actions for people to actually take. And only the last chapter discussed ideal solution outcomes, but not the steps required to get to these solutions. I wanted more.

I also felt that the usage of quotes and statistics was too often. I'm sure it was to help convince other people that universities do in fact have problems, but having already been convinced, it felt egregiously excessive.

I'd still recommend the book despite my gripes. Everyone pursuing higher education should know the implications of the failing universities.

Great rebuke of the American University

This book does a great job if pointing out the absurdities of the American academic institutions we experience today. Does a great service to the reader by breaking down widespread complex issues challenging the system, then the author explains with excellent simplification backed up with evidence why those issues exist. Definitely recommend reading or listening to this book's perspective regardless of what side of the argument you find yourself on. Extremely informative indeed.

What we need to change in Academia!

An amazing refreshing unmasking of the joke that academia has become and all its ills. Highly recommend the call to action of massive open online courses the help solve this problem.

Is College Worth It?

Overall a good listen to make you think and assess if college is worth the investment. The author clearly goes after the liberal arts world and how upside down some LA degrees are vs their cost. He does not spend enough time balancing on the many technical degrees that command high salaries and drive our thought economy.

Also he needed to spend more time on how to fix the problem. There was plenty of find admiration for the problem but the solution part could have been more expository.