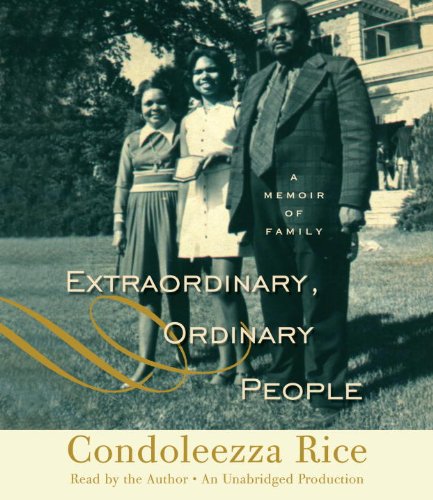 "Looking for a blow-by-blow account of Condoleezza Rice’s years as George W. Bush’s secretary of state? You would do well to find one of the many Rice biographies already on the shelves. In this remarkably clear-eyed and candid autobiography, Rice focuses instead on her fascinating coming-of-age during the stormy civil rights years in Birmingham, Alabama." (Bookpage)

Condoleezza Rice has excelled as a diplomat, political scientist, and concert pianist. Her achievements run the gamut from helping to oversee the collapse of communism in Europe and the decline of the Soviet Union, to working to protect the country in the aftermath of 9-11, to becoming only the second woman - and the first black woman ever -- to serve as Secretary of State.

But until she was 25, she never learned to swim - not because she wouldn't have loved to, but because when she was a little girl in Birmingham, Alabama, Commissioner of Public Safety Bull Connor decided he'd rather shut down the city's pools than give black citizens access.

Throughout the 1950's, Birmingham's black middle class largely succeeded in insulating their children from the most corrosive effects of racism, providing multiple support systems to ensure the next generation would live better than the last. Condoleezza's father, John, a minister and educator, instilled in her a love of sports and politics. Her mother, a teacher, developed Condoleezza’s passion for piano and exposed her to the fine arts. From both, Rice learned the value of faith in the face of hardship and the importance of giving back to the community.

As comfortable describing lighthearted family moments as she is recalling the poignancy of her mother’s cancer battle and the heady challenge of going toe-to-toe with Soviet leaders, Rice holds nothing back in this remarkably candid telling. This is the story of Condoleezza Rice that has never been told, not that of an ultra-accomplished world leader, but of a little girl - and a young woman - trying to find her place in a sometimes hostile world, and of two exceptional parents, and an extended family and community, that made all the difference.

From Michelle Carver - I rarely write reviews but I simply had to with this book. This book is not a political book about her term under President Bush. And you don't need to agree with her politically to find yourself absolutely enthralled by this book. As the title suggests, this is a memoir of her family history, how she was raised, the choices her amazing parents made to help her become who she is today. Besides being a very engaging writer, I thoroughly enjoyed her narration as well. I found myself completely sucked into the book unable to turn it off even late into the night, like a good fiction novel might capture me. She was raised in Birmingham, Alabama during the civil rights movement and her completely thorough description of everyday life as a black family carving out a piece of happiness through those tumultuous times was simply astounding. The details she recalls paint a completely clear picture, I could see what she was describing and it was terrific, every stage of her life fascinating. She's completely amazing and I hope she writes more, I'll definitely read it. Two thumbs up!!!

March without a march

A wonderful story of march of 3 people marching to end segregation without marching in public. An inspiring story about human struggle, focus and determination. Must listen.

A loving tribute to a loving family

This is a very personal and illuminating account of Condoleeza Rice???s childhood in Birmingham, Alabama through her early years as a professor and as Provost at Stanford University. Very well written and memorable stories, particularly from her Birmingham days. Her descriptions of family and church activities reminded me very much of my own upbringing in southern California. In my case there was, however, the very great difference that I was not barred from most of the restaurants in town, nor relegated to back entrances to doctors??? offices, and never threatened by armed bands who were apparently being encouraged by the infamous ???Bull??? Connor and the local police.

A very worthwhile read for anyone with an interest in Condoleeza Rice or in gaining a better understanding of racial segregation as it existed in the South before the Civil Rights Act of 1964.

Because Ms. Rice is extraordinary, the story of her parents and family is extraordinary. It gave me great pleasure to see how the sacrifice and foundational love of her family made Condoleezza Rice a reality in this world.

Although we are quite different our families were very much the same. Many of her stories caused me to reflect on my parents (now deceased) and helped me to recognize how extraordinary the ordinary people in my own life have been.

Toward the end, I hesitated beginning a chapter as I thought it would be the final chapter. I was relieved each time when a new chapter began. Unfortunately, there IS a final chapter. I loved listening to Condoleezza talk about Condoleezza! I didn't want my listening experience to end. She is definitely extraordinary, herself.

A truly amazing parents. Very interesting to hear of her experiences growing up as a young black girl in the south.

This is an excellent book that details the early life and inspiration to the later successes of Condoleezza Rice. Her parents are immortalized in it's pages. One can see the love, commitment and passion that they had for their daughter. A beautiful book that speaks to the soul of every child fortunate enough to have parents that loved them beyond measure.

I love Extraordinary, Ordinary People: A Memoir of Family, by Condoleezza Rice, because it speaks to me. My parents grew up in the South, but my family has none of the experiences that most people think of when they think of the southern living in the 50s. There are three reasons for this:

1. My grandparents were educated .My grandmother was a midwife who worked in the local community. I don’t know what my grandfather did for a living but I know he worked outside of the home.

2. My grandparents owned their land. They farmed and often employed people in the community to help in the fields.
3. My grandparents raised their children away from racism and segregation. They had a big family so they are at home and a avoided issues like “white only” restrooms when raising their kids. My mother and her siblings went to the private family school so there was no segregation on that front either. My grandparents had their own car so there was never an occasion to sit at the back of the bus.

This means that my mom grew up in middle to upper middle class home. That is a stark contrast from what most people think of when they think of the deep south in the 1950s. The standard portrayal usually involves uneducated black people in the service community. People tend to ignore the stories of people who do not fit that image. The Help is an example of this type of “love to adore the servant black character” fiction and it is disgusting when a book like that gets such rave reviews for reinforcing negative stereotypes by having boring characters filling roles that we have seen over and over again. I often wonder if the people who give books like this great review are nursing some desire to return to a world like that.
Reading Condi’s book felt like coming home. It was the first time that I read a book about a black family in the south that resonated with me. Her stories are similar to my stories. I enjoyed reading about her journey because it was more similar to my journey

Dr. Rice is a wonderful example of what can happen when a husband and wife sacrifice and put God first. It has been said to never judge a person until you have walked in their shoes. I have always admired Dr. Rice and truly thank her for sharing insight regarding her faith, discipline and academic career. I hope to meet her one day. T. Robinson

Too little Extraordinary, too much ordinary

If you like her wikipedia entry, then this book is for you. If however, you looked at the cover presented and expected an account of what it was like to grow up in the deep South, of what it means to be an American who grew up in segregation, of what the country means to you having experienced both the worst and the best, choose another book.

Would you ever listen to anything by Condoleezza Rice again?

Absolutely, if it told her story rather than presented a timeline of her life

As my writing teacher used to say 'Show me, don't tell me'

The beginning of the book, where Rice talks abotu growing up in Birmingham is fascinating. It is very personal.