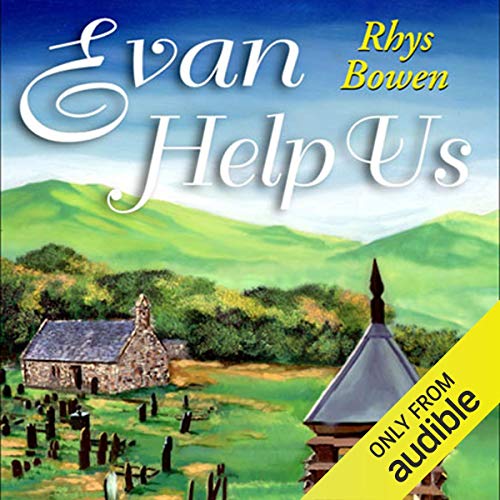 Evan Evans is settling into his role as Constable of Llanfair, a small town nestled in the mountains of North Wales. Here, he has been a mediator of the minor disputes of the locals, between competing ministers, country merchants, and seemingly every Welch eccentric throughout the region. But an unusual series of events brings unseen hostilities to light, and Evan realizes just how deep the townsfolk's passions and hostilities lie.

While the village of Llanfair has always been at odds with the neighboring town of Beddgelert, an intriguing archeological find in the nearby hills brings that rivalry to dangerous extremes, and creates a circus of local enthusiasm and gossip. The circus quickly turns deadly, however, when Llanfair's prodigal son, Ted Morgan, announces plans to erect an amusement park over the site's excavation. Soon, Constable Evans is drawn into a whirl of cultural pride, deception, and greed, and while he's at it uncovers the town's undaunted ambition - to earn the right to the longest name in the world.

With the warmth, charm, and wry sense of humor that won listeners' hearts in Evans Above, Rhys Bowen offers a delightful new installment to an already cherished mystery series: Evan Help Us.

The second in the series finds Evans the Law investigating the death of the Colonel who appears to have accidentally drowned after a night at the pub with the lads, as they say in Wales . . . but Evans does not believe it to be an accident, as the well-liked English Colonel, a visitor from London, always took the same walk home from the pub . . . on another front, long lost native son, Ted Morgan has returned to town, after inheriting his father's land, and is planning an amusement park smack-dab in the middle of their quiet little village, stirring up the ire of Evans the Meat . . . and thirdly three women are vying for the attention of the handsome, strapping young Evan Evans the Constable, leaving him both flattered and flustered, undecided as to whether or not he's ready for a serious relationship . . . I really enjoy the cozy town of Llanfair and the folks who live and work there. I feel for them when the Colonel discovers what he believes to be ancient ruins which threatens to put Llanfair on the map, so to speak . . . when most of them what nothing more than for life to continue as it is . . . So with the pot well stirred, Evans the Law has his hands full, when, just as he suspected, it is determined that the Colonel was indeed murdered . . . and before long there is another murder . . . are they connected? And how?

Not really a mystery in my opinion

I really do enjoy these books and may continue to read them. The characters are interesting and the setting is different, The down side is the mystery.

Evan Evans is a local constable in Wales. He is happy with his life and much in demand as a potential husband by several women and their families. He enjoys hiking the mountains and walking his beat through the peaceful town.

An elderly gentleman is killed one night on his way home from the local pub, a few days later another man is shot and killed. Are they connected? Who had a motive to kill either? For over 6 hours there is little info about who could have done the murders, except one character who is a obvious suspect and just as clearly innocent.

Then in the last two chapters, the entire story is wrapped up with information that wasn't even hinted at during the story. I like trying to solve mysteries as I read them. This one however gave no information about the victims to figure out who did it.

Great story! My husband and I listened to this book when we ate our breakfast. This was a great way to start our day because we could think about what would happen next, and talk about the plot.
This is a clean story, nothing vulgar in language or scenes.
We are ready to share listening to the next book!
The narrator does a fantastic job.

Great pace, kept me interested and guessing the entire way. I've been waiting for the audios to come out for this series for a while now and rewarded for my patience, definitely not a disappointment. Great job, Ms. Bowen!

Book 1 didn’t thrill me that much, I preferred Book 2 much more (even though I did find there were some annoying holes in the plot) so I am going to assume that this upwards trend will continue into Book 3 and by then I will be hooked on another great series.

I think like with any series, you just need a little time to get to know the characters and their quirks and then after a few installments you find yourself loving them all because they are so familiar to you.

Of course this is all based on the premise that the books are actually good and worth reading in the first place! I think these are.

This series gets an automatic pass from me (so far) since it’s by Rhys Bowen. I love love lover her Georgie and Molly series, so how can the Evans series not be great?

A Welsh tale in a Welsh town.

Evan help us is a slow scenic drive through the Welsh countryside on a bright Sunday afternoon. Very slow and sedate trip through a very typical Welsh town that is interrupted by a few grizzly murders, just enough to prevent things from becoming too dull in a sleepy little village. I often pictured myself traveling along a narrow windy lane while listening to this slow paced murder mystery and enjoying the views of snow-capped mountains and green valleys. The book is very well written and the characters charming and quirky, hardly the backdrop for a tense, edge-of-your-seat thrill ride hunting for a multiple murderer.
I enjoyed the book but found myself fighting to stay awake as the narrator, who was deliciously Welsh, lulled me into a peaceful sleep.
People who would enjoy this book: Neat-nicks, who like their murders as clean as their floors.
People who wouldn't like this book: Action junkies and anyone who drives over 45 on the highway.
AUDIBLE 20 REVIEW SWEEPSTAKES ENTRY

What did you love best about Evan Help Us?

Another great story from Rhys Bowen. This was the first in the "Evan" series I have listened to and it was great. it had a well created plot. Wonderful characters with clues into their lives from previous stories so I understood what was going on with out wishing I had listened to the other books first. I did not guess "who did it"! I love how her descriptions work well with my imagination and I could picture the village, scenery and characters.

What other book might you compare Evan Help Us to and why?

I love Rhys Bowen's other stories also - Molly Murphy series, the Royal spyness series and recently Farleigh's Field. I am a fan of good plots and detective / crime stories.

What does Roger Clark bring to the story that you wouldn’t experience if you just read the book?

I found it hard to stop listening! totally engrossing

Rys is one of my favorite authors. I couldn't stop listening to this one. Stayed up way too late just so I could finish it

Better than I remembered!

I read this series years ago and for a long time Audible only had one of the books available. Finally, they are catching up and adding other books in the series. This is a great series with interesting characters and plenty of twists and turns in the mystery. The descriptions of Wales and the village life make me want to visit. I really enjoyed the narrator and was delighted to find the story to be even better than I remembered it to be.

What a great story!

This was a fun listen. The performance was excellent and the ending was a surprise. You cared about the characters and the pace was good.

When's the next one?

This is the 2nd time I've listened to this. I love Evan Evans stories and am impatiently waiting for them all to be released. Roger Clark's voice is wonderful - he's a bit rubbish at English and what I guess was Scottish accents, but that makes it all the more real for me. He has three switch between voices and narration down pat - I can't get this right when I'm reading to my niece!

Highly recommended, with a story that keeps us hooked till the end, but that's Rhys Bowen for you!

This story is an easy listen. Love the fact it’s set in Wales. It’s not madly exciting but it’s a bit of fun. Might read another ......not sure