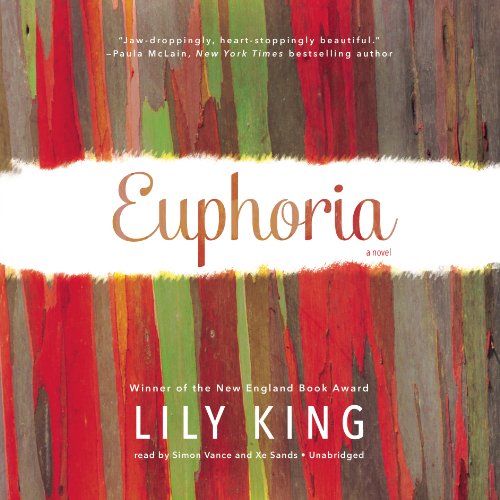 From New England Book Award winner Lily King comes a breathtaking novel about three young anthropologists of the '30s caught in a passionate love triangle that threatens their bonds, their careers, and ultimately, their lives.

English anthropologist Andrew Bankson has been alone in the field for several years, studying the Kiona river tribe in the territory of New Guinea. Haunted by the memory of his brothers' deaths and increasingly frustrated and isolated by his research, Bankson is on the verge of suicide when a chance encounter with colleagues, the controversial Nell Stone and her wry and mercurial Australian husband, Fen, pulls him back from the brink. Nell and Fen have just fled the bloodthirsty Mumbanyo and, in spite of Nell's poor health, are hungry for a new discovery. When Bankson finds them a new tribe nearby - the artistic, female-dominated Tam - he ignites an intellectual and romantic firestorm between the three of them that burns out of anyone's control.

Set between two World Wars and inspired by events in the life of revolutionary anthropologist Margaret Mead, Euphoria is an enthralling story of passion, possession, exploration, and sacrifice fromaccomplished author Lily King.

The majority of the story was sad, especially the ending. Don’t care for books where women are abused by their husbands.

Euphoria presents a classic love triangle among three anthropologists in New Guinea between the world wars. The main charcter is Nell Stone, modeled after Margaret Mead, a free-thinking, insightful, deeply empathetic student of native cultures. Her husband Fen is her opposite, cynical, greedy and dismissive of local sentiments. Between them comes Bankson, the narrator, looking back years later on their brief time together in a small village, trying to control their lusts but not their ambitions. The story is well told, more absorbing and suspenseful as the book progresses. The author, like Nell, has a quick feel for other characters. Minor characters are well drawn with a few telling details. You especially feel for several of the villagers whose lives are changed by their observers.

The audiobook has a serious flaw, namely, the drab narration by Simon Vance. Bankson should be an energetic, passionate, vibrant young force of nature, despite his failed suicide attempt at the novel's start. Instead, Vance reads as a depressed and weary old man. This drains the novel of much of its excitement. Xe Sands, reading as Nell Stone, is far better, with the right enthusiasm and wonder in her voice. Overall, however, this was an excellent book.

A beautifully-written and compelling book about fascinating people. The anthropologists are as interesting as the tribes they are studying. I could have gone on listening to this for quite a while longer and am sorry it's over. I completely disagree with the reviewers who panned Simon Vance. No, his reading of Bankson isn't euphoric, but neither is Bankson's character. So much of what is going on in the book is in the contrast between his approach and that of Nell and Fen, and Simon Vance and Xe Sands (whom I also loved) nailed this aspect. Great book, great narration all around. I loved it.

Since when has domestic violence been sexy?

A story about domestic violence, a whinny friend and giving cigarettes to the natives for information. The writing was good. The narration is OK, but there are some rough edit locations.

This is one clever author. King creates a claustrophobic, small world in the vast tropical miasma of New Guinea. Andrew Bangston, whose loneliness is almost a fourth character in itself; brilliant and driven Nell Stone; Nell's lout of a husband Fen - these anthropologists are really the only three characters as the rest are set pieces and background.

King does a great job capturing the arrogance and indeed racism of early 20th C anthropologists - you do wonder what their subjects thought when these frail people plopped themselves into a village that had been peacefully minding its own business. Each anthropologists' approach is shaped by their own demons and biases, and the relationship between the three is glued together by Bangston's desparate loneliness.

The ending snuck up on me, which I appreciated. King had a way of making the reader think the book was about one thing, when it was really about something else.

This was one of those rare books that I couldn't put down from the minute I started it and couldn't stop reading till I had finished three days later. As a temperamental reader, I seldom find books these days that enchant me right from the first page and never let me drift off. The story was fantastic, the plot never rested, but the characters were fully drawn and kept you deeply engaged in their fate and in the things for which they were passionate - in this case their anthropological work.

It is a story about a character inspired by Margaret Mead and it follows her into tribal settings along with her very new husband and his very aggressive personality, jealousy and inability to imagine his life as her spouse rather than vice versa. A third anthropologist encounters them during their Sepic river studies and the trio's balance is upset by the tensions. Tragedy ensues. But how you get there is an intricate and fascinating path through tribal studies and the ecstasy, the euphoria, of thinking you are coming to understand some part of human nature up close.

The book was an intellectual adventure in addition to a well-told tale.

What is unusual for me is that I was not so happy with the audio version, despite the male reader, Simon Vance who is one of my favorite readers of all time - I kid you not I once actually wrote him 'fan mail' to let him know how much I had enjoyed his versions of the Anthony Trollope Barsetshire novels. Yet his reading didn't click for me in this narration, and I especially didn't enjoy having two different narrators - a male for the Bankson narration in the book and a female for the Nell Stone narration. It also wasn't consistent, since each narrator then had to read parts of all the characters in that section of the book - so you had two VERY different characterizations of the Australian accent for Fen.

Since I had purchased both the Kindle and Audible versions, I just finished the book entirely on the Kindle, although I had planned to alternate between the two. I think it's fair to conclude I prefer one continuous narrator for a novel and will think about that issue the next time I am presented with a choice.

Highly recommended novel whichever way you choose to hear it or read it - I look forward to reading Lily King's earlier novels.

What a story! Lily Tuck is a terrific writer. First book of hers for me but I'll be back for more. Narrators were terrific as well though I disagree somewhat with the way Xe Sands interpreted Nell. But only a minor irritant. Really great listening experience.

What made the experience of listening to Euphoria the most enjoyable?

What was one of the most memorable moments of Euphoria?

Which character – as performed by Simon Vance and Xe Sands – was your favorite?

If you could rename Euphoria, what would you call it?

This book deals with people at the cusp of anthropology as a science. Anthropologists moved from measuring Indigenous people's heads and watching from a distance to moving into the village and inserting one's self into the culture to understand it. While there are issues with both approaches, the cultural view is far more informative.
The readers are fantastic - the comment made elsewhere on this page about Simon Vance is way off- he's great and always a great voice of his character.
This is a great read!

The story you think you know is never the real one

This is such a powerful book. A breathtaking tale of three Anthropologists studying tribes in New Guinea, in the 1930’s, it’s history when there were still discoveries made on this planet. Based loosely on the lives of Margaret Mead and her second and third husband, the love triangle develops into an intense character study that will have you feeling for each person at more than one point. The underlying tension that the author builds within the story is outstanding. I also liked how she was able to use small antidotes and scenes to paint whole pictures. The short sex scene in the first chapter just lays out every single thing you need to know about this couple’s marriage. What an extremely talented author.

I thought the audiobook was just a perfect means to tell this story. I enjoyed both of the narrators personally.

I can’t imagine a better, more surprising ending. I re-listened to the last several chapters several times because I was just so surprised by it.

If you were on MY Christmas list - you would alllll be getting this book.

Love triangle among anthropologists in the Pacific

This is a terrific book and would be enjoyed by those who want to be transported to another setting in another era as well as those concerned about knowledge generation and management, research ethics, and international development.

Beautifully written, poignant and redolent with early 20th century colonialism and paternalism, we also learn of the competition between junior academics, their 'ownership' of tribes and contact with Indigenous communities, and ethical guidelines maintained and broken.

Strongly recommended for those looking for an interesting novel (in part based on Margaret Mead) at the interface of development and the Pacific, 'modernity' and tradition, agency and dependancy...

I found this book well paced, intriguing and certainly easy to follow, despite some other reviews saying it’s not. The environment is vividly depicted, the characters are fascinating, with the villain of the piece particularly heinous and the ultimate fate of another protagonist (no spoilers) a sad reminder of the fact that cruelty and monstrous behaviour exists at all levels of human interaction, even among so-called “civilised” people, who in this case use their privilege to judge others.

Persevered with it, sadly not to my liking

I really wanted to enjoy it but the different points of view and style of writing meant that it took time to know which character was talking.

Beautifully written with an engaging love story and nuanced characters. I found it difficult that the main characters see them selves as better than their contemporaries but still using their privilege to barge their way in to local people's lives. The book doesn't try and rewrite history by pretending that anthropologists of that time were more enlightened than they actually were. But I think it could have done more to give 'the natives' voices and personhood. It is the sort of book you could discuss for hours.

Phenomenal writing. I really enjoyed the first chapter and loved the whole book quickly thereafter. I recommend it to everyone I meet.

I persevered with it

the story was well read but i struggled to remain interested. I persevered with it.

This is better than the initial impression that the blurb gave me. I thought it was going to be a tad salacious but it wasn’t. An interesting look into early anthropological studies and approaches taken and differing views held, brought together through the three anthropologists. The examination of their personal lives, including pivotal childhood experiences making for thoughtful cultural juxtapositions.

An Intelligent, captivating and insightful book!

Loved this story. The narration was really quite wonderful and brought the book to life.