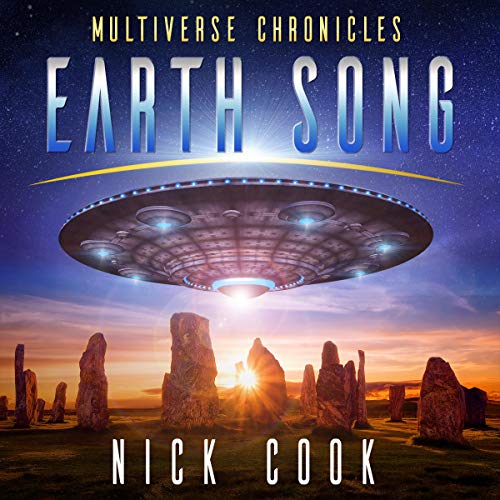 "Get ready, Mulder and Scully, there’s a new alien hunter in town and she’s called Lauren Stelleck. This is what a cracking sci-fi thriller should be like. Earth Song grabs hold of you and doesn’t let go until the final page." (Barry Hutchinson, author of the Space Team series)

"Made me fall in love with sci-fi all over again." (Alexander Gordon Smith, author of The Fury and the Escape from Furnace series)

“We are not alone. First contact has already happened. I wanted to tell the world the truth and now they want to kill me.”

Lauren didn’t ask to be a hero. But one night during the graveyard shift at Jodrell Bank, she captured an astonishing fast radio burst from an alien race. And just like that, the fate of the world was thrust into her hands.

Now she’s put everything on the line to blow open the conspiracy of silence surrounding UFOs.

She's on the run from MI5 and a secret organization determined to stop her. After a year of dead ends and a heart-breaking personal tragedy, she’s on the verge of being forced to abandon her personal crusade.

But then alerts erupt across the international UFO forums. What are the crystal runic symbols that have started to appear all over the Isles of Orkney? Could they mean that the alien intelligence Lauren previously encountered is once again reaching out to humanity?

With a ruthless enemy closing in fast, Lauren teams up with Jack Harper, an archaeologist and UFO sceptic, in a last desperate attempt to unearth the truth. Together, can they discover the source of the strange activity on Orkney? If they fail, humanity will stand alone to face a threat coming for us from the stars.

Time is running out for the survival of all life on Earth.

Follow humanity's epic struggle to survive across parallel universes in the Multiverse Chronicles, a series of interlinked stories that include the Earth Song series, its prequel The Signal, and also the Fractured Light trilogy.

slow slow slow. kept waiting for something exciting to happen with aliens but more than half way through it was still going nowhere that I cared to follow.

loved it. the setting and topic had me hooked from the start. an eclectic group are brought together to right wrong and save the world. looks like a great series. I hope audible adds the whole seriex.

Loved listening to Earth Song as much as I loved reading it. Great job by Chloe De Burgh! Now we just need a movie!

I don't think I've had this much fun since DaVinchi Code -- and sci-fi to boot! The only thing I didn't like about this book was the ending -- not the content but the principal that it ended. I want to hear where this story leads to next....

Really enjoyed this! Had been looking for something new to get into and this ticked all of my boxes - cracking characters, gripping stakes and fresh sci-fi adventure. Found it really easy to visualise and felt like a movie! Can't wait to see what happens in the next instalments and also enjoyed the prequel. A great new writer to get into!

I absolutely LOVED this when I read it in paperback and couldn't resist revisiting it in audio. If anything, it was even better second time around. Brilliantly conceived and written, full of fantastic ideas and thrilling action, the whole thing is brought to life superbly by an accomplished narrator who completely nails it with her understated but compelling voice work. Awesome stuff!

Hackneyed, clichéd writing. Mills and Boon would reject this. Even the narrator seemed bored. Appalling.

Well narrated story that rattled along despite the alt universe and dwindling tension towards the end.