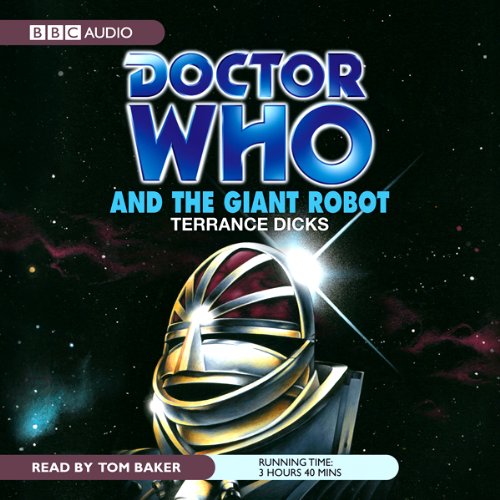 "They're well-written books: adventure stories of course, but with some thought...the creation of the character of the Doctor had a touch of genius about it." ( Westminster Press)

"Look, Brigadier! It's growing!" screamed Sarah. The Brigadier stared in amazement as the Robot began to grow...and grow...swelling to the size of a giant! Slowly the metal colossus, casting its enormous shadow upon the surrounding trees and buildings, began to stride towards the Brigadier. A giant metal hand reached down to grasp him.

Can Doctor Who defeat the evil forces controlling the Robot before they execute their plans to blackmail or destroy the world?

Doctor Who and the Giant Robotに寄せられたリスナーの声

Doctor Who and the Giant Robot was an excellently written and well performed audiobook. If you like a good, classic Doctor Who story, this is the ONE for you! The narrator is a very good reader with a very calming voice that really lets you fall into the story. I was sad when it ended! I would definitely recomend this book to anyone that likes Doctor Who. Also, if you are curious about Doctor Who and what to know what it's like, this would be an excellent story to begin with. Again, this is a very classic story in true Tom Baker (The actor that played the Doctor as well as narrated this story) form.

What a great retelling!!!!

what a great retelling telling of the 4th doctors first adventure red by the great Tom Baker. def you love Dr Who and you love the 4th Dr played by Tom Baker this is the first audio book you should hear.

Superb! Thanks for your great reading, Mr. Baker!

Just hearing Tom Baker's voice narrate the story made it come alive. And, what a pleasant surprise to hear the musical interludes and sound effects dabbled tastefully throughout! Well done! Thank you for the experience!

narration excellent
holds attention and passes a very enjoyable couple of hours. recommend for anyone