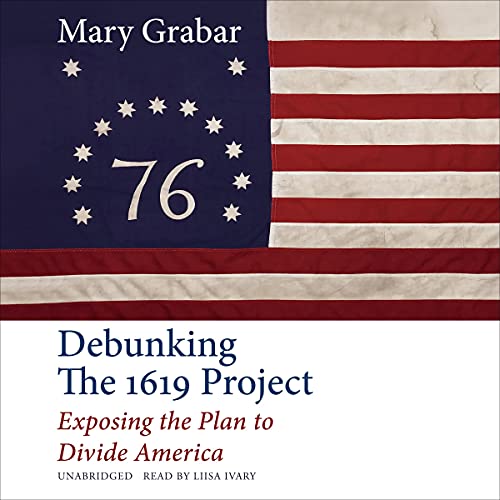 According the New York Times’ “1619 Project”, America was not founded in 1776, with a declaration of freedom and independence, but in 1619 with the introduction of African slavery into the New World. Ever since then, the “1619 Project” argues, American history has been one long sordid tale of systemic racism.

Celebrated historians have debunked this, more than 200 years of American literature disproves it, parents know it to be false, and yet it is being promoted across America as an integral part of grade school curricula and unquestionable orthodoxy on college campuses.

The “1619 Project” is not just bad history, it is a danger to our national life, replacing the idea, goal, and reality of American unity with race-based obsessions that we have seen play out in violence, riots, and the destruction of American monuments - not to mention the wholesale rewriting of America’s historical and cultural past.

In her new book, Debunking the 1619 Project, scholar Mary Grabar, shows, in dramatic fashion, just how full of flat-out lies, distortions, and noxious propaganda the “1619 Project” really is. It is essential listening for every concerned parent, citizen, school board member, and policymaker.

My likes of this book is I was informed of some information I have never received before, all information received is good weather if you believe it or not.
My dislikes the fact that the author takes personal criticism on the author of The 1619 project personal appearance that has nothing to do with anything. secondly the reason the 1619 project was written is because America as always try to downplay the destruction and the great harm that's slavery has done to black people in America.
I believe the 1619 project is a very important piece of literature that is necessary for black people in America not to make them dislike other races but for the up building of themselves. if other races choose to be offended by what is evidently true that is something they need to deal with within themselves. in other words the debunking of the 1619 project is the exact reason why we can never move forward as a nation. they will never take ownership only find reason to blame and justify their actions. I applaud the Arthur of the 1619 project Hannah Nicole and all of those who participated and may the healing of this nation begin at this moment thank you.

An easy argument crippled by sensationalism

1619, and all it’s peripheral nonsense, takes only the slightest bit of remedial education to put back in its place, the trash bin.

However, this book is a slog of sensationalized “she did what!?”. The reading sounds more like a gossip column than an actual argument against 1619.

Where to even start?

I am not sure that the author of the book meant for it to sound as angry and sarcastic as the narrator, but wow. Once you get past that part, you get to hear that slavery wasn’t all that bad. It could have been worse because other countries had human sacrifices. In addition to that, we weren’t the only country doing it so I guess two wrongs make a right? Wow, just wow.

i dont understand how debunking is only sayimg it, without facts? I mean to acknowledge that something happened and say there is an emphasis on the fact, is debunking the fact? I am going to finish this book because, I started it, but three hours in and im made i used the credit so far.... I will be back when I finish.....
to be cont.......

Mary Grabar goes way beyond just Debunking the 1619 Project. She finishes the book by demolishing the tenets of the 1619 Project using names, dates and reviews of actual real historians.

It's Grabar's volume of information coming down like a sledgehammer on The 1619 Project's baseless accusations that sets it apart from other books.

Grabar leaves Hannah-Jones no quarter, leaving the polemicist up to her chin in debunked lies and racist rhetoric.

Unlike the dishonest and tendentious 1619 Project, this book is impressive in the depth and breadth of its scholarship. More than a simple debunking of the 1619 Project, it provides a fascinating picture of the history of slavery and freedom in the United States. Perhaps the most surprising thing I learned was that a significant number of free blacks in the American South were themselves slave owners. Highly recommended.

Too petty to fully enjoy. It provides historical information that would’ve been good to have included in the 1619 book. Though I recognize that neither this nor 1619 are intended to be complete historical narratives. Both books focus on the parts of American history that support the authors’ opinions, and in that regard, this book shouldn’t be esteemed as a great rebuttal.

The first few chapters could have been 1/4 the length and a lot less snarky. The narrator makes it seem even snarkier with her nasal whine. But once it gets to the actual debunking, the book actually gets informative and useful. I appreciate the last 3/4 of the book. I really could have done without the narrator’s voice though. I would have preferred Siri or Alexa over Liisa.

Grabar dispels the litany of unfounded and offensive myths of our nation’s founding and founders that have become the new normal. However, she is honest and pointed in her denouncing of slavery, irrespective of when, where, by whom, and of whom. My Great Grandfather had slaves, and I grew up hating for no good reason. I have confronted my sin and rejected my horrible beliefs. Nonetheless, this writing has opened my eyes to the fact of world-wide slavery and why I can be proud of my country and fellow citizens.

I truly appreciate truth being spilled throughout this book. While debunking and exposing the Hannah-Jones 1619 project. Everyone should read this book. Especially high school students considering higher learning.

Thanks to Bishop E.W. Jackson for recommending this book on the air waves and having the author Mary Grabar as your guess.

Educational, with a lot of examples.

The beginning was hard to get through due to the passionate delivery of the narrator. A more objective tone would have benefited the content more. After the first chapter however the delivery got to a tone that I could easily listen to.
The book itself objectively looks through Nicole Hanna Jones's errors, and willful ignorance when crafting the 1619 project, and delivers plenty of great examples, and explanations supporting the validity of the author's concerns. Through putting chapters of history into the appropriate context and providing the details necessary for a clearer understanding, it successfully reveals not only the truth, but the negative intent behind the project, and how it is used to drive current narratives to undermine the social integrity of the US and prevent the formation of a social consensus around key historical events.
Highly recommended to anyone willing to look further than the scapegoating and namecalling that has now become a staple in global media, and look at history in a way that allows humanity to actually learn from it's mistakes.