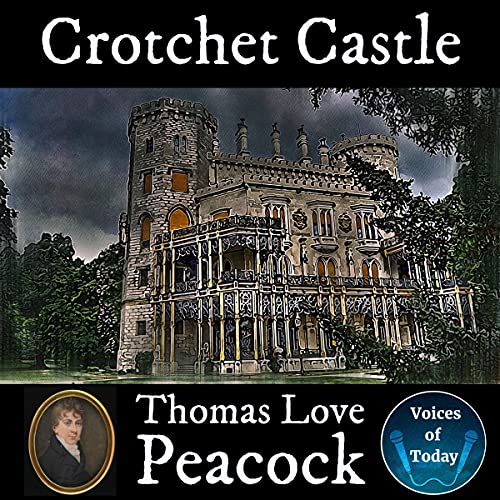 Presented by Voices of Today

Also featuring the voices of Alan Weyman, Denis Daly, and Rachel May.

Music for songs composed and arranged by Alan Weyman.

Crotchet Castle, the sixth novel by English man of letters, Thomas Love Peacock, was first published in 1831 and is considered one of his most polished productions. The structure of the plot is similar to that of his earlier novels, Headlong Hall, Melincourt, and Nightmare Abbey.

Ebenezer Mac Crotchet, Esq., who has a mixed Scottish and Jewish parentage, has inherited some sterling qualities but is determined to destroy, as much as possible, all vestiges of his extraction. His villa has become a resort for literary and scientific men, with the result that the author easily provides himself with enough characters to introduce his favourite remarks on a wide range of topics, including Ancient Greek, transcendentalism, contagion, education, political economy, and meteorology.

The romantic interest is provided by Lady Clarinda Bossnowl and Susannah Touchandgo, who are both in search of a suitable spouse.  This former is intended to marry the young Crotchet, who is an entrepreneur with a promising future. Miss Touchandgo displays a very romantic disposition, and having met with some disappointment in life, is at first unwilling to be wooed, but is pursued with great dedication by the idealistic Mr. Chainmail.

The plot is first laid in London. The whole party then proceeds up the Thames, as Peacock had himself done in 1809 and 1815, and in the course of which references are made to locations like Godstow and Lechlade, which he had previously described in poetry. The tale reaches its satisfactory conclusion among the Snowdonian regions, where its author was as much at home as in a metropolitan setting.