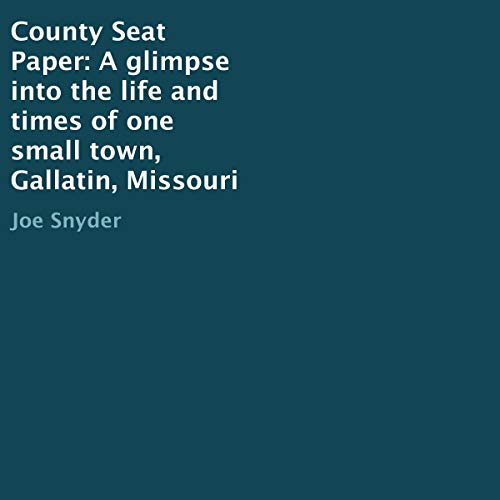 In this book, my late father tells of life from the perspective of an editor who lived among and loved the people of a small town in Northwest Missouri, while he also covered events from joy, through heartbreak, and tragedy.

The book includes heartwarming and heart-wrenching vignettes relaying the hard work people in the community pursued, as well as profiles of people ranging from someone rumored to be the town "lady of the night", to the shenanigans of the bank-robbing James brothers, to a couple of early-day feminists who made names for themselves from their Gallatin roots.

There's the story of Raymond Ridlen who lived in a half-cave, half-house he built himself near the river and was well-known for his homemade horseradish. There's the tale of John Wood, Sr., who bought river land and spent a lot of time looking for a locomotive rumored to have buried in a 1909 flood. He talks about the circus-like atmosphere surrounding the last public hangings in Missouri held in his town in the late 1880s.

You'll also learn about "Uncle Wes" Robertson, the only Missouri newspaperman ever shot and killed in the line of duty. Turning to more modern times, the book tells of the editor's 15-year battle to win what he hoped would be an economic boon for the area, only to give up in defeat and frustration and of his deep sadness when a young politician who, perhaps, could have reached the highest office in the land was killed, along with his family, in an election night plane crash.

The book covers the Amish community near Gallatin, extraordinary community residents and life from the perspective of a caring editor who lived through the events of the times. The book offers a glimpse into rural life of the 1950s through the 1990s with a message that the goodness of people can transcend even the darkest of times, and life in small-town USA is rarely dull.