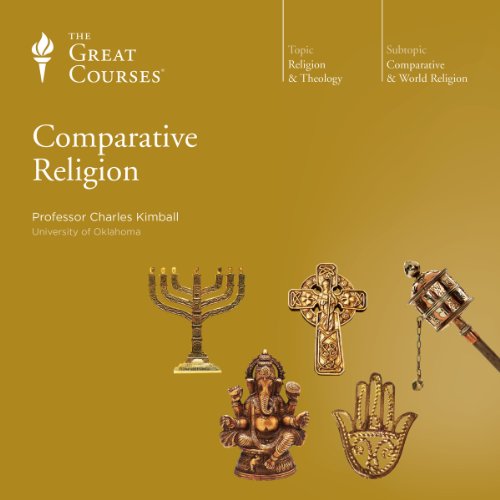 Get a solid working knowledge of the spiritual beliefs that unite and divide us - as well as the perspective from the other side of these divisions. These 24 lectures offer you an opportunity to gain a solid grasp of the key ideas of religion itself - the issues that repeatedly surface when you look at any faith's beliefs, practices, and organization. Using five major religions - Judaism, Christianity, Islam, Buddhism, and Hinduism - as illustrations of how religions can address the same core issues in parallel and different ways, Professor Kimball leads you on an exploration of religion's complex and multidimensional nature. It's an exploration that can strengthen the interpersonal understanding that underlies your daily relationships, enhance your perception of events in a diverse world, and deepen your appreciation of your own beliefs and the traditions followed by others.

Using the basics of these five major religions as a starting point - and explaining those basics so that no prior knowledge is needed - Professor Kimball plunges deeply into each to reveal and clarify the essential structural components shared by all faiths. Among the aspects of faith you compare and contrast are creation myths and sacred stories, concepts of the divine, sacred texts and spaces, and religion's ultimate goals - the reasons its adherents give them such importance.

After completing these lectures, you'll be able to "see with a native eye", as Professor Kimball puts it, when you wonder why followers of a given religion believe or act as they do.

This course covers a variety of topics and compares them across religions, including creation, where we're going, rituals (in time and space), important people, places and objects, the nature of God, the afterlife and everything in between.

The narrator is a Baptist minister and tends to give Christianity the spotlight throughout the narration. You will find that he spends significantly more time reading texts out of the Bible, and does not do the same favor nearly as often to texts he mentions, such as the Baghavad Gita, the Upanishads, or even the Quran. As someone who is familiar with comparative religions on an empirical level, this audiobook was somewhat beneficial for me as I enter my major in Comparative Religions.

Too much attention is given to Christianity in this audiobook, which is disappointing as this is an all too prevalent issue amongst teachers of Comparative Religion as it is. The Narrator also too frequently brings up anecdotes of his experiences in the Christian church, which each religion of study in the course seems to be contrasted with. Additionally, on three occasions he felt compelled to share how successful he was in particular classes during his academic career at Harvard, which was honestly annoying at times. The narrator sounds like your typical Christian-radio talk show speaker, so the narration is monotonous at best.

Where does Comparative Religion rank among all the audiobooks you’ve listened to so far?

It is my first great courses book, and I find it very relevant, easy and covering a lot of topics. The best thing in it, that it developed my hunger for more of those !

The lecturer is supremely boring in spite of very interesting content. I found my mind wandering constantly unable to pay attention to the monotonous and unenthusiastic delivery of the lecturer. So many better Great Courses out there - this was really disappointing.

I enjoyed these lectures and found many points enlightening but agree with other reviews that it is very Christian oriented. Less focus on the bible and Jesus and more comparisons on the contrasts and similarities would have been better.

What disappointed you about Comparative Religion?

It is told from to much of a Christian point of view. It gives short shrift to the other religions.

Would you ever listen to anything by The Great Courses again?

What didn’t you like about Professor Charles Kimball’s performance?

My concerns are performance based.

What character would you cut from Comparative Religion?

EYE-OPENING! A MUST READ FOR EVERYONE!

If you have a curiosity about your Faith or Faith in general, this course is one you should make a priority. Professor Charles Kimball is an excellent and very knowledgeable about the religions he gives profound comparisons. You must not miss this course!!!

I wish it went more in depth. much of what was said seemed very obvious

I enjoyed learning about the five major religions. This was a good review. It also helped me link the Jewish Muslim and Christian views. For a classroom style book this was very informative and even enjoyable

Mr Kimball's delivery is a little monotone. Usually I can live with that if what the speaker is saying is interesting. However, the lengthy intros at the top of each lecture mean that you don't get to the meat of each topic until at least five minutes in. Also it didn't give me the insights into comparative religion that I thought it would. I'm no expert but it felt a little basic for me even. This could just be a personal thing, judging by the rest of the reviews people like it. For me though it was far too slow and I didn't really learn anything I didn't already know. I became so frustrated that I quit after seven lectures.

I wanted this book to teach me about the 5 religions. Instead it just uses the 5 religions as an example to present a comparative religion framework.... A very broad and obvious framework that isn't useful.

Topic should have provided for a fascinating journey. It's unfortunate that the narration was not engaging at all.