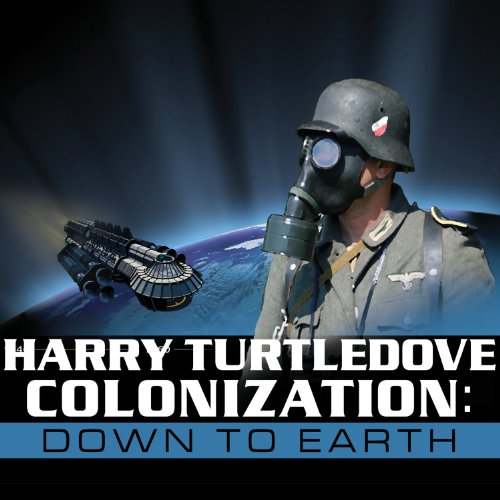 Colonization: Down to Earth

“Turtledove demonstrates his talent for crafting drama on a global scale by concentrating on the individual stories that make up the big picture.” ( Library Journal)

In 1942, Hitler led the world's most savage military machine. Stalin ruled Russia while America was just beginning to show its strength in World War II. Then, in Harry Turtledove's brilliantly imagined World War saga, an alien assault changed everything. Nuclear destruction engulfed major cities, and the invaders claimed half the planet before an uneasy peace could be achieved.

A spectacular tale of tyranny and freedom, destruction and hope, the Colonization series takes us into the tumultuous 1960s, as the reptilian Race ponders its uneasy future. But now a new, even deadlier war threatens. Though the clamoring tribes of Earth play dangerous games of diplomacy, the ultimate power broker will be the Race itself. For the colonists have one option no human can ignore. With a vast, ancient empire already in place, the Race has the power to annihilate every living being on planet Earth.

great once again but...

the books story was once again amazing but i wish the voice of todd McLaren had read it as he was a better performer than Patrick lawlor that is the only issue with this book is that lawlor did not read or listen to the world war series as he frequently missprounouses names and the general flow of the read.

Greatest fiction writer of all time!

Love all of the series! Good twits in history and always well thought out.

A continuation of the story except

Once you've reached this part of the Colonization Series, one is used to this narrator. At least he's no longer tacking on the emphatic/interrogative coughs anymore. But the last four minutes of this audiobook have nothing to do with the story. It's just the narrator repeatedly saying to check out some of Tantor's other publications, either online or the troll-free number. So once he gets to repeating that, you're set unless you really want to hear "Audible hopes you enjoyed this program."

No action, too much meaningless dialogue. Wasted my money. Previous stories were much better than this.

book was good I thought of coarse all harry turtle dove books are good in my opinion.

Well written. Love the series. Great thing that it uses real people and try to interpret the books can't wait for next one

Colonization: Down to Earth

This is a continuation of the World War four book series This is part of a trilogy , book 1Colonization: Second Contact , Book 2 Down to Earth, Book 3 After shocks. Beware Audible has only two of these seven books available currently.

While the jumping around became a bit trying, it was still entertaining.
Some of the dialog was ridiculous, such as humans calling bombs "metal bombs". Who in 1940's called them anything but bombs? I could understand The Race (the aliens) using this dialog since their language may not have an equal word to describe a bomb but for humans to use this sort of terminology was odd. The same for the space travel portions. It made human space travel far more primitive than it should be, particularly since it recognized that America had been to the Moon by the 1960's despite the invasion. It also made The Race's space activities much more primitive than it should be for entities who seized half the Earth from another solar system and completely conquered three planets in other solar systems. They also never explain why The Race was unable to conquer Earth entirely since they invaded while Earth was fighting WW II so we had no nuclear weapons, no space vehicles at all and only primitive rockets developed by Germany and no submarine launched missiles when they invaded.
Yet it is now the late 1960's and this novel has Germany with submarine launched missiles. How could a mostly conquered planet be allowed to develop these sophisticated weapons while under the control of the Aliens? Even America had the "Grey House" in Missouri because The Race nuked Washington DC and most of Eastern America. Guess the Race doesn't like Dems.

So there are a large number of plot holes in this novel if you think about it, but it was still an enjoyable tale where neither the Earth prevails nor is totally wiped out by aliens but reaches a delicate balance with the nations who were fighting WW II still in the same relative positions with Germany being an aggressor nation, Russia wavering back and forth, France split between Germany and Free France and oddly enough, England supporting Germany while Japan is testing nuclear weapons on Bikini Atoll!

I would have given this 3.5 stars across the board but 3 stars would have been too unkind. A bit of a slow burners. Although it has a larger arc, it almost feels like several mini novella tied together. Very different to the other books having more or a political thriller than a war epic. I would have like to have see Britain and Nippon / Japan play a larger role in the Colonization series. Some of this was teased late on in this book so I hope it pays off for part three. Although I still think the sex scenes add to the story I can understand why some people find them hard to read / hear. My main criticism with them though is that they feel carbon copies of each other with only character names changed. Totally different characters do the same things and react in the same way. A good example is Reuven and Johnathan, they are different ages, come from different cultures and upbringings. But their views on love and sex are identical, they feel uninventive and stereotyped. As I said for Second Contact, Patrick Lawlor has a good voice but he really struggles with accents and the characters don't feel as vivid as Todd McLaren made them feel in the Worldwar series.

So I read all of this series, from beginning to end, when I was a kid, maybe around 8... I LOVED them. They left such an impact on me that Sci-Fi has been my favourite fictional category by a wide margin ever since.
And I might even go so far as saying that my own interest in becoming a Sci-Fi writer was ignited by this series.

However, listening to this series now, years later as an adult, I find that where I lacked judgement as a child, I now have plenty of judgement around the topic of niavity and reptition.
I find many concepts turned around the maypole in this series to be strangely naive, and not even topics directly related to the Race.
This instalment in particular brings up the discussion of nurture over nature, and I personally do not think that Mr. Turtledove did his due research into this topic.
Also some of Sam Yeager's opinions about The Race I find mind boggling. Finding them interesting and even empathising with them is one thing, but he goes as far as holding the Lizards' lives as of higher import than those of his own people, even if that topic is raised indirectly.
I have trouble imagining a world where (in this circumstance) most Humans' wouldn't hate The Race with a desperate passion.
But my main issues with the fic are two simple points that many will agree with:
A ~ Repetition! Repetition! Repetition! The same thing gets brought up again and again as though its as fresh each time. From how the Race feels about the cold, to the heat, to Human behaviour, to language, to almost every important difference between the two species and their respective homeworlds.
B ~ Too many characters! 8 in 10 of them add nothing to the plot, and I end up not giving a s**t about whatever happens to them. Their own characterisation is fairly two dimensional and is hard to empathise with.
It's easy to tell which character Mr. Turtledove intended as the "main characters."

I don't find the narration to be as bad as some reviews make out it is. He isn't my favourite narrator, but I don't find him to be "bad," just not a grade-A narrator.

I'd love to see this series continued and even with the final "Homeward Bound" novel reimagined, and continued, into a broader universe.
Just with half the characters.