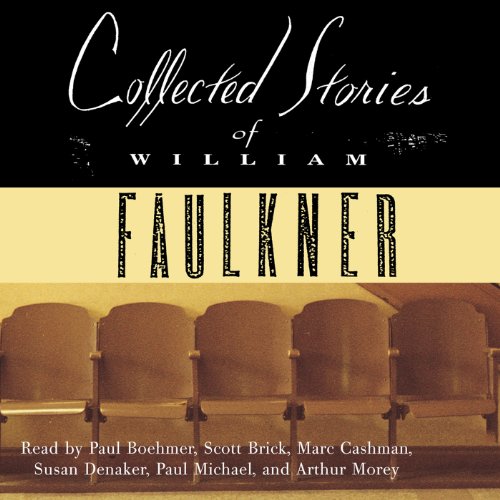 This magisterial collection of short works by Nobel Prize-winning author William Faulkner reminds listeners of his ability to compress his epic vision into narratives as hard and wounding as bullets. Among the 42 selections in this audiobook are such classics as "A Bear Hunt", "A Rose for Emily", "Two Soldiers", and "The Brooch".
©1976 Jill Faulkner Summers (P)2005 Random House, Inc.

Faulkner is one of those writers I could never get into, but always felt I 'should' like because of wide acclaim. Felt this way about Hemingway for many years until I was at an age where I could appreciate the weight of the work. I am age 31 and, though I can't grapple with Faulner's novels yet, found the short stories quite amazing and much different than what I expected (having read portions of some of his novels). This book costs two credits, but I think it's worth it because the narration by three different readers is perfect. The stories, "Black Music," and "The Tall Men," and a "Rose for Emily" are alone worth the price of this audio. Without exaggerating, I can tell you I've listened to "The Tall Men," at least six times. One day I hope to be able to read an entire Faulkner novel, but for now the short stories are great and very readable (listenable)

Too Bad So Sad

What disappointed you about Collected Stories of William Faulkner?

Nothing disappoints me about Faulkner's stories.

The production of this collection, however, is unfortunate. There's no index, no distinction between the 6 sections you download (that is, you can't choose one section over another) and the stories run back to back with no gaps so you have to be paying very close attention to the timer to find '0' between stories.

I found it frustrating. With a hard copy of a collection, the reader can choose which story they start with, etc. Not so with this collection for the listener.If all you need/want is background on while you do other things, I suppose 35 hours of Faulkner is as good as it can get.

But, if you want a collection you can relish and return to favourites from, and discover new narrators from, you'll have to listen to the whole 35 hours, bookmark each story, and write your own notes on Titles, Narrators, length, etc. That's a lot of work...that shouldn't be required.

I really wish Audible would do Signature Performance of Faulkner's most familiar short stories (Barn Burning, A Rose for Emily, etc.) narrated by the same (Southern) celebrity.

A nice way to get the feeling of Faulkner

I really liked the narration, different people make the stories sound more lively. Also, i have tried to read/listen to Faulkners novels and could quite pick my way through the. The short stories are a nice compromise, maybe now that I am used to his manner, i will be able to enjoy the longer genre.

Thank you very much Audible!

Completely Useless as an Audio Book

OK, I really wanted this collection but the way it's arranged, without a pdf file for where stories begin and end, it's completely useless. Some stories have multiple parts so as you start listening to a story, it may be 30 minutes or a couple hours and spread over 5 parts. And if miss a section, there is no way of knowing which part of which story you are in.

As an audio book, it doesn't work. I asked audible for a program---anything. They haven't got one. So you haven't even a list of titles (in order) to guide you. And, as it comes in several large files it's impossible to find anything.

That's a shame. If only there was something that indicated that X story is in Part 3, second section, you could find it!

No, sorry. I have to ask for a refund on this as it's really not useable without a program.

Audiobook Table of Contents (by Chapter)

I. THE COUNTRY
Chapter 1: Barn Burning
Chapter 2: Shingles for the Lord
Chapter 3: The Tall Men
Chapter 4: A Bear Hunt
Chapter 5: Two Soldiers
Chapter 6: Shall Not Perish

I love reading William Faulkner, though at times his work is difficult to follow on audio and it, of course, can be spoiled by a bad narrator, just like any other book narrated by Scott Brick.

If one listens to an audiobook in which the narration is heartfelt and the narrator can actually act in narrating, it's such a wonderful experience. A recent example for me is "Last Days of California" by Mary Miller (like Faulkner, a Mississippian), narrated by Andi Arndt. Ms. Arndt apparently put in a tremendous effort, to sound Southern, young and to act as in teen angst and in constant banter between 2 teen sisters. She made the whole thing so real that I got lost in it like a good movie.

Scott Brick's narration gives a soap feel and at times slides into adult-film grade acting. He overdramatizes a word in each sentence (usually the last one) and at times emphasizes every 2d or 3d syllable in every other or 2d or 3d sentence in a paragraph (with no real pattern, perhaps on an ad hoc, random basis). And, you can't help but notice his adulation with his voice; this effect on the (this) listener absolutely ruins the audiobook. I have wondered more than once if he has his latest narration piped into speakers throughout his house and poolside.

I have had to return books I purchased because his smarmy narration was worse to me than listening to 3 kids scraping rulers repeatedly over a chalkboard.

I had already rated this audiobook long ago, but just decided to add the review because I have recently come across books I would have loved but dropped like any other Brick. From reviews I've read, I'm not alone in my chagrin. I'm hoping enough noise will make a difference in audio-casting for prime books.

Difficult to identify and separate the stories.

Excellent entes stories as expected and good performances in general. However no way of knowing which story is being read! The list of chapters give zero information on this! A pity..

The short stories of Faulkner are an excellent intro to his writing style and his Mississippi subject matter. A lot of these stories connect into his novels, or they are original drafts of chapters of his later novels. Pretty insightful stuff if you give it time and read through these. The readings are performed by a variety of narrators who all do an excellent job. Highly recommended. He's considered to be one of the best writers in American history - so this production is a valuable resource for people who do not have the time to sit and read, but want to expose themselves to one of the greatest fiction writers.

I got about halfway through this collection and had to admit to myself that I was forcing myself to listen to it. I was told by many people, "If you like Steinbeck, you'll really like Faulkner, too." That just isn't the case. Probably many people like both, but I just can't get into this collection. I find myself wishing they'd finish one story so I could try the next, and again, and again.

42 Classic Faulkner Stories Is a Bargain!

I've been dipping into it ever since I bought it four years ago, and I finally finished it. Many widely anthologized stories ("Barn Burning", "A Rose for Emily") are here and they're read for a reason. I was surprised by Faulkner's range - I don't assoiciate him with humor, but my favorite story is the laugh-out-loud "Shingles for the Lord". A technical note: there are too many "chapters" (I would have preferred one chapter per story), and each chapter started a few seconds too late, so it was very difficult to find my place. That said, the narrators were fine, and this collection is an excellent buy.

What did you like most about Collected Stories of William Faulkner?

Its variety across Faulkner's many styles and genres.

There were a number of narrators and they each caught the variety in Faulkner's writing.

An apparently casual observation (because it is hardly a sentence) from “Elly” (1934) catches something of how Faulkner writes. Elly, in bed with one of her many lovers, without any relationships apparently being “consummated”, describes herself as “already fled without moving” (“Elly”, 1934). Or at least this is probably typical of how Faulkner has his characters inhabit a present which is never only the present, though the past is more likely to figure in a character’s present than the future. Yet, Faulkner writes in many styles and even genres in this collection of forty or so stories. "A Rose for Emily" (1930) is both Southern gothic and sociology of a Southern town, albeit at the very edges of everyday life. "Centaur" (1932) shows Faulkner conveying a very un-aristocratic South in this episode in the rise of a member of the Snopes family. And then there is the truly shocking story of race in the South, "Dry September" (1931), which is told in a resigned, un-melodramatic way, at the other end of the spectrum from the gothic, in spite of its core of terror. Faulkner moves easily from the high rhetoric of "Centaur" to Hemingway-like hard-boiled in "Death Drag (1932).

While I prefer Faulkner’s greatest novels to his greatest short stories – and this collection includes all of those – his stories read like parts of something on-going, while a novel like “Go Down Moses” gains from the discontinuities that occur when something seems to end.

The story's are of their time very enjoyable. They would not suit the PC brigade.

I'm familiar with most of these stories from the Snope's Trilogy. The first two short stories are new and among the best I've read, but those which follow appear to be drafts for tales from Faulkner's novels.