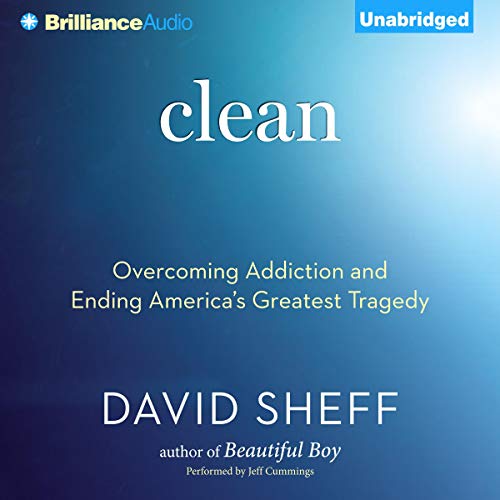 Addiction is a preventable, treatable disease, not a moral failing. As with other illnesses, the approaches most likely to work are based on science - not on faith, tradition, contrition, or wishful thinking.

These facts are the foundation of Clean, a myth-shattering look at drug abuse by the author of Beautiful Boy. Based on the latest research in psychology, neuroscience, and medicine, Clean is a leap beyond the traditional approaches to prevention and treatment of addiction and the mental illnesses that usually accompany it. The existing treatment system, including Twelve-Step programs and rehabs, has helped some, but it has failed to help many more, and David Sheff explains why. He spent time with scores of scientists, doctors, counselors, and addicts and their families to learn how addiction works and what can effectively treat it. Clean offers clear, cogent counsel for parents and others who want to prevent drug problems and for addicts and their loved ones no matter what stage of the illness they’re in. But it is also a book for all of us - a powerful rethinking of the greatest public-health challenge of our time.

Would you try another book from David Sheff and/or Jeff Cummings?

Not by Jeff Cummings.

Has Clean turned you off from other books in this genre?

The Performance Gets in the Way

What did you love best about Clean?

There is some good information in Clean; however, the narrator's insistence on doing voices is distracting at best, and annoying at worst.

as an addict myself, i had been struggling, thus gave me answers I needed and longed for. when people asked me why I did what I do I was skeptical to say i had a disease bc I cldnt explain or prove that it was. I was in complete dispare. AA was helpful but not enough, now I feel like i know what to do next. i dont want to use drugs and now i have hope again that my body wont want to either.

Another excellent work brought down by narration.

What made the experience of listening to Clean the most enjoyable?

Not an enjoyable listening experience at all. Made it difficult to get through. A grown man attempting to speak dramatically in the voice of a woman, a child, etc. is terribly distracting. I have listened to over 75 audible books and this was in the top two of worst narrations.

What was one of the most memorable moments of Clean?

Exhaustively researched, absolute newest science, and a father's perspective. Addresses the full scope of the problem and lays out infinitely better ways to work the problem. I'm certain it would be really frustrating for David Sheff to know that this excellent material was not received because of something so seemingly unimportant as narration but it's like trying to read a book where the typeface is distractingly random. You just give up.

What’s an idea from the book that you will remember?

Could not finish due to narration, will return and buy in print. Very disappointed.

Narrators, take note. You are not performing a play, rather putting information in audible format. Just read the dialogue, it isn't voiceover work.

I couldn't finish it because of the performance...

What made the experience of listening to Clean the most enjoyable?

Were the concepts of this book easy to follow, or were they too technical?

Not too technical for me.

There's this weird thing with some voiceover artists where they feel every single character needs a "different" voice, but their versions of those voices are annoying and odd.There seems to be a weird "female" voice affected by some male narrators that doesn't sounds like any female voice I've ever heard. It's really hard to focus through that weird affectation.Even some of the "male" voices are achieved by trying to speak in a lower voice, but it just comes off as amateur.I wish people would just read the book and not worry so much about changing their voice. Or...if they ARE going to change their voices for each character, they should be careful of not making every female character sound like a wimp and deep-voiced male character sound inauthentic.

No...and due to my annoyance with the reader, I don't plan to finish. I only made it to chapter 3.

I have to listen more closely to the samples before I but an audiobook. This disappointment happens often enough that it's starting to make me wary.

This book took a judgmental approach to addiction. If you are someone who is suffering from addiction, I would not recommend this for your first book.

I couldn't get through more than 1/4 of this book--not because the subject matter wasn't interesting, but because the narration was unbearable. The narrator read it like he was reading characters in a novel, but adding all sorts of inappropriate inflection everywhere. I still really want to read this book and will get the physical book to read myself at some point. If you're really interested in this subject, I suggest you do the same.

I am dealing with a son who is an addict This book is extraordinary in such a way that the information an the way it it is presented has incalculable benefits for us. Thank you for this incredible resource for us in our battle to harness the addiction!

What disappointed you about Clean?

This author is not a scientist and has no business writing a book about how to eliminate addiction from society. He has obviously been misled by people who still think that addiction is a disease. The rest of us are moving on to a more cogent opinion. Addiction to anything is not a disease. We are just beginning to realize that our brain was created to be much more plastic that we have ever realized. The grey matter, the glial cells, are not just filler but the sort of switches that activate or deactivate the neuronal patterns. I did listen to A Beautiful Boy written by the same author which was experiential and very good(although the waste of money in treatment programs was disgusting). I have several friends and members of my family who have passed through an addiction phase but, now, live productive lives. I also recently read a book about the great statesman, Henry Clay. It surprised me that his own character was flawed as a gambler, drunkard and womanizer. He had one son consigned to an asylum for a malady not identified at that time. He had another son who went through a period of wanton and drunken behavior who recovered in midlife and went on to be a successful farmer. I have to say that every drunk or drug addicted person that I have witnessed put down the bottle, the pill or the syringe has done so without 12 steps but with the help of God. The nation,in general, has rejected God and has tried to bring God down to a level at which we understand him. I don't understand everything about God, but, if I did, he wouldn't be the God I know to be the ruler of the universe and yet, my personal friend.

Has Clean turned you off from other books in this genre?

Certainly not. Most of the ones I have read have been written by psychiatrists or scientists that have spent their lives discovering the truth about our human brains. The truth is a puzzle which is only partially completed.

I do not think the narrator detracted from the poor material and fallacious assumptions of the book.

Not that I can think of...I will probably listen to some parts again, but as, previously mentioned, David Sheff is not qualified to write such a book.I do wish someone, who is qualified, will come up with a workable plan in the near future.

I am appalled at the waste of this generation's human resources. What does make a child, who has every opportunity to excel, degenerate into a useless human being who becomes a negative influence on society? It did not happen overnight. It started in my generation and before(the 60's) when the true nature of Americans, as selfish and self oriented experimental humans, became a norm. I know people who have smoked marijuana every day for 50 years. They are the parents who expect their children to experiment and to look for creative juices from external sources. These are the parents who have raised the children with a "relative" world view with few if any absolutes. A world where two plus two does not always equal four can expect nothing but chaos.