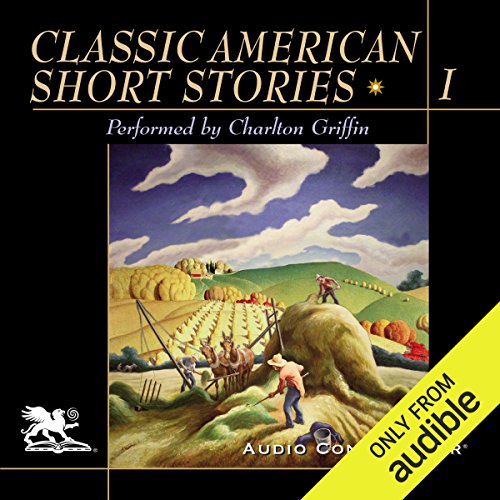 "Charlton Griffin is dazzlingly good, with regional accents, with the change in timbre from a boy's voice to a woman's and a man's, and most of all with his nuanced understanding of how to deliver the narrative from writer to reader without getting himself in the way." (AudioFile)
"With its flawless technical recording values and masterful presentation, this first volume in the Audio Connoisseur Classic American Short Stories series will leave the listener eagerly awaiting a second volume!" (Midwest Book Review)

Unlike the other arts, American literature has been a powerful, influential, and leading aspect of American culture. By turns sedate and mercurial and possessing a moral mind set of various social values, the American short story reveals in its pages the psyche of a growing, sprawling nation whose sense of destiny has always been larger than life. Here are seven masterpieces that will make you smile, make you frown, and leave you pondering the mystery that surrounds the soul of a great nation.

Selections in Volume 1:
"A Journey" by Edith Wharton - A woman tries to conceal the death of her husband on a train trip.

"Impulse" by Conrad Aiken � After a lifetime of pushing his luck, a man pushes it a little too far.

"Only the Dead Know Brooklyn" by Thomas Wolfe � A lonely man with a map tries to understand a little piece of the earth.

"A Christian Education" by Robert Penn Warren � A troubled farmer recalls the life and death of a retarded boy.

"Barn Burning" by William Faulkner � In prose as fully mature and beautiful as anything he ever wrote, this is one of the most searing indictments of revenge ever put on paper.

"Paul's Case" by Willa Cather � A youth decides to put his life of fantasy and that of the real world on a collision course.

"The Devil and Daniel Webster" by Stephen Vincent Benét � This beautiful, riproaring tall-tale embraces all that is good in American life.

The stories in this collection represent probably the best writing that has been accomplished in American literature. This is the good stuff, much of which you may have already come across in high school or college. In the hands of Charlton Griffin, these stories have been transformed into audible works of art. I didn't find these magnificent pieces depressing at all, and I must say that hearing them performed so well was a revelation. America has made a great contribution to world literature and hearing this collection will make you realize this. An educated person needs to hear this one.

I can't imagine a better reader--with the possible exception of Richard Brown, who narrated many of the O'Brian novels (Master and Commander, etc). The sound effects (trains, subways, old-time fiddle music) transform the reading--brilliant in itself; Griffin does an immense range of voice and accents--into something even greater. One reviewer complained that the stories are dark. Well, sure, most of them are dark. What else is new?

I have heard or read or seen movie versions of some of these stories for years. I have a B.A. in Literature and have even studied some of these academically. I am still a fan of Classic American literature and the genre is yet evolving. The presentation was great. The stories were exceptional. I look forward to Volume 2.

The stories, which you may have read grudgingly in high school, come alive thanks to theatrical sound effects and music. Carlton Griffen has the most extraordinary range of voices -- full of dialectical subtly-- that I've ever heard.

Some reviewers apparently want to read classic American literature, but not encounter death. Suggestion, stay away from that Shakespeare guy; the stage is strewn with dead bodies at the end of many of his plays. But he's English, and that doesn't count. American optimism should triumph over European pessimism, n'est pas? So I would recommend Moby Dick, the great American novel of the sea where captain Ahab seeks to kill a whale. Oh oh! There's a death going to happen there. Better skip that one. We would be on safer ground to focus on a classic American humorist, say like Mark Twain. His short story, "The Man that Corrupted Hadleyburg" is a real gem; the inquest scene is a real howler... but ... oh oh, the story ends darkly -- maybe even on a downer. Injun Joe dies at the end of "Tom Sawyer" and people die in "Huckleberry Finn" including Huck's father. O my Lord!

It's a pity, but death is a part of life; and literature seeks to reflect that reality. The stories in this collection reflect all that is in life, warts and all. "The Devil and Daniel Webster" approaches mythic proportions. The collection suffers only the omission of "A Man Without a Country" by Edward Everett Hale, and I would recommend this short story to the disappointed reviewers as a fabled study in 19th century American patriotism -- except that, dear me, the protagonist dies at the end.

Anyone who can't listen to a story without music.

The story selection is first rate.

Stop the music! These stories were meant to be read - they stand on their own and the addition of sound effects is imbecilic!

Don't ever again insult great American literature with the addition of music and sound effects!

The stories in this collection are generally strong, but the performance is overproduced. When a character hears a Strauss waltz in his imagination, I don't need the producer to literally include it. I have an imagination too! There is too much music, too many sound effects in every story. The narrator has a wonderful voice, but was overly melodramatic at times. I agree with a previous reviewer - it should not be about the narrator, and it should not be about sound effects. Let the music of the language carry. For a contrast, check out the short stories of Zora Neale Hurston narrated by Renee Joshua Porter. What an amazing delivery, but the narrative still shines through.

Five stars for the stories, a half-star for the narrator whose affected resonance and melodramatic thoughtfulness draw more attention to themselves than to the texts. Narrators like this make me want to say: It's not about you, it's about the book.

What a bunch of downer stories! The writing was eloquent and poetic. The reading was excellent. The Faulkner story was especially poignant. But why would anyone put these stories together for a collection? Five of the seven stories turn on someone dying a sad and lonely death. All except Daniel Webster are totally humorless. These stories should come with a cyanide capsule. Oops, I think that was the plot of one of the stories...

Good short stories and narrating is very good. I kind of liked that some of the stories are a little on the downer side - it sucks you into the characters. But it just wasn't too entertaining for me. I was a little bored. It was kind of like watching an old black and white movie. Its a classic, but still an old black and white. I'll take Matrix over Casa Blanca any day. If you prefer Casa Blanca you might like this.

with trepidation every book lover goes through the classics. faulkner is not someone we read in australian skools so most of us not interested in amaericana probably dont visit his works. i listened to this after becoming obsessed with the korean movie burning and finding out it was loosely referencing barn burning. glad that happened as faulkners writing is a revelation. the storytelling and production is phenomenal. this is on par with dickens and i know i'll want to physically read his work as the writing is something that grabs you in and transports you to another time and place.