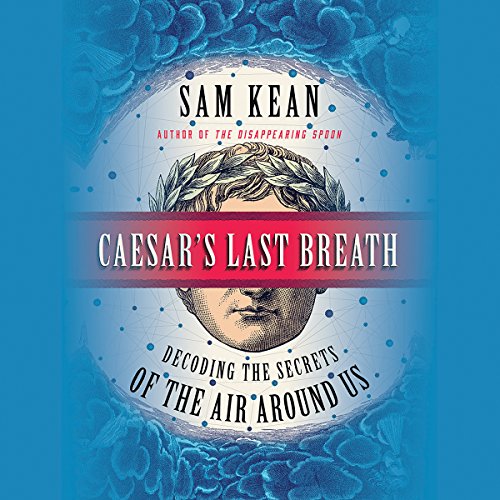 The fascinating science and history of the air we breathe.

It's invisible. It's ever present. Without it, you would die in minutes. And it has an epic story to tell.

In Caesar's Last Breath, New York Times best-selling author Sam Kean takes us on a journey through the periodic table, around the globe, and across time to tell the story of the air we breathe, which, it turns out, is also the story of earth and our existence on it.

With every breath, you literally inhale the history of the world. On the Ides of March, 44 BC, Julius Caesar died of stab wounds on the Senate floor, but the story of his last breath is still unfolding; in fact you're probably inhaling some of it now. Of the sextillions of molecules entering or leaving your lungs at this moment, some might well bear traces of Cleopatra's perfumes, German mustard gas, particles exhaled by dinosaurs or emitted by atomic bombs, even remnants of stardust from the universe's creation.

Tracing the origins and ingredients of our atmosphere, Kean reveals how the alchemy of air reshaped our continents, steered human progress, powered revolutions, and continues to influence everything we do. Along the way we'll swim with radioactive pigs, witness the most important chemical reactions humans have discovered, and join the crowd at the Moulin Rouge for some of the crudest performance art of all time. Lively, witty, and filled with the astounding science of ordinary life, Caesar's Last Breath illuminates the science stories swirling around us every second.

Sam makes science fun and accessible via great story telling. You won't regret reading any of his books. They all entertain and inform.

Review of the history of understanding gases

Caesar's Last Breath is a non-fiction book about gases beginning with those which formed earth but mostly about how humans came to understand gaseous compounds and the various gases in our atmosphere. The is a cleverly and superbly written book of science, especially chemistry written for the non-scientist. Much of it deals with the individuals who pushed science forward. As a scientist I recommend the book especially for teens with interest in science. It is both interesting and fun.

I rate this book 5 stars, but the final 30 minutes of the narration is completely Sam Kean's wild and unhelpful speculation about the future. Caesar's Last Breath would be even better if Kean had dispensed with his uninformed speculation.

super nice listen a lot of history and sci

super nice read, a lot broader than I expected, thought I would be disappointed with science, but lots of cool tidbits

excellent like his other books, shame that the disappearing spoon isn't available on audible Canada

Fascinating, informative and well delivered. I am a huge fan of Sam Kean. All of his works present such a clear and comprehensible explanation to some of the more difficult concepts to understand; be it neurology or the possibility of living on other planets. I highly recommend this book
JS

The depth of research is incredible. Congrats to everyone that participated to produce this audio book.

I read a lot of science and I learned a ton I didn't know. Historical tales are fun, too!

Who knew learning about each of the gases in our atmosphere could be so fun. Where did they come from, has this air been around forever? How much of Ceasar am I breathing with each breath? The science in this book is approachable by anyone. Each concept is conveyed with a funny anecdote. Kean is one of the best science writers around these days.

This book is about air. When I first realized this I thought to myself, how interesting can air possibly be? As it turns out air is abundantly interesting. Not in my wildest imagination (ok, maybe in my wildest imagination), did I think that anyone could fathom so many, so interesting stories about such a seemingly mundane thing as air. With its perfect mix of historical anecdotes and well-explained science, this book is a real masterpiece and I would have given it more stars if I could.

The first chapter gives you the story of Caesar’s last breath. Where are the molecules that left Cesar's lungs in his last exhale today? Specifically, what are the chances that in your next breath you will inhale one of these molecules? I vaguely remember having heard this example before, but I still thought that the size of Earth's atmosphere relative to a single breath means that the chance is very very small. But no, on average every other breath we take will contain one or more molecules that left Cesar's lungs in Rome 2000 years ago. This is because simply put, there are a lot of molecules in every single breath. Still a skeptic? I don’t blame you, but let Sam Kean inform you (if you are wondering, yes Kean does do the math).

Subsequent chapters are about different molecules that exist in the air. The privileged reader will meet the comatose nitrogen that really doesn't like to interact with anything else. Despite its passivity, nitrogen in the air helps feed 50% of the world's population since it is crucial for making fertilizer. How this extraction process was first accomplished is a fascinating story. And it is a story that no one tells better than Sam Kean. The reader will also meet nitrogen's counterpart, Oxygen, the madman that reacts powerfully with everything. The fact that organisms have managed to tame this rogue molecule is a miracle (perfect for God of the gaps people). Noble gases and radioactive gases also make prominent appearances. For each air constituent, Kean explains the relevant science and gives you one or a few well-selected anecdotes to hang your new knowledge on. The most hilarious part of the book is when Kean introduces Le Petomane, who was the best-paid artist in France. His trick? Farting like no one else in the history of mankind (do Google this person, you will not regret it (or maybe you will)). Of course, you will also learn what farts are made of and how many fart molecules you inhale each time you take a breath. I know I am repeating myself, but Kean really is one of the very best when it comes to giving life to science.

The writing is clear and accessible but the book does not compromise on scientific details. The book even has a beautiful prosaic ending which is not something I usually associate with or expect from non-fiction books. When writing reviews, I usually feel I must balance praise and critique but in this case, I feel that the book is close to being perfect. Read it! Now!