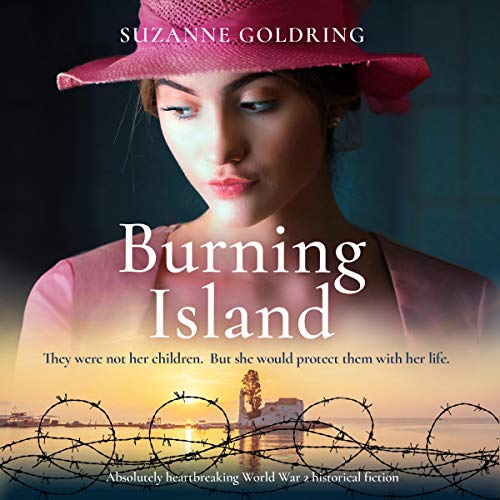 They were not her children. But she would protect them with her life....

Corfu, 1943. Though they don’t know it, five-year-old Matilde and three-year-old Anna have kissed their mother for the last time. The Nazis have reached their sun-scorched home, and they are being taken to a place of safety, on the northeastern tip of the rocky island. They are to be hidden, at great risk, by kindly Agata and her husband, until the terrible war is over.

Matilde and Anna’s tears are soothed by Agata’s bedtime stories, but she is always alert. So far, no soldiers have ventured down the steep rocky hillside to their secret haven, but Agata knows they are constantly scouring the island for missing Jews. And then, on a day when Agata’s husband is away, a German soldier appears.

Corfu, 2016. Under a baking June sun, Amber and her husband arrive in Corfu from England, hoping for a fresh start. But not everyone is pleased by their arrival, and with the pressures of pregnancy, the couple grow further apart.

Desperate to find a sense of belonging for herself and her unborn child, Amber finds herself drawn to the local story of two little girls, left by their parents and hidden for their own protection. But there are some who would rather Amber left Corfu’s terrible history well in the past.

Can Amber uncover the heart-breaking truth about the two little girls, and what happened after a German soldier took a swim in the bay by their house? If she does, can the secrets of the past help her find happiness or send her running from the island, alone?

A gripping, heart-wrenching, and compelling listen about the shadows at the heart of the sun-drenched island of Corfu and survival against all odds.

Fans of Victoria Hislop's books, The Nightingale, and The Tattooist of Auschwitz will fall in love with Burning Island.

Loved this book by Suzanne Goldring, as much as I did her book Eva. Hard to put down.

Grabbed me from the beginning.

This heartbreaking story is told over the course of two different eras. 1944 and 2016. The transitions are seamless and easy to follow. The narrator does very well to keep the reader following along. Grab your tissues and settle in! There is a curse word or two but not enough to be offensive. All around excellent read and I will look forward to more by this author.

Secrets of the Past

Burning Island by Suzanne Golding is a compelling listen that focuses on Corfu, Greece in 1943 and 2016. I loved how the author entwined the two timeframes in this heart-wretching listen. The imagery pulled me in immediately with the tragic storyline of good vs evil. The book has some great suspense. The new perspective of Nazi occupied Greece was eye-opening to me. Diana Croft was wonderful bringing the characters to life with her voice. She painted some vivid imagery with her voice and expressions.

Enjoyed the book as I’m a fan of WW II historical fiction. This story goes back and forth starting w 2007 and 1944. I felt like most of the story was modern day, but the glimpse back to the war years were well written and combined in the end with the modern day characters. The author included an ending reviewing the war years for the Jews in Corfu which was insightful.

Loves the story but long and drawn out.

I loved the story but it was very long and drawn out. Too many chapters and could have been shortened without losing anything.

While I love WWII stories especially when based on true events, this one took a while to get into..it started out slow and I tried to get to know the characters..Eventually it became interesting when the story was in the June 1944 version. I could not warm up to 2008 timeline and the husband Greg.. and as the end of their story was unfolding I hated that wife became so hardened and how she handleded things especially with the baby and Dad..

Took a couple chapters to get my footing but then I was all in. Beautiful imagery and thoughtful stories.

Once I figured out how we were jumping from story to story I was hooked. One of the best books.

interesting ,liked that it kept to the historical information, I liked the book, just not overly so.

The story was a bit difficult to follow for the first hour. After that it got better. The narrator was ok.

James and Amber move to Corfu to start a new life yet they do not know what heartbreak faces them. They start a dream restaurant make new acquaintances and friends. What faces them is the breakdown of their lives together with the loss of their home and lifestyle

Amber learns of the story of the Jewish people living on the island during the war and how they were transported by cattle cars to Auschwitz. For most, the trip brought death and the gas chamber their destiny at their destination.

Both stories were well told and I wanted to read at every opportunity. It is thrilling and heartbreaking in equal measure.

It is particularly apt at the moment with the 75th Anniversary of Auschwitz-Birkenau liberation I loved this book and would recommend.

What a cracking listen!

5* for narrator who was excellent and 5* for the story. I was engrossed from the beginning, loved the characters and the two stories. A truly great book, thoroughly enjoyed it.

A compelling listen. Such a good insight into the suffering which occurred on Corfu and the after effects of the war there. Beautifully narrated.

Though it took me a while to sort out the two storylines. Well constructed and an enjoyable book.

A dual time frame novel, set in 1944 and the present on Corfu. It interweaved what happened to the Corfu Jewish population with a modern day story. The 1944 story was really interesting as it was a fiction version of what happened in 1944, a story I wasn't aware of in the Island's history. The modern day story brought to life the island and locations used in the story however I wasn't as keen on this element of the story as I didn't really connect with the characters, finding the historical aspects much more absorbing. The story moved along well and the historical notes at the end were interesting.

Thus is an interesting book. It tells 2 stories set in Corfu. It made me wistful for vine draped terraces and good food. The stories are set 60 odd years apart. Both interesting and informative.

I have holidayed in Corfu a couple of times but knew nothing of what happened to the Jews during the German occupation in 1944.

The book takes place in two different periods, 1944 and 2006/7. Amber and James's story was given much more prominence in the book, and although I enjoyed hearing about how they ended up on Corfu, building up their business, it became a bit repetitive. The 1944 time period was much more absorbing and I wish this had featured more prominently. The plight of the Jews is sensitively written but Isaac, Perla and Rebekka's inhuman journey to Auschwitz was heartbreaking to read and quite a few tears were shed. Anna and Matilde's story was also totally engaging.

I didn't connect very much with the present day characters, apart from Inge and Marion, but the characters from 1944 were all brilliantly written.

The historical notes at the end of the book were very poignant. The author has obviously researched the subject very well.

Excellent narration by Diana Croft who did a great job with all the different voices.