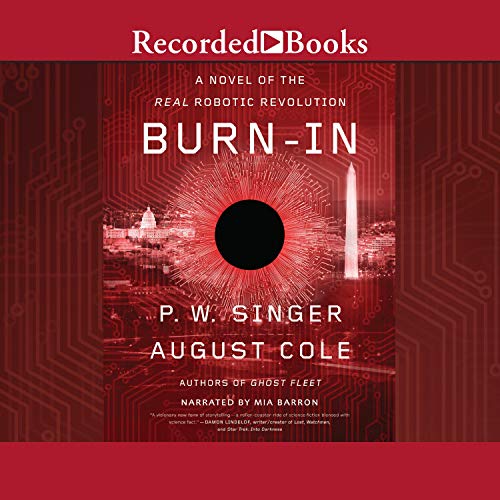 An FBI agent hunts a new kind of terrorist through a Washington, DC, of the future in this ground-breaking book - at once a gripping techno-thriller and a fact-based tour of tomorrow.

America is on the brink of a revolution, one both technological and political. The science fiction of AI and robotics has finally come true, but millions are angry and fearful that the future has left them behind.

After narrowly stopping a bombing at Washington’s Union Station, FBI Special Agent Lara Keegan receives a new assignment: To field-test an advanced police robot. As a series of shocking catastrophes unfolds, the two find themselves investigating a conspiracy whose mastermind is using cutting-edge tech to rip the nation apart. To stop this new breed of terrorist, their only hope is to forge a new type of partnership.

Burn-In is especially chilling because it is something more than a pulse-pounding listen: Every tech, trend, and scene is drawn from real world research on the ways that our politics, our economy, and even our family lives will soon be transformed. Blending a techno-thriller’s excitement with nonfiction’s insight, Singer and Cole illuminate the darkest corners of the world soon to come.

Although there are intereting insights early in the book about how tech will change our lives in the future, the story devolves into a cheap political thriller with a cliche cast of villains who are nothing more than straw-man characatures from today's political discourse. Given that technology and automation are issues that cut across political boundaries, the writers' political bias is all the more noticeable as they weave uneccesary social commentary into the plot and give a historical backstory of American politics that seems to be from the MSNBC version of recent events. More disappointingly, the writers don't take opportunities to engage in real discourse about how we might blunt the effects of automation on society. Instead, they give us cheap emotional tricks to build our sympathy for the hero and their political view.

Anyone who enjoys technical action thrillers will find plenty to like about Burn-In. AI/ML, drones, robotics, meshed cloud networks, PKI, bitcoin, and more blend with politic. war, and social changes. You will enjoy it all!

Was excited about this one and it had promise but I could not finish. Narrator’s use of a slow drawn out voice for all male characters was annoying. As it seems with most modern movies and books just about every male character in this novel was flawed in someway. Odd depiction of American vets and the bad guys were “red white and blue Nazis “?

There's enough blending of geeky details, philosophical musings on the blend of AI and humanity, action at scale [of the summer blockbuster kind] and personal drama to keep everyone reading. Great book.

A very plausible view of the future

Having spent most of my career as a statistical analyst and programmer the book paints a very plausible and realistic picture of a future 20 - 30 years from now. The story was interesting and nicely "wrapped up" in the last chapter. So be patient. Almost everything in the book is either is a story about the future or a clue in the story.

The story was good, sometimes it drug along but on the whole a good read; the audiobook portion was horrible. The vocal affects used took you out of the story and made you question “why are they doing that?!” It was enough to force me to revert back to reading the book in order to finish.

There’s no story. It’s just an AI bot and a cop handling different situations. Some cool futuristic tech, but it’s lacking a plot.

Once you get the foundation of the story and the technology this a great story with good characters. Looking forward to next book. Narrator did a great job.

I was a fan of Ghost Fleet so I got this book. It is a very slow and boring story.

Returning - not holding my interest

AI fiction books have had my attention. There's been some very good ones in the sci-fi genre and I really enjoy them. Especially the Murderbot series and the Union Station/EarthCent series by EM Foner recently, and others before those - most of them have some humor though. A different, lighter approach to this serious topic.

As fascinating as the information coming through about near-future implications and applications of AI are in this book, I keep turning off this audio book and finding other things to do. Coming back, I have switched to other books and avoided coming back to this one.

Perhaps it's the dystopian setting - not helping me to escape through entertainment. But, I think it is more to do with the arms-length distance the main character is from me, the reader/listener. There is no connection to this main character - nor to any character in the book. They are shallow rather than 3-D, and not likeable. Recognizable types, yes. Likeable, relatable, or holding my interest to see what happens next . . . no.

Maybe the time isn't right and in the future this book would keep me interested. I see the author has also written non-fiction books on this tech - I could always get informed through those, and find entertainment in other books.

The narrator's poor attempt to do character voices was nothing but distracting, would have been better if the dialogue was narrated, and not acted.
I found the plot forced to try and fit in the underlying technical material, with underdeveloped and weak characterisation. Whilst the main character was further developed a lot was still missing, certain portions of her backstory were hurriedly developed towards the end but then left hanging with no conclusion.
I enjoyed the authors previous work 'Ghost Fleet' but feel let down by this novel and found it a challenge to finish.

A brilliant book that is as enthralling as it is thought provoking. Highly recommended to you.