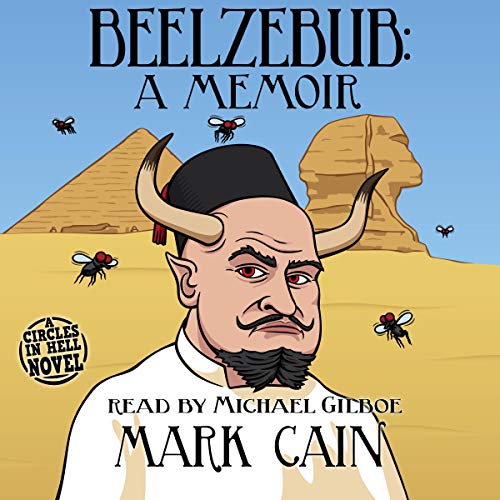 "Do you know me? I am Beelzebub, Lord of the Flies, Prince of Hell, second only to Satan in the infernal hierarchy. The Devil, you say? Yes, I'm one of those too."

Here in one laugh-out-loud volume is the life of Beezy, Satan's BFF, and one of the most popular characters in the Circles in Hell universe. Over 14 billion years in the making, Beelzebub: A Memoir is the ultimate backstory.

Beelzebub is the latest novel in the best-selling fantasy comedy series, Circles in Hell. CIH has been compared to other comic works of "Hell fiction", such as The Screwtape Letters and Good Omens, and to the paranormal humor of Tom Holt, Christopher Moore, and Douglas Adams.

For listeners new to Circles in Hell, Beelzebub: A Memoir is an excellent introduction. For those who have listened to other titles in the series, here is a chance to spend quality time with some of your favorite devils, demons, saints, and sinners. And one big bat!

This book left me wanting to go out for a beer

When you read/listen to the book, you will understand the title sentence I used for this review.

I have been a fan of this series ever since I listened to the first book. I am so glad that Mark decided to continue on this series and I can't wait to see what he has in store for it in the future. I would love to see the tales of Steve Minion referenced from the point of view of the other princes of hell.

Either way, this story takes on tales from the point of view of a favorite character of mine, BZ. Learning about BZ's history straight from the mouth of the lord of the flies was an interesting twist on the series. I will admit that I had envisioned a different conclusion to the series that tied back to the first few books, but I quite enjoyed it none-the-less. I thoroughly enjoyed how BZ/Nick went through history attempting to influence, without direct involvement, the outcome of humanity. Loved the parts dealing with a certain sailor/adventurer and how he was led to success in his endeavors.

Mark did it again with this tale and Mike, as always, did a fantastic job with the narration. That said, I originally pictured Steve Minion as I heard Mike's voice narration for BZ, but I adapted quickly as the chapters progressed. I still love hearing his voicing of Satan.

This is a fantastic continuation of the series and one I am sure that, if you've enjoyed the books to this point, you will enjoy just as much.

I love this series. It is absolutely amazing. Characters are complex and plot well constructed.

Excellent books! I have one left and can't wait to start it. There is a lot of twisted history and folklore in the stories.

Awesome book - think of it as an alternative history from the other side....

Great listen- laugh out loud at times. Great way to link real historical events to the high jinks of the underworld team ... very enjoyable. I even learned some new historical details- I.e how Charles the Affable of France died. A great addition to the series or as a stand alone book.

As long as this author and narrator keep this team going, I will keep buying.

Another spectacular story in the Circles in Hell universe. Always excited for the next in the series.

whoever is narrating this book is horrible at it, he makes each character sound weird

Historical Perspective From the Celestial Skydiver

A great history of the world according to the lord of the flies. Terrible accents by the narrator but they are fun to listen to.

Not up to the standards of his first five books.

I absolutely loved the first five books by Mark Cain. This book, not so much.
Seriously considering returning it and getting my credit back to get a book that I'll be happy to listen to over and over.
This book wasn't funny you could tell he was trying to be funny. It did not get decent until after the 13th chapter. I almost gave up by chapter 10.

The downside of listening/reading the other Hell’s Super books is that they put the bar very high for other stories set in that universe. The upside of this book is that the story is new. Great book and superb reading!

It is more of a prequel to the entire series This is a series that delights with every turn of the page. The narrator really gets it.

After listening to the circles in hell series I was very hopeful.
This book is awful. It's not funny and doesn't succeed in being tongue in cheek either. The narration accents are terrible. The story is just a load of historical clips told from the view of beezy. Who is nowhere near as good as the character in the original series. I am really disappointed and will be returning this book.
.