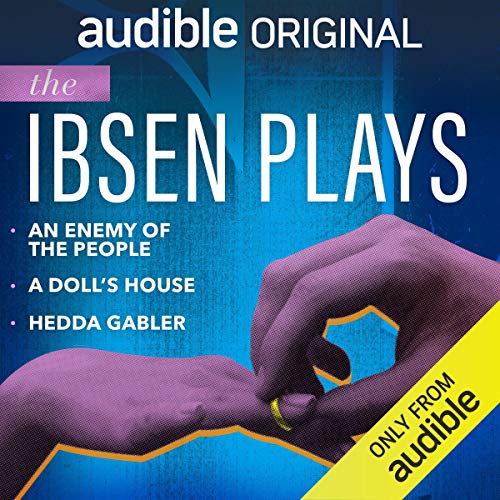 Born in 1828, Norwegian playwright, theatre director and poet Ibsen, wrote in Danish yet lived for many years in Italy and Germany. Heralded as one the most distinguished dramatists after Shakespeare, by the early 20th century A Doll's House became the world's most performed play.

A poignant study of loneliness, impotent rage and societal expectations breeding a certain kind of madness, this trailblazing play focusses on Hedda Gabler, 'the general's daughter', and her rising feelings of anger and jealousy towards a former schoolmate, fuelled by her lack of control in her own life. When a former suitor comes back into her life, bringing with him all kinds of complication, passion and history, Hedda devises a plot to win back her power... which ultimately leads to a very civilized sort of chaos and, ultimately, tragedy.

Nora Helmers is her husband Torvald's adorable 'little doll'. Pretty and doll-like in her doll's house with her healthy children and seemingly respectable life, she and her family have it all... or so it seems. Behind closed doors, like a lot of Ibsen's antiheroines, Nora is unhappy and unfulfilled. She is thoughtful, intelligent and trapped, playing the role of a dutiful wife in a situation that doesn't arouse any of her passions, in a society that believes that she shouldn't have any. A fascinating before-its-time window onto a world where expectations of women were streets apart from the contemporary world, Ibsen's masterpiece is a study in strength, determination and hard choices against all the odds.

An Enemy of the People

A true classic and a play for modern times in equal measure. A perhaps unintentional parody on 'fake news', the hysteria of the masses and publicly shaming individuals to the point of breakdown, this story follows one man's struggle to do the right thing and speak truth in the face of extreme social intolerance. Sometimes farcical, sometimes terrifying, An Enemy of the People is a parable for crazy times and a cautionary tale for those who dare challenge the establishment.

As an Audio Show – free for members – when you add The Ibsen Collection to your library, you'll get three plays split into a total of 12 acts, each with a runtime of about 35 minutes.

I was really thrilled with the performance of these classics, however, we’ve apparently lost A Dolls House somewhere in the weeds… the other two plays are great, was looking forward to the third…

Don't miss this great play, great performances and a great translation. You won't be disappointed.

Best audio play I have listened to. The performances are excellent, with distinct voices and texture for each character that keep it dynamic. The story is gripping and provocative, almost perfectly made for an audio performance.

Ibsen's three best known works. with the exception of no tarantella from Nora (can't fault them for that), they translate beautifully.