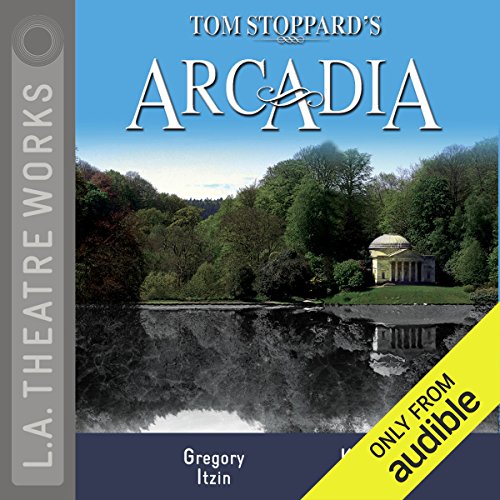 “Tom Stoppard’s richest, most ravishing comedy to date. A play of wit, intellect, language, brio and emotion,” and The Royal Institution of Great Britain calls it: “the best science book ever written.” ( )The New York Times)

Tom Stoppard’s Arcadia merges science with human concerns and ideals, examining the universe’s influence in our everyday lives and ultimate fates through relationship between past and present, order and disorder and the certainty of knowledge. Set in an English country house in the year 1809-1812 and 1989, the play examines the lives of two modern scholars and the house's current residents with the lives of those who lived there 180 years earlier.

Includes an interview with Steven Strogatz, the author of Nonlinear Dynamics and Chaos and professor at the Cornell University School of Theoretical and Applied Mathematics.

Christopher Neame as Noakes and Jellaby

Arcadia is part of L.A. Theatre Works’ Relativity Series featuring science-themed plays. Major funding for the Relativity Series is provided by the Alfred P. Sloan Foundation to enhance public understanding of science and technology in the modern world.

This audible performance of Arcadia is very well acted and produced. My chief criteria for these audible plays are: (1) How closely does the performance stick to the script - i.e. have they omitted a significant portion of the dialog? (2) Sound quality: does it sound like they recorded a live stage performance with a microphone sitting on a corner of the stage, or was it recorded specifically for a listening audience? And do they use sound effects well?

On both accounts this is a high-quality production. It is also a charming, funny and intelligent play.

This dramatization is not quite the playwright's original text, but it takes some helpful artistic liberties that describe scenes and make the unspoken parts of the play flow easily within the dialogue. As far as the play, Stoppard is a master of transforming life's circumstances into math problems. He ruined statistical probability and chance in "Rosencrantz and Guildenstern are Dead." He bashed Zeno's Paradox and geometry in "Jumpers." Now thermodynamics and Mandelbrot's fractals fall victim to the wit and genius of Stoppard; telling his love stories and the tragi-comedic foibles of life through the ages, using sex as the chaotic "strange attractor" that ruins the Newtonian universe. I listened to this dramatization, then read the play, then listened again with even more enjoyment. A friend of mine listened to the dramatization before attending a recent performance in New York, and he said that the audio "preview" greatly enhanced his enjoyment of the play itself. Even if you don't know one thing about entropy or self-similarity, this rendition will provide a delightful brain-teaser.

History, literature, science, gardening...a brilliant girl out of time and some lamebrained literary detective work. Stoppard at the top of his game, and a cast that includes Gregory Itzin, far from the evil Nixonian president he played on 24. You'll never hear the words "carnal embrace" again without giggling, just a little.

Needs more that one listening.

If the interviews that came after the reading had come BEFORE the reading, I'd gotten a lot more of of this -- after all, it's an illustration of chaos theory. I needed a 'heads up'. It is witty, and intellectually stimulating, so I might give it another go.
Two sets of characters in two different time periods are hard to follow by ear alone, unless the performances are carefully designed to be easily distinguishable.

I saw this production in London in 1994 ( I believe this was the year) and was brought back to remember the simple sets. This play was a good choice for audio production and the acting was superb!

Certainly this is a play that rewards listening a few times. But it is also incredibly rewarding, very smart, both comic and ultimately heart wrenching. Highly- very highly- recommended.

Tom Stppard has a way of convert complex mathematical theories into eloquently written plays with memorable characters. He does this again with 'Arcadia'. Natural science goes head to head with Newtonian laws in provincial Derbyshire as a genius child, her gruff tutor, a cuckold Lord, an antagonistic researcher and others dance through Stoppards language and conceits. Add in the brilliant cast and productions values and you have a winner with this production. That's a good thing for me, not being a theorist of any kind. But I can appreciate a well written play, excellent acting and the ability to expand my horizons and this play offers all of these with a wit and accessibility for everyone.

Well performed and has a good bonus interview

We bought this after being frustrated at a live performance where we couldn’t make out all the words. This recording exceeded our expectations, with clear dialog delightfully dramatized plus the interview about chaos theory and how the play relates to what went on in real life.

So glad to have found one of my very favorite plays available through audible! Fond memories of the original Broadway production and the revival made me wary to listen to a different cast, but the performances were fine all around. Gotta love Stoppard for his ability to combine so many cerebral disciplines into a fun & entertaining play.

What did you love best about Arcadia?

What I loved most? Wow, I'd be hard pressed to say since the entire play is great. I could pinpoint a favorite line, but I don't want to spoil it for anyone.

Thomasina, for sure. I've always imagined having a daughter like her. Something about a strong willed precocious female protagonist really draws me in.

Have you listened to any of the narrators’s other performances before? How does this one compare?

This was an ensemble cast rather than a single narrator.

I had to analyze this play for a class and I can't wait to listen to it again. The actors are superb and foley is spot on. I read this play while listening to it at the same time; there are very few liberties taken with stage direction, but the ones that were better served the listening experience.

While this witty and erudite play text provides both entertainment and intellectual challenge, problems with the production rather spoiled my enjoyment.

This isn't really relevant to a drama text.

What aspect of the narrators’s performance might you have changed?

Well, this isn't an audiobook, but an audio production of a play, so there are multiple voices. Here lies my main problem. As a UK listener, I could not suspend my disbelief in the English accents of some of the American actors playing British roles. They weren't terrible, and a US listener might not have a problem with this aspect of the performance. However, it is not just a matter of pronunciation or vowel sounds. Sentences were stressed in an unidiomatic way, and meaning was sometimes lost.There are some complex mathematical and intellectual ideas presented here, so clarity of meaning is important.

The play is split into two time frames, that of the 18th century juxtaposed with a modern setting. It seems to me that the actors chosen for the 18th century sections were native Brits (or if not, American actors with impeccable accents and delivery.) The contemporary sections are voiced with American actors who can't quite get it right. The production also sounds under-rehearsed in the contemporary sections, with some rather emotionally unvaried performances.

There are also some visual effects which are hard to reproduce in audio format, which could have been edited out.

I have listened to many LA Theatre Works offerings and they are generally excellent. Even the Ayckbourn plays with mixed US/British casts are almost completely convincing. This was a disappointment.

Was Arcadia worth the listening time?

Not entirely. This is a stimulating but complex text which is nearly 3 hours in length. It needs better acting and direction in parts to justify the committment from the listener.

There are some very good things about this recording. It's clear, entrances and exits are by and large well delineated. It makes sense, allowing for the complexity and farcical nature of the narrative. The fact that a significant character who never speaks may or may not be in the room is a problem for any audio adaptation.

It is unfortunate, however, that a very significant character bears the surname Nightingale. Pronounced in English English with almost equal stress on all 3 syllables, pronounced by these actors as a dactyl (NITE-n-gale) with the last two syllables swallowed. Consequently, every time the character is referred to, I wince, and that, and other pronunciation infelicities, makes this an unhappy listening experience. I suppose if you don't know it's wrong, it doesn't matter. Maybe calling General Powell COLL-INN, not colon, seems very wrong to American listeners.

Excellent play and most of the actors good but some of the accents a bit dodgy. The people playing Bernard and especially Chloe mispronounce Nightingale every time and their accents are wobbly. Chloe sounds a bit like Dick Van Dyke in Mary Poppins. the actors playing Hannah and Thomasina are very good.

Excellent but you need a copy of the written play to follow it, especially the last scene since the stage directions, which are not read outloud in this recording, play a crucial role, keeping that in mind it is a great play and very well performed.

I was a little reluctant to listen based on previous reviews about the accents of the American actors. I eventually bought it as I wanted to hear a dramatic performance and found it on the whole an enjoyable experience. You would have to be very picky to find the accents annoying so if you are doubtful like I was then go for it and don't be put off.

Best play of the 20th Century

This recording is fine - the actors are just ok.
The play itself? Unsurpassed. It really needs to be watched rather than just listened to, but however you access it there is something magical to find. Literally, structurally, philosophically, scientifically, mathematically... In my opinion, the 20th Century gave us no better English language play.

One of the most amusing and inventive plays of the last fifty years but this production fails to do it justice. Some very uncertain pronunciation and at times poor articulation and generally the parts are under characterised. Such a pity.

Would you consider the audio edition of Arcadia (Dramatized) to be better than the print version?

Although the question of comparing a printed version to the audio edition is somewhat strange, as it is a play, I prefer the audio version of Arcadia.

A great, great play - heartily recommended. Stoppard at his finest.